Huertas first worked with Book-it, whose ethos is adapting books for the stage, as an actor in its production “Welcome to Braggsville” earlier this year, for which he received a nomination at this year’s Gregory Awards for Best Actor in a Play.

It was during that show when founding co-artistic director Myra Platt assigned him to write songs for “Howl’s.”

Huertas recalls, “When she told me they had secured the rights to adapt the book, I literally fell on the floor with a ‘Yaaaas!'” Platt is adapting and directing the show.

“Howl’s Moving Castle” is by British author Diana Wynne Jones, first published in 1986, wherein Sophie Hatter is turned into an old woman by a witch and seeks the notorious wizard Howl and his fire-demon Calcifer to help her break the curse.

The role of Sophie will be played by Filipino American actress Sara Porkalob, who recently concluded her one-person play “Dragon Lady,” about her Filipino gangster grandmother, for Intiman Theatre. (Read about it here.)

The book had been previously adapted by Japanese animation company Studio Ghibli into a film in 2004, directed by Hayao Miyazaki.

He’s excited for Miyazaki-philes like himself (“I’m a huge fan of the Studio Ghibli films,” he says.) to come watch the musical. “It’s cool that there’s this whole amazing fanbase for the movie, and a large portion of those fans have never even read the book, so this musical will have a lot of plot points and characters they’ve never seen.”

Huertas was born and raised in Seattle. “First generation Filipino on my dad’s side, second on my mom’s.” He studied theater at Pacific Lutheran College and has not stopped working since graduating in 2009. 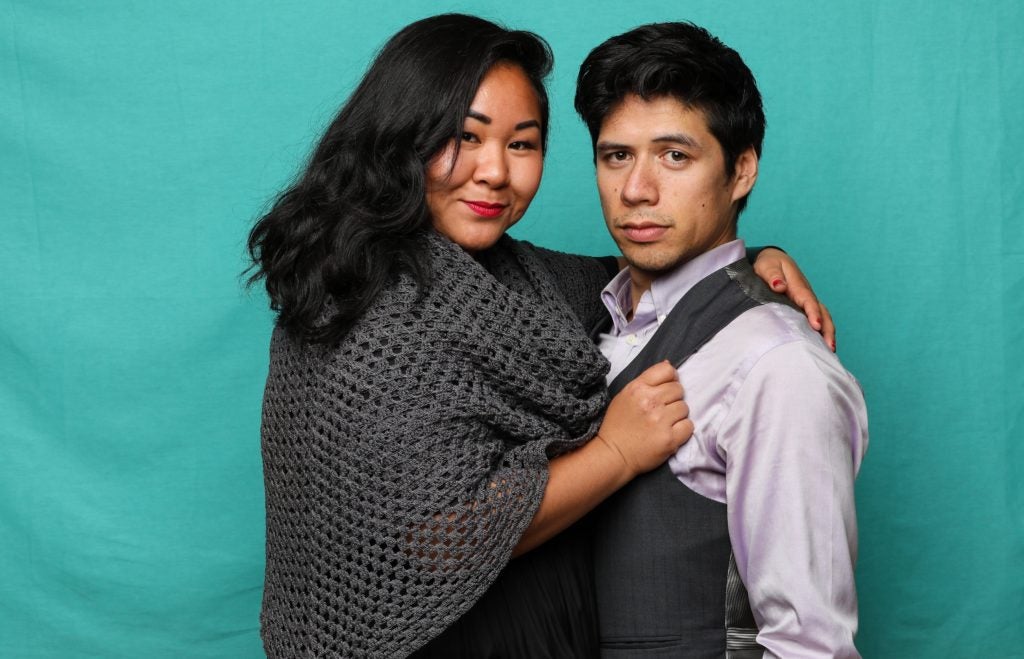 He started off with acting gigs at Seattle Repertory Theatre, then playing cello in the national tour of the Broadway musical “Spring Awakening” for eight months, then back to Seattle Rep to play Rod in the staging of “Avenue Q” (Seattle premiere), then writing and acting in his first musical, “Lizard Boy.”

Seattle Rep artistic director Jerry Manning knew Huertas as an actor first. When he found out Huertas also played the cello and was a fellow comic-book lover, a commission for the musical was assigned. Huertas went on to develop his coming-of-age love story cello-rock musical about a young gay boy who develops lizard superpowers, which premiered in 2013.

“The way I write can vary,” Huertas says of his composing style. “Sometimes I find a melody by noodling on a guitar, but most of the time, I free-write in character, then some magical line will appear to me.”

He always composes songs using a guitar. “My writing style fits somewhere in between pop-musical theatre and folk-rock. It’s an easy access point emotionally for me, because it’s the kind of music I grew up listening to.”

For “Howl’s,” Huertas found inspiration from the book itself. “The awesome thing is that Diana Wynne Jones has done all of that work for me! I find a magic sentence in her book and, boom, I’ve got a song!”