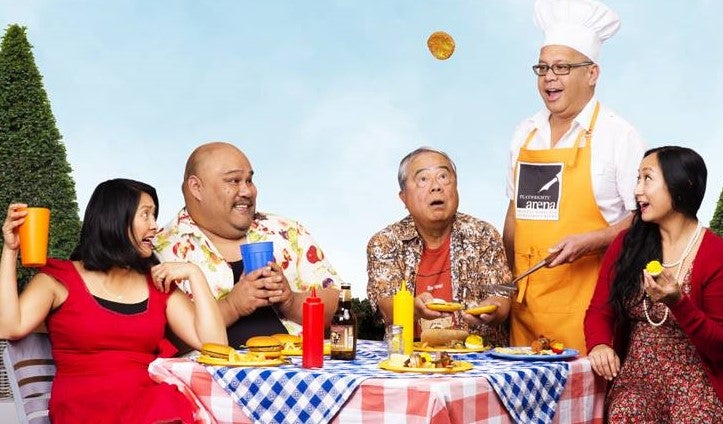 LOS ANGELES — “Bloodletting,” a play that involves two Filipino American siblings and their encounter with the supernatural creature aswang, will kick off this year’s Block Party program at.

The program, organized by Center Theatre Group, highlights Los Angeles theater work and encourages collaboration by presenting three recently-staged productions from local theater companies. Each production will be staged for a two-week run.

“Block Party will shine light on the diversity of our programming at Playwrights’ Arena and further showcase our work,” said Rivera. 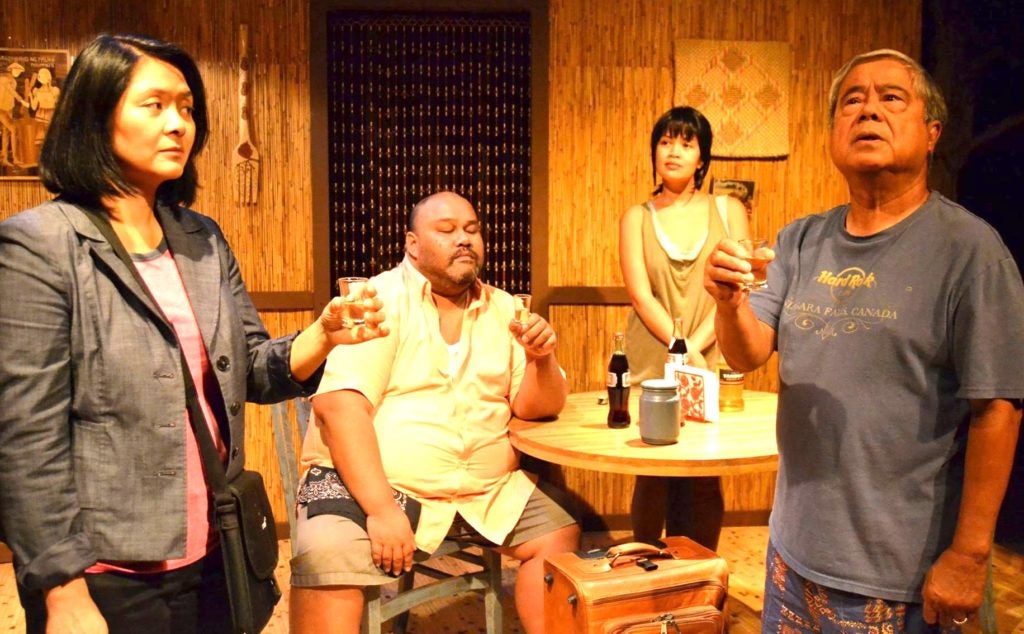 Scene from 2016 staging of “Bloodletting.” CONTRIBUTED

The play was premiered in 2016 by Playwrights’ Arena and proved popular enough with audiences that its run was extended until 2017.

The original cast will reprise their roles for the 2018 staging. Included are actors Alberto Isaac, Myra Maracine and Anne Yatco. Playwright Boni Alvarez is also part of the cast.

Maracine plays Farrah, the sister. The first time she read the script, she found it “exciting and edgy and unexpected.”

“I remember thinking wow, this is some crazy Filipino folklore taken to another level,” she says.

Born in Manila, Maracine’s family moved to Canada when she was three years old. She moved to the US after high school to attend the acting conservatory program at American Academy of Dramatic Arts in California.

Yatco, on the other hand, plays Leelee, a character that the siblings encounter in the Philippines. The first time she read the script, “I was immediately struck by the brother-sister relationship between Bosley and Farrah.” 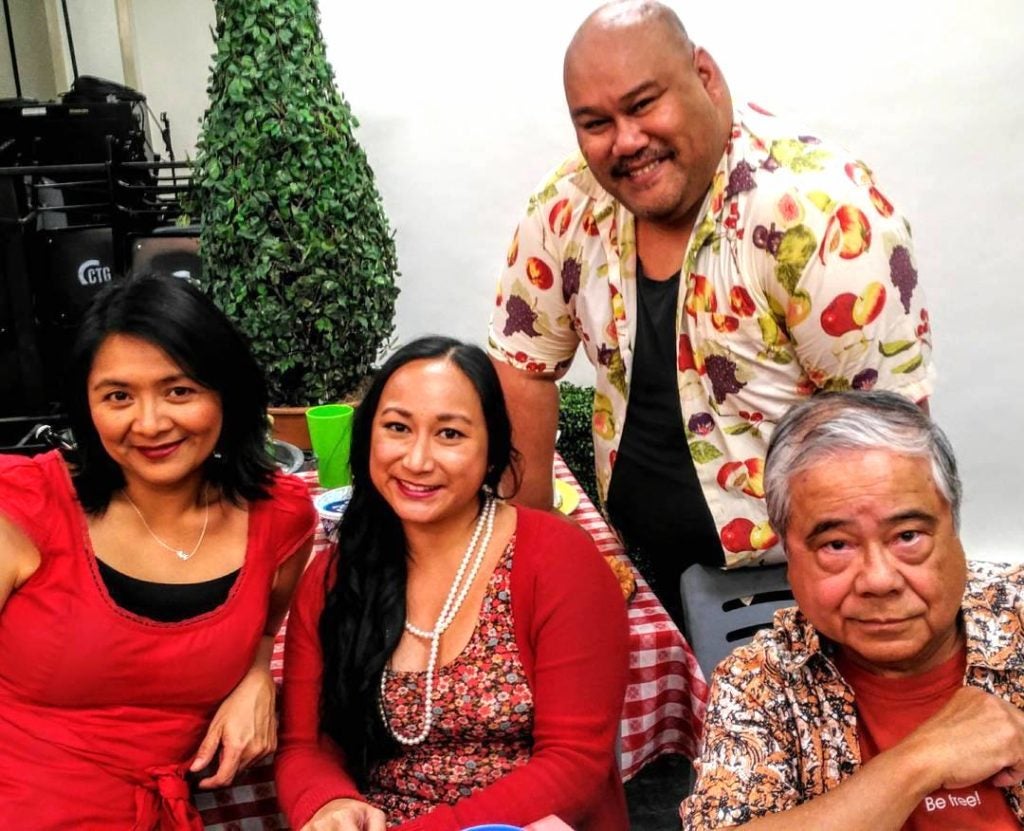 Yatco has a master’s degree in acting from the California Institute of the Arts and also does improv and voice-over work.

The siblings’ relationship to the Philippines as Filipino Americans also resonated with Yatco, who was born in Phoenix, Arizona.

“I’ve visited the Philippines once, while I was in high school, but I can relate to that dual feeling of recognizing something familiar about the country, but also feeling completely foreign at the same time.”

Both Maracine and Yatco are excited to revisit the roles they inhabited previously.

“Last year, I joined the production for the final three weeks of the extension, replacing the awesome Evie Abat. I had to learn a lot in a very short amount of time,” explains Yatco.

“I’m looking forward to have the opportunity to dig a little deeper and really get to play around with the character for this run!” she adds. 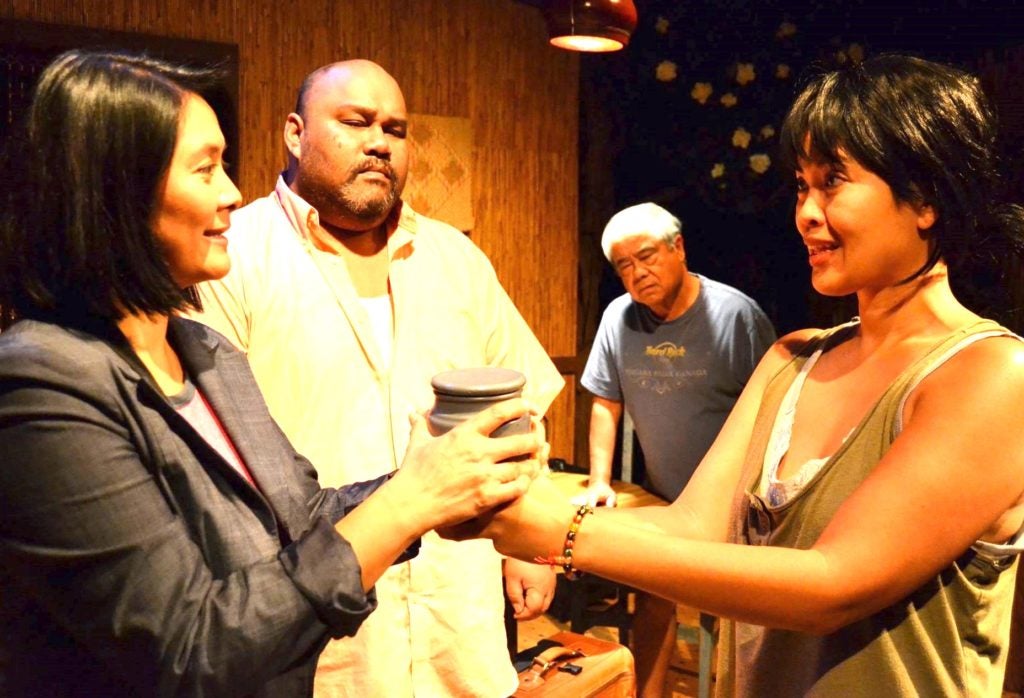 In “Bloodletting,” two Fil-Am siblings return to the Philippines to scatter their father’s ashes—a scene from the 2016 staging. CONTRIBUTED

Maracine says there are layers to the Farrah character that she wants to explore some more this time around. “And there will be new layers that I know I will discover in this process,” she says.

One Filipino mythological creature that stands out to Yatco is the tikbalang. “I find it amusing that there’s this half-man, half-horse that just pranks travelers and makes them get lost.”

For Maracine, she finds the manananggal (creatures who look like women whose torsos can split at the waist and fly off into the night) the most fascinating and scariest creature.  “I know they are a special breed of aswang that Boni writes about.”

“The duwende itim (black elves) kinda cracks me up, and sounds more mischievous and vengeful when you anger them. The boogeyman’s got nothing on these Filipino creatures!”

Maracine adds, “In the end, this play is not just about the Filipino culture and folklore with aswang, it’s about these people and their relationships with one another.”