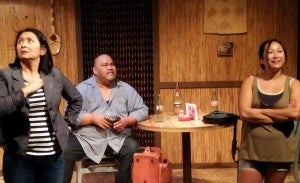 Premiered in October last year and scheduled to originally close in November, the play was extended until January of this year.

“The production was well-received. It surprised me a little,” Alvarez admits, believing that it resonated with theatergoers because “there are many points of entry for the audience.”

Directed by Jon Lawrence Rivera for Playwright’s Arena, the play is about two siblings who travel to the Philippines to spread their father’s ashes when the sister discovers her latent powers.

“There were people who loved the mythology, people who are fans of witches of all cultures.  Most of the audience accessed the play through the brother-sister relationship.  Some people loved the ‘foreign-ness’ of the play, an escape to a remote locale they know nothing about.”

Over the past few years, Alvarez has been steadily crafting plays that connect, combine and collide elements from the two countries that have shaped who he is.

For this play, he drew on childhood memories. His parents are from Antique province in the Philippines, a region believed to be a nexus for supernatural creatures.

“I’ve always been fascinated by aswang,” he says. “Especially because we only heard about them when we were behaving badly.  My parents would threaten that the aswang would get me if I wasn’t good.”

During a visit to the Philippines when he was four years old, his family actually introduced him to an aswang who lived across the street from his grandmother’s home.

He said in a previous interview that the introduction was a courtesy, “So that she wouldn’t curse me or what not. She seemed like a normal woman, just another person in the village.”

In the play, he uses the mythology “as the inner monster of the main character, that her human behavior is an extension of her inner self.”

Alvarez entered theater as an actor first before he shifted to playwriting.

“In the seventh grade, I saw an audition notice for the Palo Alto Children’s Theater. The play was ‘Rumplestiltskin’ and I was cast as Hilard, Master of the Household.  I loved the experience and continued performing in more and more plays.”

He went on to study theater at Sarah Lawrence College. “I did some plays in New York and went to the American Repertory Theatre Institute at Harvard University for an MFA in Acting.”

“After grad school, I went back to New York, but my hopes fizzled out. I had an agent, I was part of Actors Equity, but I wasn’t getting very many auditions.”

He’d taken several playwriting classes in college and remembered a professor telling him that he had a lot of potential as a playwright.

“I moved back home with my parents, took some more playwriting classes and, after a few years, went to the University of Southern California for an MFA in Dramatic Writing.”

Now based in Los Angeles, Alvarez has been adding Filipino American stories to the fabric of the US stage.

And while having been born and raised in the San Francisco Bay Area in East Palo Alto himself, he’s incorporated immigration as a plot element in some of his works.

To wit: “America Adjacent,” where pregnant women from the Philippines attempt to give birth in LA so that their children will have US citizenship; “The Special Education of Miss Lorna Cambonga,” an immigrant Filipina schoolteacher who leaves her son in the Philippines to teach in LA; “Dallas Non-Stop,” where a call-center agent in the Philippines tries to score a US visa.

Outside of LA, his plays have been produced or developed in New York, Phoenix, Philadelphia, and at the Oregon Shakespeare Festival. 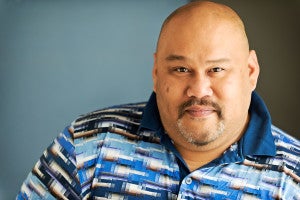 As for acting, he actually had to step in during the run of “Bloodletting” when an actor became unavailable. “Audiences were very kind about my performance. It’s been surreal, jumping back into acting after over a decade. But the experience has been eye opening and I’m excited about exploring acting again, especially with all of the opportunities that didn’t exist fifteen years ago.”

“I write every day,” Alvarez says of his process. “It can be as much as thirty pages or as few as two.”

He qualifies that “writing” can mean the many different things that need to be done in order for actual writing to happen. “Sometimes it’s revision or research. Right now, I’m working on a play set in the Philippines during WWII so there’s a lot of research involved.

“Sometimes, it’s reading a novel that might inform the world of my play. Sometimes, it’s something as simple as brainstorming character names or thinking about a play’s title.”

For the rest of this year, adaptations are also in the works. In June, Alvarez’s play “Nicky,” a modern adaptation of Anton Chekhov’s “Ivanov,” will be staged by Coeurage Theatre Company.

“I’ve made Nicky’s wife, Anna, a Filipina. In Chekhov’s original, Anna is Jewish and Ivanov turns her culture against her in a very mean and unfair way. I wanted to explore what it’s like for a Filipino immigrant to find herself in the middle of another group of immigrants, in this case, a Russian family.”

In September, his play “Fixed” will be staged by Echo Theater Company. An adaptation of Pedro Calderon’s “The Physician of His Own Honor,” Alvarez reconfigures the story to feature ladyboy masseuses who work at the House of Malacañang Massage in LA’s historic Filipinotown. A forbidden love affair soon catches the attention of the city’s hottest political family.

And if any theater groups are interested, he says, “One day, I would love to have my plays performed in the Philippines.”