After seeing the “Doodles NFT” title, you may have rolled your eyes and thought, “Another NFT project, huh?” Many people share the same feeling as we’ve seen so many silly things from the NFT space. Yet, this rainbow-colored project may just be headed for a bright future.

This project wants to make NFT tech more accessible for regular folks. That’s why the Doodles NFT team allows everyone to have a shot at growing the collection. If you’re not good at drawing, you may still support the project by buying one yourself.

First, I will talk about the creators of the Doodles NFT project and how the project grew. After that, I will discuss what sets this project apart from others. More importantly, we will discuss how you can be part of this new trend.

What is a Doodles NFT? 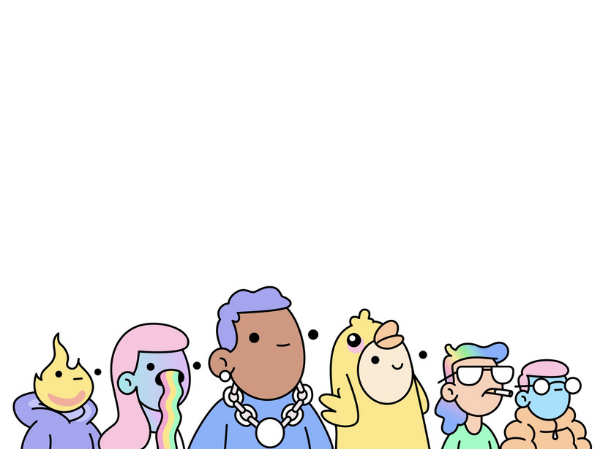 If you’re not familiar with NFTs, let’s get you up to speed. The acronym stands for “non-fungible token,” a piece of digital media with ownership recorded on a crypto network or blockchain.

This lets a person own a unique copy despite the numerous copies available. Even if someone copies and pastes it on the internet, they can’t get the person’s ownership record.

NFTs have many other uses, but people are paying more attention to the NFT art world. That’s because it’s filled with unusual collections like the one from Doodles NFT.

This digital art collection started from prominent names in the NFT space: Evan Keast, Jordan Castro, and Scott Martin. They have “working aliases” in the NFT world.

Keast also goes by the name “Tulip,” Castro’s is “Poopie,” and Martin’s is “Burnt Toast.” Yet, they helped launch the famous CryptoKitties NFT project in 2017.

After a few years, other projects like Bored Apes Yacht Club, Cool Cats, and CryptoPunks. On October 17, 2021, they released the first 10,000 Doodles NFTs.

The team mixed characteristics from earlier projects like those we mentioned to create this collection. The Doodles include a random assortment of apes, cats, pickles, and more in rainbow pastel colors.

The Doodles founders knew that this was a relatively high asking price. Yet, they pushed through because they needed an initial treasury of roughly 420 Ethereum coins.

Then, the team made another bold move. Once their Discord server reached 1,000 members, they closed it off to new members. This boosted exclusivity within the Doodles community.

This drew mixed reviews from onlookers as it provided whitelist access to a select few. This means only the original Doodles holders could get new NFTs created.

Despite this, the Doodles NFT project continued to grow. People changed their minds about the founders’ decision to close the Discord server. Now, they see it as a great way to reward early adopters.

Read More: What Is The ECOMI NFT Platform?

What sets it apart from the other NFT projects?

Most people won’t see the appeal of the Doodles NFT project outright. It’s a fair point because it may seem like any other similar project based on its initial development.

Fortunately, a project manager for the Doodles project named Mushy shared the four reasons why this one stands out. The first one is the collection’s inclusive aesthetic.

The art pieces feature different subjects, yet they’re all mostly rainbow-colored. Second, the founders have launched other successful projects in the NFT space.

Third, the NFT Doodles stand out because they don’t need the usual ways to build hype. If you’ve seen other projects, you may recall how they keep using buzzwords like “roadmap” or “token.”

Some even include way too many emojis. As time passed, people found this approach annoying, so they avoided such projects. On the other hand, the NFT Doodles didn’t need such tactics.

Instead, the community stayed humble and explained the project for what it was. As a result, this drew more people to the project. The other three reasons will take a bit more explaining, though:

🚀🚀 all the way to space with @doodles pic.twitter.com/NzX0ai5INH

I mentioned earlier that Doodles NFT is a community-driven project. That’s because it works like a decentralized autonomous organization or DAO. It’s like a regular company, except the members are in charge.

They get to join the DAO by owning Doodles. Each one is worth a vote for community initiatives. People may submit proposals for new art pieces. Remember the initial treasury we talked about?

This voting system is in charge of coordinating the Doodles community treasury. The Pukenza and Noodles collections were the latest that came from this.

Should I buy a Doodles NFT?

Had to stop my show to celebrate my excitement on my doodle! Nfts make me feel like a kid again 🎁 @doodles pic.twitter.com/hJU0rE3EpT

You can find the latest NFT Doodles on the project’s homepage. At the time of writing, it was the Space Doodles collection of cartoon spaceships. It doesn’t host public sales on the website.

You may purchase them from three NFT marketplaces: LooksRare, OpenSea, and Nifty Gateway. You will need a digital wallet to buy, sell, and store the NFT Doodles.

MetaMask is the most common choice, but you may try others like the Enjin wallet. Check their websites for the types of crypto wallets they accept.

Most importantly, you might be wondering whether you should buy any of these NFT Doodles or not. The answers to this question will depend on what you want to do with them.

You may want to own some because of the hype. After all, you can find so many celebrities buying them nowadays. For example, Steve Aoki showed his Doodles NFT at a concert.

Gary Vaynerchuk, or “Gary Vee,” is another big Doodles NFT holder. He launched his NFT collection last year dubbed VeeFriends. If you’re not into trends, maybe you like how they look.

Some people like to scoff at the idea of collecting NFTs. Then again, you may want to look back at other people who collect Funko Pops, baseball cards, and other stuff.

We have to admit that others buy the NFTs to sell them for a profit later. Still, you can find other people who truly see value in collecting these things.

If they collect Funko figures, you may find the cute characters propped on their desk. Baseball card owners may protect their collection within a plastic binder.

It’s fine to buy them, but just make sure you have a good reason for it. More importantly, make sure you’re willing to spend thousands of dollars. Otherwise, you may want to find another hobby.

What Are Funko NFT Figures?

What Is The OpenSea NFT Marketplace?

Doodles NFTs aren’t the only ones you can buy. For example, Funko Pops are now available as NFTs. If you get lucky, you may earn a rare physical figure!

If you’re more into sports, you might want to try Chiliz. It lets you buy NFTs of your favorite sports teams. The platform also lets you meet fellow fans.

You may also want to read more Inquirer USA articles. They can tell you more about NFTs and the latest projects. You can even go beyond and learn about cryptocurrencies and blockchain tech.