VR stands for Virtual Reality, and it is a gaming device that allows players to be completely immersed in a virtual online setting or environment. The best VR games typically provide two things – an efficient immersive experience and loads of fun. Unlike playing with regular game consoles, you are catapulted into another dimension of the gaming experience with VR games.

We have put together this list of the best VR games you can play, no matter your preference. This VR game guide features horror games, mystery games, escape rooms, and even first-person shooting games.

All VR titles included in the list below are compatible with a variety of headsets. So whether you use a PlayStation VR headset or Valve Index headset, there’s a game here for you.

Here are the best VR games at a glance: Description: Batman: Arkham VR was released as an unexpected VR game following Arkham Knight by Rocksteady Studios. This incredible VR game comes across as an independent game rather than a sequel or prequel to the known Arkham mythos.

This game offers you a 90-minute (which may seem a little short to some players) DLC-sized immersive experience at less than what you would typically pay for the full-priced version of the game. 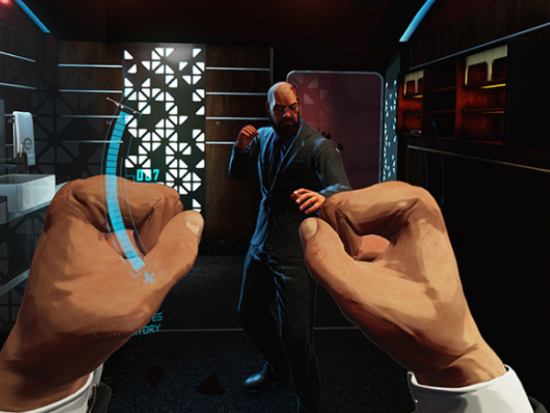 Description: Made by Twisted Pixel, this spy action VR game is a Mission Impossible joyride. It packs an immersive punch and offers a lot of free movement while playing. If you enjoy active first-person shooter games, then this game will knock your socks off.

Please note, for now, this game is an Oculus VR exclusive.

Description: Half-Life: Alyx is one of Valve’s pioneer VR games, and it is also one of the first new additions to the series in more than a decade. Before its release, there were speculations that it may not be as great as expected, but it threw everyone’s doubts out of the water. This game is so good that it is one of the best VR games anyone can play right now.

Half-Life: Alyx is a mind-twisting VR ride with an excellent movement and dynamics setup. It brings all the innovative, challenging puzzles in the PC game versions and combines them with nerve-wracking rides through zombie-filled death craters.

Description: Moss is a family-friendly VR game, like Beat Saber and Keep Talking and Nobody Explodes that follows Quill’s protagonist through her adventures. The tiny-sized Quill runs through ruins and forests in her quest to save her uncle.

In this VR game, you get control over both the hero avatar and the surroundings. You get to escape enemies and solve puzzles, to control elements. It is the perfect laid-back VR game to play with friends and family.

Description: No Man’s Sky is a survival-adventure-action game developed by Hello Games. It takes the original conventional console version to another level, giving an already classic adventure game immersive dimension.

Combining a stunning open world with exciting quests gives this VR game a certified top spot on the list of best VR games.

Description: Skyrim is one of the most popular names in the gaming sphere, and it is now available on PlayStation VR, Oculus Rift, and HTC Vive. It is arguably one of the best VR adventure games so far. Not only can players re-enact the complete Skyrim game in VR, but they can also play Dragonborn DLC, Hearthfire, and Dawnguard.

There’s just one issue with this VR game, though: some elements and graphics are obsolete. However, players can fix this problem by using mods.

Description: Star Wars: Squadrons is a Motive Studios VR game based on the legendary Star Wars. For newbies and old Star Wars fans alike, it offers an exciting, immersive way to make their fantasies quite real.

In this game, players can be both Imperial and Rebel pilots in a ship-to-ship combat-focused flight simulation. In addition, the game offers single-player campaigns and multiplayer modes.

Although Star Wars: Squadrons is not exclusive to VR, the experience of using a VR headset gives an extra edge to the whole game. The experience of flying around in a TIE Fighter or X-Wing is simply unmatched.

The only major downside to this game is the lack of story depth. Still, the level of immersion is enough to make up for it.

Description: Superhot made its first entry into the gaming world in 2013 as a browser-based demo game. Presently, it is now a VR-compatible shooter game. It utilizes its 360-degree tracking to place enemies all around you as you shoot.

Another exciting feature of this game is the slow-motion time capability, which makes playing it in a huge space the ideal way to go. As the game gets harder, you will require all the cover possible to evade incoming attacks while destroying enemies with your guns, fists, and shurikens.

Description: This comedy VR game creates Squanch Games (founded by Rick & Morty co-creator Justin Roiland). Bearing that in mind, the game feels like a Rick & Morty-type adventure but with different characters in space. Trover Saves the Universe is packed with crazy stories, wild missions, mind-boggling worlds, funny voices, and odd alien characters. For VR gamers that enjoy odd humor, this game is one of the best choices available.

Trover Saves the Universe has been available on Xbox One, Nintendo Switch, and PS4 since 2019, but it was released for Oculus VR in June 2020. This VR game avoids the typically awkward and nausea-inducing issues common to other games by positioning you in a chair that functions as the user interface. From this chair, you can control Trover, the main character, even from a distance away. You can also teleport your control chair to various spots in the game while playing.

How Do I Get VR Games?

VR devices, like smartphones, have dedicated app stores and VR platformers. You can browse through the games and apps available on the VR stores and download whatever you want, and you can access these stores through either your computer or the VR device itself.

Why the Metaverse Workplace Could Change the Future

What Can I Use To Play VR Games?

The best VR games for you are hinged mostly on your preference and the kind of headsets you own. We considered these two factors while curating this list of VR games to play in 2021. From classic shooter games to puzzle mysteries, we covered it all. All that’s left is to get your game on!

MOST READ
Gadgets Top 10 Video Doorbell Cameras On Amazon
Gadgets Amazon may soon unveil a new Alexa feature to mimic anyone’s voice
Gadgets Bring Game Time Anywhere With the Best Gaming Phones
Gadgets 12 Best Travel Cameras to Capture Every Moment in 2022
DID YOU KNOW?
5 Best Noise Cancelling Headphones of 2022
The Shakti Mat: Does It Really Work?
12 Best Travel Cameras to Capture Every Moment in 2022
Top 10 Best Fitness Trackers on Amazon
How to Shop for Engagement Rings Without Breaking the Bank
Top 10 Resorts in Hawaii for a Summer in Paradise