6 theories on the Moon landing being fake

Go around the internet enough, and you’ll find people who believe the Moon landing’s fake. We have so many photographs and other evidence. Yet, they have their reasons why those don’t prove anything. Unfortunately, more people are following these hoax theories because of social networking sites.

Let’s discuss humanity’s historic step on the surface of the Moon. Then, we’ll go through some of the reasons why some folks don’t believe this ever happened. We’ll also dive deeper into why people fall for these bizarre and misleading ideas. More importantly, we will help you avoid these conspiracy theories.

People have believed these weird theories before the internet. Because of social media, more of these are spreading on numerous websites. More folks are following misinformation, and it’s having a negative effect outside our screens. Being aware of fake information lets you avoid harming yourself and everyone else around you.

The first Moon landing in history 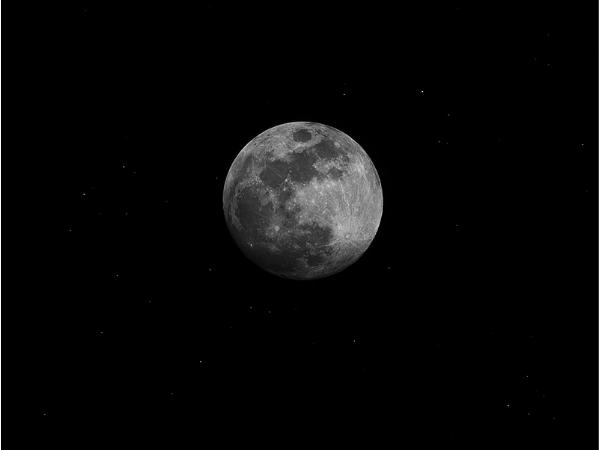 Let’s begin with a summary of the Apollo Program and the astronaut Buzz Aldrin. After, we’ll explain why people don’t believe this critical piece of history.

On April 12, 1961, Yuri Gagarin became the first person sent to the Earth’s orbit. President Kennedy wanted to challenge this feat, so he decided the US will put a man on the Moon.

On July 16, 1969, astronauts Neil Armstrong, Michael Collins, and Buzz “Edwin” Aldrin rode the Saturn V rocket at the Kennedy Space Center. At 9:32 AM, the Apollo 11 spacecraft took off.

When they reached lunar orbit, the two spacemen climbed into the Eagle lunar module. Meanwhile, Collins orbited in the Columbia command module.

The Eagle was supposed to go down the Sea of Tranquility. However, Armstrong manually piloted the craft. During the last moments of descent, the Eagle sounded alarms.

Related Article: How Much do Tesla Cars Cost?

The first humans on the Moon

The module landed on July 20, 1969. Mission control celebrated the success. Later, he climbed down the ladder and said, “That’s one small step for a man, one giant leap for mankind.”

Later, Aldrin sets foot on the surface. He and Armstrong went around for two and a half hours. They took Moon rocks and pictures as they went along.

They left an American flag in honor of the Apollo 1 crew. Then, Aldrin and Armstrong went to the Columbia with Collins. They traveled back to Earth, and they arrived near Hawaii on July 24.

You could check all the Apollo missions on NASA’s website. We have lots of proof about the first humans on the Moon. Still, some people think the Moon landing’s fake!

Why some people think the Moon landing’s fake

Nowadays, we have lots of sites that point to the “fake Moon landing.” The denial started with folks like Bill Kaysing. Soon, the internet filled with Moon hoax theories.

We have photos of the landing site and the lunar surface. Yet, some folks saw them as proof that the Moon landing was faked. Sadly, more people believe false info even today.

We’ll explore some of the fake Moon landing theories on the internet. As we discuss, you’ll learn why they’re false. Later, we’ll explain why folks fall for these weird ideas. 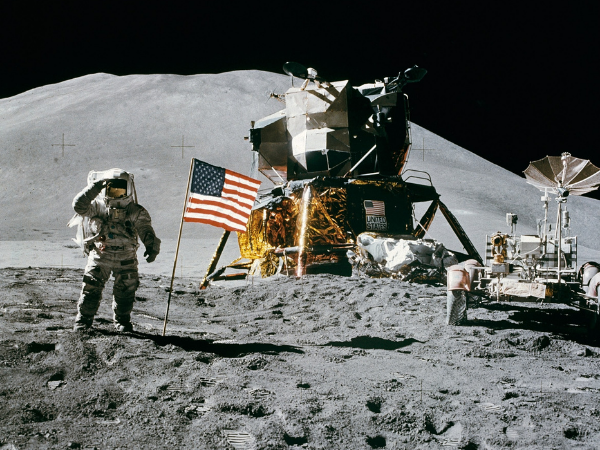 Most people know that there’s no air in outer space. Yet, the American flag appears to be flapping if you check the moon landing footage. Some believe it was filmed on Earth where there is wind.

According to Rick Fienberg of the American Astronomical Society, the flag wasn’t ordinary. If the Apollo crew did, it would just hang as it would on Earth when there’s no wind.

Instead, the flag had a rod inside to make them stick out. It doesn’t go all the way, so it ripples when the astronauts were around. When they step away, the flag stays bent.

Besides knowing space has no air, some know that our planet has the “Van Allen” radiation belt. A person would die if they entered that area. That’s why people don’t believe the Moon landing.

What conspiracy theorists fail to see is that astronauts don’t hang around Van Allen. They just zoom past it to wherever they should be outside the planet.

If Armstrong and Aldrin hung around that area, they might not have made it to the Moon. National Space Center Discovery Professor Anu Ojha said it’s like firewalking.

If the Moon landing isn’t fake, why aren’t there any stars? 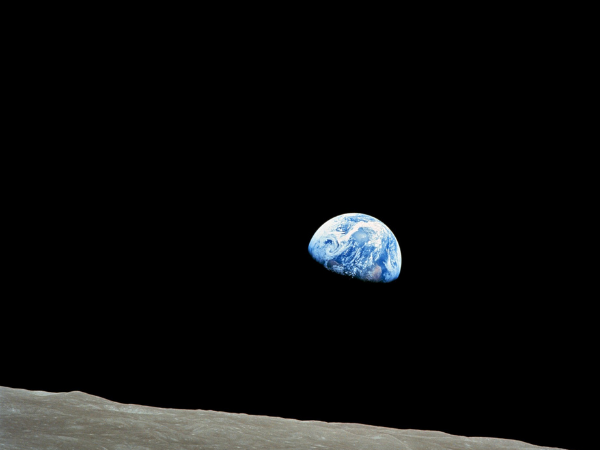 It’s because of the camera the space team used. Its exposure was too short of capturing the dimmer stars along with everything else on site.

You could try it in your neighborhood. Go to your back porch at night, then turn the lights on. Take a pic of the stars using a quick-exposure camera. You won’t see the stars in the photo.

Many people saw the pictures from the Moon landing. Some noticed Armstrong reflected on Aldrin’s visor. They find it odd that Armstrong isn’t holding a camera.

They were expecting the astronauts to bring a regular camera into space. Maybe they didn’t because it would be hard to use while wearing bulky spacesuits.

Instead, cameras were built into the suits for convenience. You’ll notice Armstrong’s hands positioned on this device.

The Moon landing’s fake because the shadows were wrong 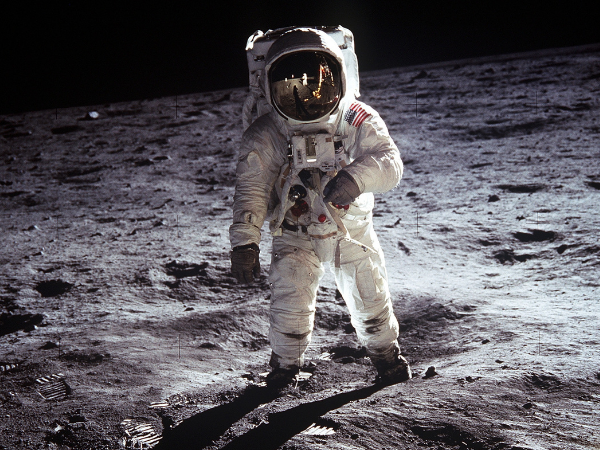 Some objects could be seen in the Moon landing pictures, even if they’re behind clouds. Certain people thought it’s artificial lighting because the sun’s the only light source.

In truth, the sun isn’t the only source of light on the Moon. The lunar surface reflects sunlight too. It’s why we see the moon faintly glow during night time.

This is why some objects were well-lit even when they’re in shadows. The Moon’s surface illuminates the scene as well.

Movies have started becoming more realistic during the time of the Moon landing. Some believed that directors possess the talent to stage the event on Earth.

Many people point to the legendary director Stanley Kubrick. After all, he made 2001: A Space Odyssey so realistic that they believed he could be the mastermind.

Ironically, Kubrick requested the assistance of aerospace engineers to help him create his masterpiece. He used accurate info to craft a realistic outer space movie. Nowadays, more people believe that the Moon landing’s fake. It’s not the only weird theory that’s gaining more followers, though.

For example, you’ll find a growing Flat Earth community on the internet. Some basketball stars like Shaquille O’Neal and Kyrie Irving said the planet is flat.

Fortunately, Irving apologized for his Flat Earth comments. We still have plenty of people who keep believing, though. The internet may have helped fuel these conspiracy theories.

Social media helps them meet others who hold these beliefs. They form an echo chamber where they only hear their talking points. This strengthens their faith over time.

Government distrust also helps theories spread. It may be the reason for the many COVID-19 ideas floating on the internet.

People worldwide struggle due to the lockdowns, but they haven’t received help from their governments. With no end in sight for the crisis, they become more upset with the authorities.

As fewer people trust these institutions, they’re more likely to believe false info. It’s a significant reason why dealing with the virus takes longer than it should.

People believe that the Moon landing’s fake and other weird stuff. Still, the United States has continued its space missions. NASA plans to return to the Moon in 2024.

Recently, Elon Musk has tried to send more rockets into space. Tesla’s CEO is planning to send SpaceX rockets to Mars as well.

Scientists will continue to learn more about space. Everyone has that burning desire for discovery. It’s only a matter of time until it sends us further among the stars.