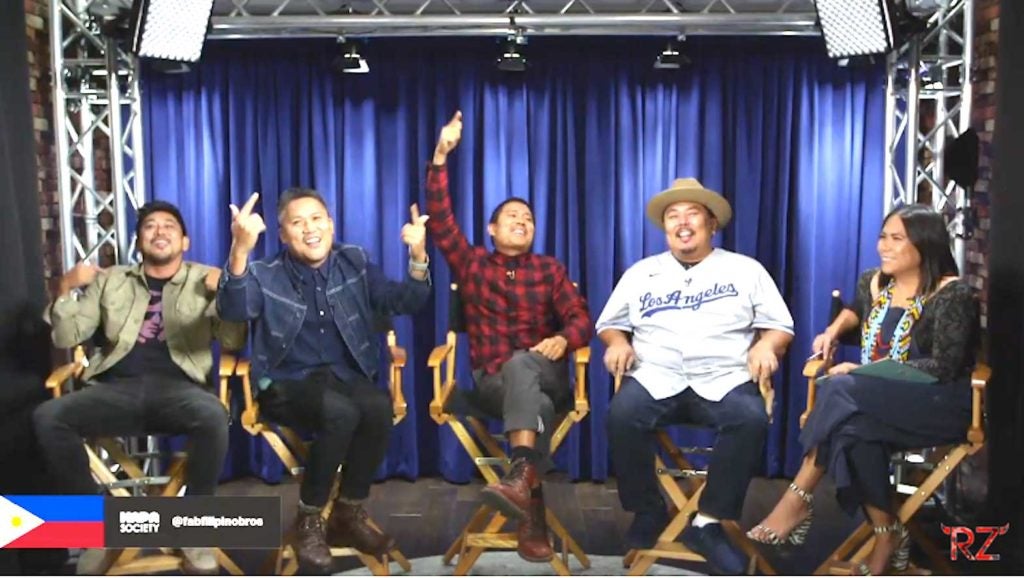 The Basco family — recognized by the City of Los Angeles as the “First Filipino Entertainment Family” — on Thursday during a virtual event celebrated Filipino American History Month by reflecting on the impact they’ve had in Hollywood and offering insights into the entertainment industry. SCREENGRAB/A.Constante

LOS ANGELES – Actor and filmmaker Dante Basco remembered auditioning and drawing blank stares from Hollywood casting directors in the 1980s who asked him what his ethnic background was.

When he first began auditioning for roles, most people in the entertainment industry didn’t know what a Filipino was, he said.

“We’re such a chameleon race, and we’re also a race that’s just naturally mixed with Pacific Islander blood to Latino blood to Southeast Asian blood,” Basco said Thursday during a live streamed virtual event with his siblings to celebrate Filipino American History Month. “That gave us a lot of ways to play roles that were not ethnically Filipino. Whether Latino roles other Asian roles or Hawaiian roles, we’ve played all of them.”

He recalled that the first job he booked in Hollywood was the role of a Native American.

Throughout Thursday’s online event, hosted by Hapa Society, a group aiming to raise awareness of and celebrate mixed ancestry, the Basco family –recognized by the City of Los Angeles as the ‘First Filipino Entertainment Family‘ – reflected on the impact they’ve had in Hollywood and offered their insights in the entertainment industry.

The siblings collectively hold dozens of credits as actors, directors, producers and writers.

Basco is well-known for his portrayal of Rufio in the 1991 film “Hook” and Zuko in the animated series “Avatar: The Last Airbender.” Darion Basco in 2014 played the role of farm worker and labor leader Larry Itliong in “Cesar Chavez.” Arianna Basco recently made her directorial debut with the short film “Glimmer,” which was screened during the Los Angeles Asian Pacific Film Festival in October. Dion Basco is known for his role in the 2018 film “The Head Thieves.” Derek Basco has played several dozen roles in films including “The First Purge” in 2018 and “This Is 40” in 2012.

The siblings all appeared in “The Debut,” the first Filipino American film released theatrically nationwide. The four Basco brothers will reunite on the big screen for Dante Basco’s directorial debut, “The Fabulous Filipino Brothers,” which is narrated by Arianna Basco.

“Filipino creators continue to cement their place in the Entertainment Industry. Although Hollywood is beginning to notice us more, it’s up to us to tell our stories to our community that really matter,” Dante Basco told Inquirer.net in an email. “We are announcing, with Hapa Society, the first US Filipino movie that’s inspired by my family, our heritage, and culture because we all need to be inspired and celebrate being Filipino.”

Viewers who tuned into Thursday’s event were able to watch the trailer for the film – which has yet to be widely released – as well as performances by artists Ruby Ibarra and AJ Rafael, both of whom are featured in the soundtrack of “The Fabulous Filipino Brothers.”

The Bascos, in a panel discussion moderated by Arianna Basco, talked about a number of things and memories in entertainment, including what it’s like to work with family in Hollywood and why there is a need for more Filipino story tellers.

“If we don’t tell our stories, no one will. And they won’t tell it from our voice,” Dion Basco said.

One example is the story of the farmworkers’ movement and the role of Larry Itliong, which Darion Basco reflected on given his portrayal of the Filipino labor leader in “Caesar Chavez.”

“We as Filipinos are very integral in that story, and the story still hasn’t been told properly,” he said. “[Larry], with his compadres, the manongs of that time, were the ones who actually organized, unionized first before Mexicans, and forced Cesar’s hands and all of the Mexicans to come along and strike.”

The siblings also reflected on how being Filipino influences the projects they take on behind the camera.

Dante Basco said he pulled from his own family stories when he wrote “The Fabulous Filipino Brothers” and shared that the brothers in the upcoming film are named after their uncles. The film was filmed in Pittsburg, a city in Northern California where they grew up, which Derek Basco described as a nostalgic experience.

Darion Basco credited the cultural value of family as a big influence that contributes to the camaraderie between every person involved in their projects.

He also credited his family as his support system that has allowed him to remain in the industry as long as he has.

For those looking to do the same, Darion Basco said that in addition to having a support system, it’s important for people to always work on whatever craft they’re pursuing and on themselves as an individual.

“Just try to understand that this life is about everything – it’s not just about success and being happy,” he said. “It’s about the whole journey of good and bad  times, and really being able to understand that because it’s a roller coaster.”