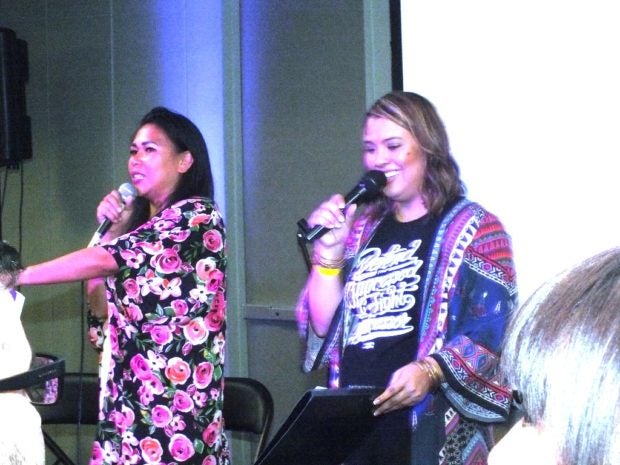 LOS ANGELES – More than a hundred Filipinos gathered for “to foster empowerment in the Filipino community and advocate for women’s rights” culminating with “Pinay stories that share the experiences of our kababayans.”

The gathering at the community meeting space of the Asian Pacific American law offices of Advancing Justice in downtown Los Angeles early September was hosted by the Malaya Movement.

Among the luminaries in attendance were Ruby Ibarra, a rapper and spoken word artist from the San Francisco Bay Area, Arianna Lady Basco, recently recognized by the City of Los Angeles and the State of California for her and her brothers’ contribution to the arts as “The First Filipino Entertainment Family”, and Minerva Vier, originally from Cebu, Philippines, a Filipina American actor-writer-producer who was also one of the stars in the locally produced play “Dogeaters.” San Francisco Bay area rapper and recording artist, Ruby Ibarra (right) has the audience up on its feet and rapping along. INQUIRER/Florante Ibanez

Giselle “G” Tongi, event organize and emcee, has been part of the Filipino media landscape for over two decades as an actor, host, writer, and producer, and was ormer host of the TV show “Kababayan Today.”

She remains very actively involved in the Filipino community and sits on the board of Likhaan, a reproductive health NGO in the Philippines that provides access to RH for Filipino families in need. Tongi will be attending the upcoming International People’s Tribunal (IPT) in Brussels, to expose the human rights violations under the Duterte administration.

“In the ‘70s there was Martial Law, in 2018 there’s the Duterte administration,” she said. “Now, we have to organize and come together to educate the people about what’s happening in the Philippines. There’s this misconception that because we are Filipinos in America, that we shouldn’t care or that we are not affected; but that’s not true because the killings in the Philippines from the drug war are happening on a daily basis, and the numbers are 23,000 currently, that is more than under Marcos. Why is this happening in 2018?” Funds raised from this event will help with her trip expenses. Attendees at the Malaya Movement event to educate and organize against the Duterte government’s authoritarianism. INQUIRER/Florante Ibanez

Providing the music was DJ Menchie Caliboso, a musician and producer for Bootleg Orchestra, an electronica/soul group from Long Beach, California. In the past, Menchie has shared the stage with De La Soul, Gallant, Sylvan Esso, and more. Recently, she produced “Carry on the Fight,” a song about women human rights defenders featured on the “Rock the Mic for Human Rights in the Philippines” album compilation sponsored by the International Coalition for Human Rights in the Philippines-US Chapter (ICHRP-US).

Besides speeches and songs, a political skit depicted the recent arrests of journalists in a labor protest by striking NutriAsia workers. Eric Tandoc and Hiyasmin Saturay, two of those arrested, were present at the event and stated they were detained because of their documentation of the brutality of the strike breakers and their destruction of the barricades.

The Malaya Movement states that it stands in solidarity with those in the Philippines “who are standing up against Duterte’s looming dictatorship.” It holds corporations such as NutriAsia accountable to its export markets, and the U.S. government for the millions of taxpayer dollars it gives to aid Duterte’s military and policing efforts.