3 rays of hope after a terrible decade for Filipinos

3 rays of hope after a terrible decade for Filipinos 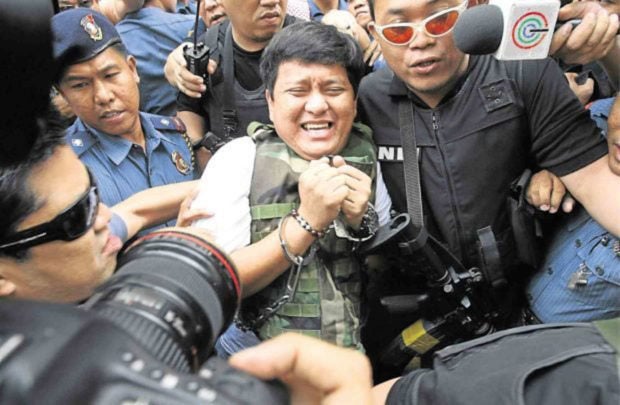 This photo, taken on Dec. 18, 2009, shows Andal Ampatuan Jr., a principal accused in the 2009 massacre of 58 people in Maguindanao province, being arrested. INQUIRER FILE

The end of the 2000s saw a horrifying massacre of 58 people in Mindanao. Recently, after a decade, a courageous judge found many of the criminals guilty of the murders.

But the first step toward justice took a decade. (And it’s not over since the Ampatuans are expected to appeal the decision all the way to the Supreme Court and that could take who knows how long.)

It took more than10 years for some form of justice to be achieved. In a way, this underscored what had been a terrible time for Filipinos, a decade of arrogance, brutality and mass murder.

It began with the final months of a president accused of corruption and cheating. Gloria Arroyo will be remembered for being the only Philippine president to be caught on tape in what appeared to be a brazen attempt to rig an election.

Noynoy Aquino was supposed to be an entirely different leader. He was going to usher in a new era where leaders are responsive to the people’s needs.

But the first crisis of his presidency set the tone for his leadership style. The Luneta hostage crisis, which began when a disgruntled police officer took over a tour bus, led to the death of eight tourists. It was also known as a badly mismanaged police operation. It also led to a portrait of Aquino as a leader lacking in empathy, a president whose blind loyalty to his friends sometimes led to disaster.

For the latter half of the 2010s suddenly morphed into something worse, more horrifying and despicable. It was defined by a leader with a mass following who inspired mass murder, who denigrates women and the poor, who openly encourages soldiers to rape and kill.

A leader with no respect for Filipinos.

By now, we’ve become accustomed to the slime that routinely comes out of Duterte’s month.

But there are rays of hope, people and trends Filipinos can be proud of and build on at the dawn of the 2020s. I’m borrowing the phrase from my friend Sheila Coronel who wrote of how the Ampatuan verdict “offers a ray of hope” for democracy in the Philippines.

Here are three of them:

It’s hardly an ideal time to be an activist in the Philippines, not when advocating for human rights or even due process would make one a target.

But there are still people fighting back, especially young people.

Some of them paid a high price for getting involved. Take the case of Brandon Lee, the young Chinese American from San Francisco, who moved to the Philippines in 2010 to fight for human rights in the Cordilleras. Amid intensifying violence against human rights activists under Duterte, assassins tried to kill him.

Fortunately, he survived. What one of his Filipino American friends in San Francisco said about him is worth highlighting. “Even though he did not have roots in the community, Brandon saw the humanity of all people,” Melissa Reyes said. “It didn’t matter that he wasn’t from there.”

Leaders under fire who are not giving up

Senator Leila De Lima has been imprisoned for more than 1,000 days, the most prominent victim of political persecution under Duterte. Her plight has led the United States to ban Filipino leaders responsible for her incarceration.

But she has kept on fighting. And so have many others, even if meant coming face to face with violence and death.

Two years ago, Marcelito Paez, fondly known as Father Tito, who fought for human rights during the Marcos regime and continued his work during the bloody reign of Duterte, was assassinated in Nueva Ecija.

The poet-activist Mila Aguilar, who was imprisoned during the Marcos dictatorship, had this powerful reminder in the wake of Father Tito’s death: “His death will not be in vain. We shall make sure of that. .. For every martyr they kill, ten more arise. I believed that then, and I believe it now.”

Journalists did their job despite the risks

My last column about “Nightcrawlers” talked about this. One of the films nominated for an Oscar this year honors the courage of Filipino journalists who have been covering, documenting, exposing the slaughter under Duterte.

The world has also honored other leading Filipino journalists — including Time Person of the Year Maria Ress and Pulitzer Prize winner Manny Mogato — who have kept on reporting on the bloodbath in the face of insults and threats from Duterte and his supporters.

Amid the carnage and the abuse under Duterte, photojournalist Raffy Lerma’s question in Nightcrawlers resonates among many Filipino journalists: “The majority of people still support the drug war, but after the six years President Duterte, you just have to ask yourself what did you do?”