A coming-out party for Mindanao fashion In Manhattan The models with director Rain Ramas at center.RJ ENSALADA

Models wearing designs inspired by the Blaan, Tboli and Maguindanao tribes from Southern Mindanao enlivened the Philippine Center’s Kalayaan Hall as they did the runway walk. The show featured the “neo-ethnic” designs of Feliciano Ador, described as a fusion of tribal crafts and modem fashion silhouettes.

Ador was absent but delivered a video message inviting Filipinos in New York to view contemporary- style Mindanao fashion. A member of the Mandaya ethnic group — concentrated in the provinces of Davao and Surigao — it is Ador’s hope that bringing the program internationally will open the possibility of enhancing the livelihood of the tribal communities. 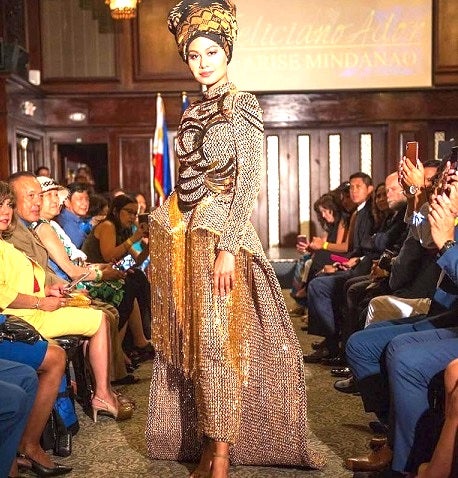 There were trinkets and accessories, crafted by indigenous artisans, to match the clothes. Everything revolved around the power of color, Mindanao being a region known for its rainbow-colored boats, weaves, baskets, and the romance they evoke.

The show went on under the direction of program director Rain Ramas.

“Opportunities like this don’t really happen that much,” said Ramas. “Our commitment is to really serve the community. We hope that we’ll be able to promote these crafts to the world. To teach people that Mindanao is not just a war zone as the media would say often. Mindanao is a hub of arts and creativity, crafts, culture.” 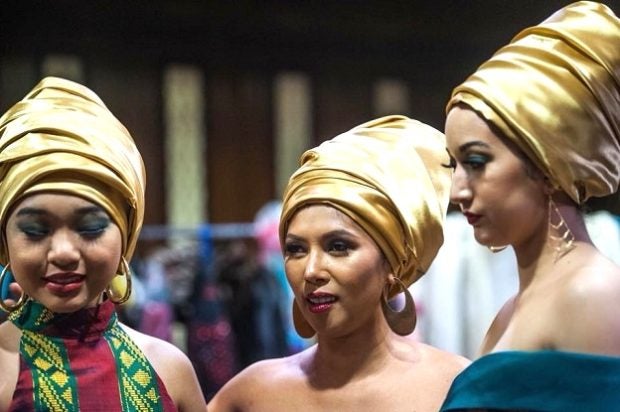 The primary purpose of Arise Mindanao is to promote the crafts and fabrics of the tribal groups in an international fashion setting, he added. Hence, the choice of New York City, known for being the fashion capital of the world.

“The world has become a smaller place as people reach out to all corners of the globe in search of products that are unique, beautiful and original”, said Consul Arman Talbo in his welcome remarks.

Miss Universe 2010 runner up Venus Raj was the stellar attraction. She wore the finale outfit, a heavily embroidered gold ensemble with a matching gold head wrap and a flowing train.

“It’s my first time in New York, I’m excited. The designer is a friend. I’m really privileged to wear one of the creations of Jun Ador. He is really good,” said Raj.

Beads were handcrafted into Ador’s designs, a trademark of sorts by the designer.

Filipino model Fritz Baum said it was his first time to hit the ramp in NYC. “It’s actually amazing, the crowd is very heartwarming. Everybody is so accommodating. I’m hoping they will show this in other places,” he said.

“It’s a great experience being part of the show,” said Villamayor who was born in Tanauan City, Batangas but is now a resident of East Meadow, N.Y.

There were gift bags on for the guests Kalayaan Hall courtesy of the show’s co-producer Glossy Skinnovations headed by Mita Quiogue.

The show was not without its “bumps in the road.” To begin with, it started late. Filipino Time became a cultural justification. There were not enough seats for the guests although they came ahead of show time. There were no programs available to guide guests on the sequence of the program.

Overall, organizers were hopeful the show was able to celebrate the uniqueness of Mindanao fashion and crafts, with proceeds helping to fund the region’s underdeveloped water systems, education, and to promote indigenous livelihood.