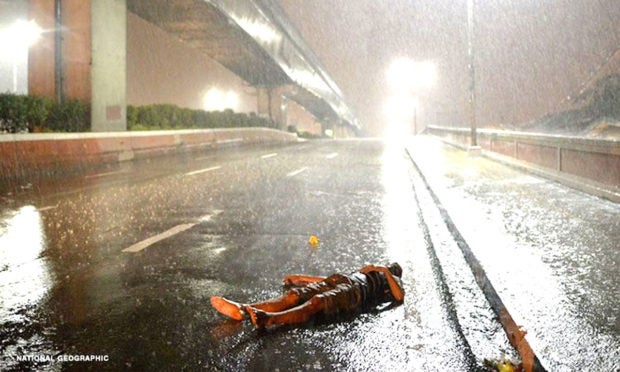 A shot from NatGeo’s “The Nightcrawlers,” a documentary on President Duterte’s war on drugs.

In journalism, the late night shift is usually given to new reporters or photojournalists, the rookies. I did my share of late nights when you don’t really do much, except to be ready in case something breaks.

But in the Philippines under Duterte, the graveyard shift turned into an important beat — for a tragic, horrifying reason.

That was when the killings he inspired are taking place. That’s when Filipinos in poor neighborhoods become targets of police and vigilantes.

And that’s when some of the most courageous Filipino journalists are playing a critically important role: reporting, documenting, exposing the Duterte Killings.

Their story is explored “The Nightcrawlers,” a documentary produced by National Geographic, which has been nominated at the upcoming Academy Awards.

I highly recommend this film which you can watch on the National Geographic site  or on YouTube.

“I have to fight becoming numb,” Lerma says at a funeral of one of the victims of the Duterte Killings. “That’s why I go to wakes, to funerals to know more about these victims.”

The victim at the funeral was only 15.

“Every day you cover these scenes,  it chips away at your humanity but it’s more important to cover these killings than to do nothing at all,” Lerma says. “In the Philippines, we have a president who is instigating that it’s okay to kill. We can’t just be passive about it. We have to actively challenge what’s happening. Because we know it’s wrong. We know it’s wrong.”

“The Nightcrawlers” also turns the spotlight on a group of hitmen — their faces are covered in the interviews — who say they coordinate their operations with the police.

These assassins say they’re helping get rid of drug dealers and drug addicts. Now that’s also hard work, they say, which is why they need a boost before each hit to make the job easier — by smoking meth.

“When I smoke meth I feel nothing when I kill,” one assassin says as he smokes shabu. “I’m high so I don’t think much about what I’m doing. It makes you bolder so it’s easier to kill.”

Of course, Duterte has made it crystal clear that he doesn’t care much about killings he inspired — or the journalists who have done an incredible job exposing the bloodbath.

The slaughter continues on and Lerma asks an important question, not just for journalists but for every Filipino in the time of the Duterte Killings: “The majority of people still support the drug war, but after the six years President Duterte, you just have to ask yourself what did you do?”