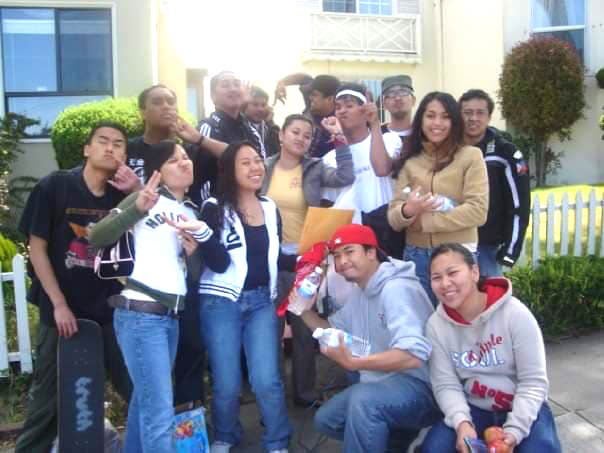 Brandon (in front in the red cap) with his Filipino friends at San Francisco State University, including Carlo Montemayor (on the left with the skateboard). CONTRIBUTED

The assassination attempt on human rights advocate Brandon Lee underscores how the violence Duterte has inspired is now also aimed at foreigner nationals, including Americans.

But it’s more than that.

Lee, the 37-year-old activist who was shot outside his home in Ifugao, isn’t just American. He’s Chinese. Not Chinoy or Chinese Filipino, but Chinese American who grew up in San Francisco, had no direct familial roots in the Philippines, but who chose to give up his life in the Bay Area to embrace the cause of poor and oppressed Filipinos in the Cordilleras.

His journey of courage and sacrifice is striking in any context.

But it is worth highlighting in a time of intensifying Filipino resentment toward China and the Chinese, animosity rooted in a growing list of offenses from Beijing’s alarmingly arrogant posture in the West Philippine Sea, which Duterte has shamelessly defended, to the sudden arrival of thousands of mainland Chinese in the country.

There are times when it appears that the antagonism could spin out of control into a sweeping, irrational and dangerous hatred of anything or anyone Chinese.

Brandon Lee’s story hopefully will lead us to rethink the way we frame the troubling developments involving China and the Chinese, and veer away from the scary rhetoric embraced even by some prominent writers and intellectuals.

For Brandon’s odyssey is a moving reminder of the power of solidarity, of a young person’s ability to see beyond his world, and commit to a cause greater than himself.

“Very few of us would have made the decision he made to move to one of the most dangerous places in the world for journalists and environmentalists,” Carlo Montemayor, a Filipino American from San Francisco and Brandon’s friend, told me.

Together, they joined the League of Filipino Students chapter at SF State. The activist organization actually started in the Philippines in the 1970s at the height of the fight against the Marcos dictatorship. The US chapter was started by my friend Francis Calpotura, a respected activist and organizer in the Bay Area. I have many friends who were once members and leaders of the organization.

I’ve been critical of the LFS in the past, particularly in connection with recent attempts to silence the activist and writer Susan Quimpo. That’s another story which I discussed in another column.

Brandon joined trips to the Philippines called “exposure tours” which gave him a chance to see up-close the poverty and deprivation endured by most Filipinos. The tour entailed visiting and living in marginalized communities in rural and urban areas for a number of weeks.

It was not always easy for young people who grew up in California, like Melissa Reyes. She said it was Brandon who helped her adjust during a 2008 trip when she lived with a family in a poor fishing community.

“I was having a hard time culturally,” she told me. “I had a hard time  communicating with my family. I actually cried about it.” She reached a point where she said, “I don’t know if I can do this.”

Brandon, she said, “helped me regain my bearing.”

“He would always remind me to be patient because it was a different culture we were integrating in,” she said. “He calmed me down. He was very patient.”

It also was clear that Brandon was welcomed in the communities they visited. “They were really drawn to him,” Melissa said. Brandon “had this love for the Philippines,” she added.

In fact, his trips to the Philippines had a profound effect on Brandon, Carlo said.

“He got to see for himself, not from a book, not from watching television, and got to witness firsthand what was happening on the ground in these communities. That opened his eyes. That was probably the biggest deciding factor for him. ‘There’s a lot of messed up stuff going on and I see it with my own eyes.’”

Brandon decided to do something about it.

In 2010, he moved to the Philippines. He eventually settled in Ifugao province, where he became deeply involved with the Cordillera Human Rights Alliance and the Ifugao Peasant Movement.

Brandon moved to the Philippines at the start of the presidency of Noynoy Aquino, when human rights particularly in the provinces were a concern. He continued doing human rights work when the abuses and the violence became even more pronounced under Duterte.

By the time Duterte came to power, Brandon was settled in Ifugao with his own family, including a  daughter.

Melissa had visited him and his new family in Ifugao in 2014. This was shortly after the activist William Bugatti, who was Brandon’s friend, was assassinated.

“That’s a name I never forgot,” Melissa said. That’s because Brandon kept talking about his fellow activist and his death. “He wanted me and others to remember that name. There was urgency in his voice.”

Brandon’s safety was always a concern. It  became an even bigger worry when posters accusing him of being an “enemy of the state” began circulating in Ifugao and on social media.

News of the assassination attempt stunned his friends, Carlo said. “A lot of us till now have had a hard time eating and sleeping.”

Brandon is still in critical condition.  “He helped inform a lot of my own values,” Melissa said. “We’re praying for him.”

Praying for a schoolmate and friend who developed such a deep commitment to the Filipino community, to a people and country he came to know and embrace as a young college student.

“Even though he did not have roots in the community, Brandon saw the humanity of all people. It didn’t matter that he wasn’t from there.”

Brandon Lee’s friends have launched a fundraising campaign for him and his family.