A book under fire -- why young Fil-Ams should read it

A book under fire — why young Fil-Ams should read it

Subversive Lives is not an easy read. It’s a tale of courage and youthful idealism, but also of torture, imprisonment and death.

Here’s a quick overview: Ishmael and Esperanza Quimpo had 10 children. Seven of them joined the underground resistance to the fascist dictator Marcos; five were imprisoned; four tortured. One was murdered by the military; another abducted and is presumed dead; another forced to live in exile in Europe.

When it was first published by Anvil in 2012, I wrote of how young Filipinos could learn so much from this book, especially those eager to make a difference by joining movements for change.

The world has changed dramatically since then.

The dictator that the Quimpo siblings opposed three decades ago has been declared a hero by another fascist president who has instigated a bloodbath that has killed more than 7,000 people, mostly poor Filipinos. And this leader has found an ally in Washington amid a scary wave of racist, anti-immigrant hysteria.

Subversive Lives, which just got republished in the United States by Ohio University Press, has become even more relevant for young Filipinos and Filipino Americans today.

It’s not surprising that the book would be dismissed and rejected by supporters of the late dictator, including many from the military, who imprisoned and tortured some of the Quimpo siblings.

But here’s the sad twist with the launch of the book’s international edition: Subversive Lives is under fire from a movement that claims to be fighting for social change. 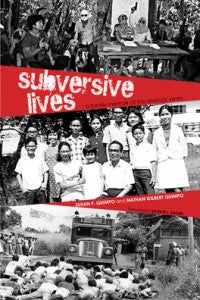 It is the same movement the Quimpos once were part of and even helped build. I guess the attacks are not surprising.

That’s because Subversive Lives offers a critical and nuanced portrait of the underground left, as a movement of brilliant, courageous and committed young Filipinos willing to sacrifice everything in the fight to build a more equitable society, but one that’s led by paranoid leaders blinded by dogma and with shocking capacity for ruthless violence.

The latter tendency is evident in one U.S.-based organization’s statement denouncing the book: “During this particular political climate when Donald Trump’s neo-fascism is transforming US imperialism globally and in the US, and when Rodrigo Duterte’s state violence reigns with impunity, members of League of Filipino Students at San Francisco State University, insist that subversion cannot take the form of self-aggrandizing via book tours and forums to disparage activists trying to build movements for peace and justice.”

The low-budget US tour to promote the book became even more challenging in the San Francisco Bay Area after one event got canceled and others had to be scaled back amid lies spread about Susan Quimpo, one of the book’s authors.

Susan has been accused of being a red-baiter, whose main goal in the book and the tour is to wage a witch-hunt that would endanger the lives of activists. She’s essentially being compared to the hate groups that have sprung up with the rise of Donald Trump.

It is a ridiculous, unfair and enraging accusation.

Her critics are attacking an activist who has been in the forefront of the campaign to educate young Filipinos about the Marcos years.

They’re attacking an activist who has spent the last few years of her life organizing educators and students against the Marcos comeback.

And here’s another bizarre twist: Susan Quimpo is being criticized by a movement that endorsed Duterte and his fascist policies and even declared that the decision to honor Marcos was no big deal.

The most unfortunate outcome of the attacks against Subversive Lives in the U.S. is this: young Filipino Americans who bought into the lies about the book are missing out on an opportunity to read a compelling and important story.

Some of them in the San Francisco Bay Area have missed opportunities to take part in engaging discussions about what happened to us during the Marcos years.

Her critics paint a picture of Subversive Lives and Susan’s tour as nothing more than polemical attacks against the underground left.

This is totally wrong. I was at Susan’s presentation in Daly City where she spoke mainly of her family’s story and of the growing concerns about the situation back home.

Here’s another important contribution of Subversive Lives. The fight against Marcos is still typically told through the stories of prominent figures and families like the Aquinos and the Marcoses.

The book offers another view. Subversive Lives helps us understand the struggle against tyranny through the journey of one Filipino family, which, like many families of that era, faced a tough choice: keep silent and just obey in a time of repression, or fight back.

They chose to fight back and paid the price for it.

In one of the moving scenes in the book, Nathan Quimpo recalls visiting his dying father. Nathan was then a political prisoner and was in military custody when he last saw his father:

“Even in his dying days Dad was not about to show his emotions,” he writes. “Not even when he and Mom had worked hard through most of their lives to send their children to the best of schools, wanting to get us all through college, hoping that we would all become successful doctors, lawyers, engineers and bankers one day. And now he was seeing us in hiding, on the run, or behind barbed wire, either fugitives or prisoners.

“What could I say to my dying, unhappy father about his shattered dreams? Sorry Dad we did not live up to your expectations? Sorry, it’s not your fault, but it’s not our fault either? That we were all victims of circumstances, or victims of an unjust social order and of a dictatorship?”

I have a message for the young Filipino Americans of the the League of Filipino students at San Francisco State University:

You joined this organization because you care about what’s going on in the Philippines and the United States. That’s great news and I support you, and I’m sure many of my fellow former activists living in the Bay Area support you.

However, I hope you remain open to other viewpoints, including from those of us who were once young activists like you.

Here’s my proposal: I volunteer to buy two copies of Subversive Lives for your organization. If you need more, I am willing to help you raise funds for more books. And if you are willing, we could then have conversations not just about the book, but also about what we endured during the Marcos years.

I have one main reason for wanting to do this, which I also mentioned in my 2012 review of Subversive Lives.

The story of the Quimpos, and the stories of many other people who joined the fight against dictatorship, including those who have encouraged you to not read and instead denounce Subversive Lives — these stories must be told and preserved so young Filipinos can learn from them.

I am always willing and eager to be educated and even be proven wrong. And I hope you are too.

In our journey as Filipinos, many other young people also felt a burning desire to change the way things are in Philippine society and in the United States. And there are many things we can learn from what they went through.

This is important now in yet another time of fear and repression and resistance in two countries we call home.

You can order a copy of Subversive Lives through the Ohio University Press website.