LeBron James delivered his second straight triple-double as the Los Angeles Lakers won their fifth game in a row for the first time in over a year with a 103-96 victory against the San Antonio Spurs.

James finished with 21 points, 11 rebounds and 13 assists for the Lakers, who have missed the playoffs six seasons in a row and went the entire 2018-19 season without winning five consecutive games.

“I’m playing injury-free.
I’m not injured.
My quick-twitch is back.
My speed is back, my strength is back,” James said.

The Spurs kept it close in the fourth thanks to Dejounte Murray’s 16 consecutive San Antonio points.
He made a layup with just over four minutes to play to tie the contest 90-90.
Los Angeles then went on a 9-2 to hold off the Spurs down the stretch and get the victory.

James is also the first Lakers player with 30 points, 15 assists and 10 rebounds in a game since Magic Johnson in 1990. pic.twitter.com/TIrJ5Kibzd

“It was about us and how we could execute on the offensive end which we did,” James said.
“We held a great offensive team to 40 percent shooting and under 100 points.”

Anthony Davis finished with 25 points and 11 rebounds for the Lakers, who are trying to rebuild their team around James, who also had a triple-double two nights earlier against Dallas.

James said being healthy makes all the difference in the world.

“Playing with a torn groin last year — even when I came back it was still partially torn — it was difficult to be able to move and shift like I’m capable of doing that defensively,” James said.
“For me, I just take the challenge.
I love being challenged.

“I put a lot of hard work into my offseason by getting my quick twitch, getting my bounce back, getting my speed back, my reaction time back.
My mind has always been there.”

Avery Bradley added 16 points while Kentavious Caldwell-Pope and Dwight Howard had 14 points each.
Howard also grabbed a game-high 13 rebounds for the Lakers, who improved to 5-1 on the season. 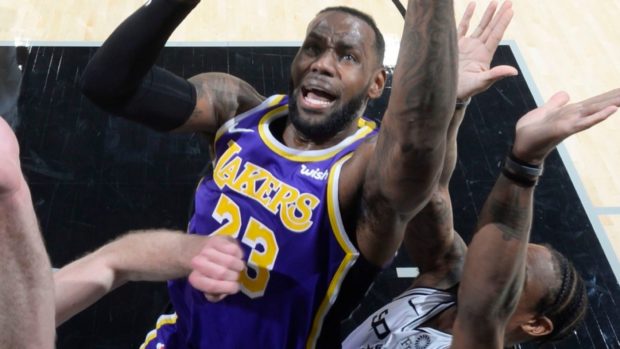 Lakers head coach Frank Vogel was especially pleased with the play of journeyman reserve player Howard, who is with his fifth team in the last five seasons.

The former first overall draft pick by Orlando in 2004 is past his prime as a starter in the league and appears to be more comfortable coming off the bench.

“He’s bought into his role on this team… he is dominating on the defensive end,” Vogel said of the 33-year-old Howard.

Murray produced 18 points and 11 rebounds for the Spurs, who lost at home for the first time in four games this season.

Rudy Gay and Derrick White added 16 and 12 points, respectively, off the bench, with DeMar DeRozan scoring 14 points and Bryn Forbes hitting for 12 for San Antonio.

Kyle Kuzma’s 38-foot buzzer-beater allowed the Lakers to finish the second quarter with a 10-0 run and take a 56-43 lead at halftime.

Gay’s jump shot from near half-court at the end of the third quarter gave the Lakers a 77-72 lead heading into the fourth quarter.

Doncic, of Slovenia, finished with 29 points, 14 rebounds and 15 assists for the Mavericks, who trailed 73-69 with 4:52 remaining in the third quarter before dominating the rest of the game.

The 20-year old Doncic is the youngest player in NBA history to have back to back 25-point triple-doubles.
It is the 11th triple-double of his burgeoning career.

Doncic shot nine-for-17 overall and five-for-10 from three-point range to reach his 29 points.
His 14 rebounds were the third most of his career and his 15 assists tied a career-best.

He also had 15 assists in a triple-double performance against the Lakers on Friday night, a game in which he suffered a head injury after being blindsided by the Lakers‘ Howard.

Latvia’s Kristaps Porzingis chipped in with 18 points, Jalen Brunson 14, Seth Curry 13, Boban Marjanovic, of Serbia, and Tim Hardaway 12 apiece, and Dorian Finney-Smith 10 for the Mavericks, who have alternated wins and losses in their last five games.