Two-time NBA Most Valuable Player had a CT scan on his broken left hand on Thursday and the Golden State Warriors will consult specialists to determine how long he’ll be sidelined.

The Warriors’ superstar guard was injured Wednesday when he was fouled by Phoenix center Aron Baynes as he drove to the basket in a 121-110 loss to the Suns.

“Stephen Curry has a broken hand,” the Warriors confirmed in a tweet on Wednesday night.

The San Jose Mercury News reported Thursday that the Warriors expected to have a timetable for Curry’s return — depending on whether he needs surgery or not — on Friday.

Even before Curry was injured the Warriors — winners of three titles in the past five seasons — were struggling to find their form.

Former MVP Kevin Durant departed as a free agent at the end of last season and Klay Thompson remains sidelined by injury.

With Kevin Durant departed as a free agent while Klay Thompson will miss most of the season with a torn knee ligament.
Center Kevon Looney is also sidelined.

“Obviously, it’s been a tough start for us on many levels, so we’re just trying to find our footing,” Warriors coach Steve Kerr said after Golden State fell to 1-3 on Wednesday.
“This puts us in a tough spot, so we’ll assess it and go from there.” 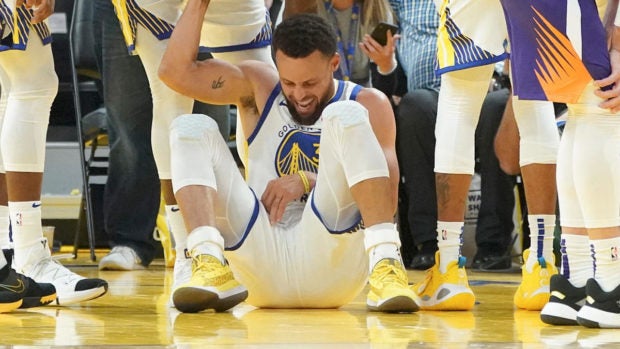