On October 29, 1969, professor Leonard Kleinrock and a team at the University of California at Los Angeles got a computer to “talk” to a machine in what is now known as Silicon Valley.

The event gave birth to a network that later became known as the internet — hailed at first as a boon to equality and enlightenment, but with a dark side that has emerged as well.

As UCLA marks the anniversary, Kleinrock is opening a new lab devoted to all things related to the internet — particularly mitigating some of its unintended consequences on the internet which is now used by some four billion people worldwide.

October 29 2019 marks 50 years to the day since Leonard Kleinrock‘s team sent the first message over the *Arpanet*, transforming his mathematical theory of packet switching into what would become the modern Internet.

“To some point, it democratizes everyone,” Kleinrock told AFP.

“But it is also a perfect formula for the dark side, as we have learned.”

So much is shouted online that moderate voices are drowned out and extreme viewpoints are amplified, spewing hate, misinformation, and abuse, he contended.

“As engineers, we were not thinking in terms of nasty behavior,” said Kleinrock, 85.

The new Connection Lab will welcome research on topics including machine learning, social networking, blockchain and the internet of things, with an eye toward thwarting online evils.

Kleinrock expressed particular interest in using blockchain technology to attach reputations to people or things online to provide a gauge of who or what to trust. 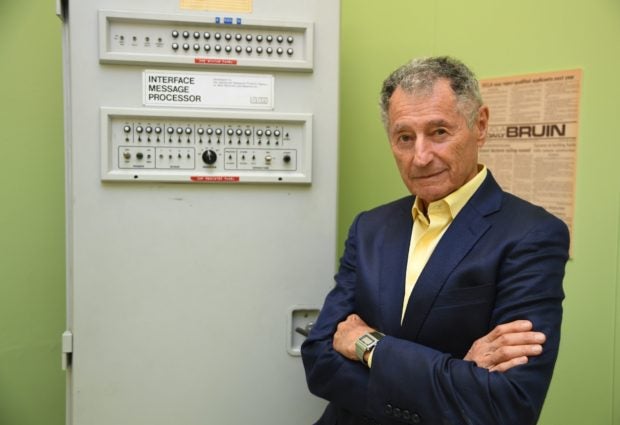 For example, someone reading an online restaurant review would be able to see how reliable that author’s posts have been.

“It is a network of reputation that is constantly up to date,” Kleinrock said.

“The challenge is how to do that ethically and responsibly; anonymity is a two-edged sword, of course.”

He blamed many of the internet’s ills on businesses hawking things that are outdated or unneeded, violating privacy to increase profit.

“We were not the social scientists that we should have been,” Kleinrock said of the internet’s early days.

He regretted a lack of foresight to build into the very foundation of the internet tools for better authenticating users and data files.

“It wouldn’t have avoided the dark side, but it would have ameliorated it,” he said.

He remained optimistic about the internet’s woes being solved with encryption, blockchain or other innovations.

“I do still worry. I think everyone is feeling the impact of this very dark side of the internet that has bubbled up,” Kleinrock said.

“I still feel that the benefits are far more significant; I wouldn’t turn off the internet if I could.” In the early days, US telecom colossus AT&T ran the lines connecting the computers for ARPANET, a project backed with money from a research arm of the US military.

A key to getting computers to exchange data was breaking digitized information into packets fired between machines with no wasting of time, according to Kleinrock.

A grad student began typing “LOG” to log into the distant computer, which crashed after getting the “O.”

“So, the first message was ‘Lo’ as in ‘Lo and behold,'” Kleinrock recounted. “We couldn’t have a better, more succinct first message.”

Kleinrock’s team logged in on the second try, sending digital data packets between computers on the ARPANET, so named because funding came from the US Advanced Research Projects Agency (ARPA) established in 1958.

Credit for creating the internet is a topic of debate since there are a series of key moments in its evolution including the arrival of protocols for how data is routed and the creation of the World Wide Web system of online pages.

The name “internet” is a shortening of the “internetworking” allowed when one computer network could collaborate with another, according to Marc Weber, curatorial director at the Computer History Museum in Silicon Valley.

“The billion-dollar question is, what kind of beast has the internet become?” Weber asked.

“It has become the default main way for humans to communicate, and that is not small.”

While marking its 50th anniversary, the internet as we know it is a “rowdy teenager” in the eyes of Internet Society chief technology officer Olaf Kolkman.

“The internet has done more good than harm,” Kolkman said.

“The biggest challenge we have in front of us is that while we cope with big problems enabled by global connectivity that we don’t throw the baby out with the bathwater.”