Amazon on Thursday reported quarterly profits shy of Wall Street forecasts as it poured money into speeding up delivery time to just a day.

Revenue climbed 24 percent to $70 billion in the quarter to September 30, compared to the $56.6 billion in sales logged in the same period a year earlier, according to the Seattle-based company.

Check out these amazing box costumes Prime members are making this Halloween! Tag us if you’re making a #boxtume. 😁 pic.twitter.com/EktuVXNWrf

Amazon shares were down nearly seven percent in after-market trades that followed the release of the earnings figures.

The cost of sales at Amazon leaped about 33 percent, eating into net income, according to the earnings report.

Amazon has been pushing to deliver packages more quickly, promising a wide selection of items to arrive within a day of being ordered by members of its Prime subscription service.

“We are ramping up to make our 25th holiday season the best ever for Prime customers — with millions of products available for free one-day delivery,” said Amazon chief executive Jeff Bezos in the earnings release.

“Customers love the transition of Prime from two days to one day — they’ve already ordered billions of items with free one-day delivery this year.

It’s a big investment, and it’s the right long-term decision for customers.” 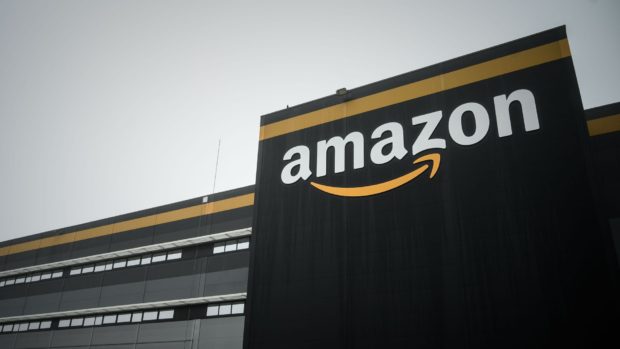 Amazon added nearly 100,000 workers in the quarter, most of them to bolster fulfillment centers and delivery teams, according to chief financial officer Brian Olsavsky.

“We are really pleased with customer reaction to one-day delivery,” Olsavsky said.

“We have seen Prime members spend more, so they must see it as a real help to them in their daily lives.”

Amazon, one of the world’s most valuable companies, has expanded from its origins in e-commerce to cloud services, streaming media, artificial intelligence, and brick-and-mortar grocery stores, with its own lineup of consumer electronics.

Analyst Andrew Lipsman at the research firm eMarketer called the quarterly results “a very mixed bag for Amazon with a couple shining bright spots but also some clouds looming in the cloud business.”

Lipsman said the cloud computing unit AWS is seeing “softening in growth rates” which he said, “will weigh on the company’s profits if they can’t reverse the trend.”

The analyst said Amazon’s advertising and e-commerce operations “look very strong, as investments in next-day shipping, though eating into the bottom line in the near term, are paying fast dividends on the top line.” AWS accounted for nearly $9 billion in revenue, with growth in the cloud-computing unit up 35 percent from a year ago.

But, Amazon is “investing a lot more this year” in AWS, particularly in sales and marketing as well as infrastructure while chasing what it sees as a “large opportunity,” according to Olsavsky.

In a product launch, last month in Seattle, Washington, Alexa was the star as Amazon sought to widen the reach of its digital assistant powered by artificial intelligence amid a battle with rivals from Google, Apple, Microsoft, and others.

Along with beefing up the Echo and Ring lines, Amazon introduced earbuds it touted as providing the first wearable, hands-free Alexa experience on the go.