The father of a 24-year-old man injured in a shooting at a Northern California Halloween party where four people died says his son is in a coma.

Romond Reynolds said his son, Armani, was wounded during the shooting Thursday night at an Airbnb home in the San Francisco Bay Area community of Orinda.

He said his son went with friends after apparently learning of the party on the internet.
ADVERTISEMENT

Police say four people were killed and at least three injured at the party that attracted more than 100 people.

Authorities did not have an exact count of the injured because some were taken to hospitals in private vehicles rather than ambulances.

Our 20 trending destinations for 2020* have arrived.

Ranging from post-industrial culture hubs to emerging sustainable destinations, this year’s list is full of hidden gems that'll help you get ahead of your travel plans.

*based on year-over-year growth in bookings pic.twitter.com/DFm4UF1bAT

Reynolds says someone drove his son to the hospital and he received a call at about 11 p.m., roughly 15 minutes after police were summoned to the home.

No suspects have been arrested.

The woman who rented a San Francisco Bay Area house where four people were fatally shot during a Halloween party told the homeowner she and her family were fleeing wildfires.

A person with knowledge of the business transaction told The Associated Press the owner of the Airbnb rental in the city of Orinda wanted to make sure the woman seeking to rent the property on Halloween night wasn’t planning a party.

The person says the renter told the homeowner that her family members had asthma and needed a place with fresh air.

The person was not authorized to publicly disclose the information and spoke only on condition of anonymity.

A giant wildfire burning in Sonoma County about 60 miles (97 kilometers) north of Orinda earlier in the week forced tens of thousands of residents to evacuate.

At least three people at the Orinda house were injured.

Airbnb hosts are opening up their homes to those impacted by the wildfires in the Los Angeles area. Find temporary accommodations here: https://t.co/X4nGkTNjDr https://t.co/LIaFFSv8HI

An Airbnb spokesman says the owner of a San Francisco Bay Area house where four people were fatally shot during a Halloween party had specifically banned such parties in the rental listing.

Authorities said Friday that four people were killed and at least three were wounded, one critically, in the shooting at the home in the city of Orinda.

The homeowner had been told the renter would use the house for a family reunion of 12 people but about 100 showed up to the party.

Airbnb spokesman Ben Breit says in an email that the home’s Airbnb ad includes prohibitions on smoking, marijuana use, weapons, and parties.

The listing also says quiet hours must be observed between 10 p.m. and 8 a.m. because neighboring homes are close by.

The shooting was reported shortly before 11 p.m. Thursday as neighbors complained of excessive noise before hearing gunfire.

Breit says Airbnb has banned the renter from its platform and the home has been removed as a listing.

5️⃣ Meet Tynthia, a community volunteer based in Arizona.

"It's 2019—I feel like we all have a voice and the tools to make ourselves heard around the world. Why not say something that helps others help themselves and the world we live in for generations to come?" pic.twitter.com/wHHFIZD74h

Police investigating a Halloween night party shooting in the San Francisco Bay area that killed four people are now saying that an unknown number of people were wounded.

Authorities originally reported Friday that four people were wounded at the shooting at a home in the city of Orinda that had been rented out on Airbnb for what the renter told the homeowner would be a reunion.

The Contra Costa County Sheriff’s office said later on Facebook that the exact number of wounded victims was unknown because some went on their own to hospitals without the assistance of authorities.

Ben Drew, a spokesman for Muir Medical Center where wounded people were taken, says the facility received one victim in critical condition, another person in serious condition and a third who was treated and released.

He said he could not specify their injuries. 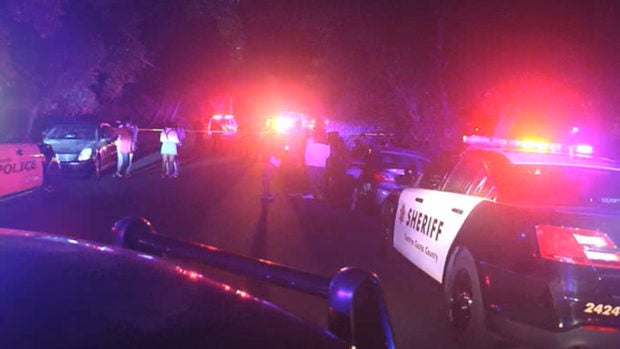 The owner of the Northern California home where four people were killed and four wounded in a Halloween night shooting says a woman had rented the home through Airbnb for a family reunion.

Michael Wang tells The San Francisco Chronicle the reunion was supposed to have a dozen people and but that scores showed up for the party in Orinda, a wealthy city east of Berkeley.

Wang says he got calls from the neighbors about the noise and that his wife reached out to the woman, who claimed there were only 12 people in the home.

He says he saw more than a dozen people there using footage from the Ring doorbell camera at his house.

Airbnb spokesman Ben Breit says in an email that the company is “urgently investigating” what happened.

Police have not released further details about the shooting.

Four people were killed and several others wounded in a shooting in northern California on Halloween night.

The Contra Costa County Sheriff’s Office announced the casualties in a tweet on Friday.

It said it is working with the police department in the city of Orinda, where the shooting took place.
Neither department has released further details.

Video from the scene posted by KGO-TV showed multiple patients being loaded into ambulances as others limped away from the scene.

A dispatcher at the sheriff’s office said the public information officer would release more information later this morning, but he did not provide a time.