Kellogg Co said on Tuesday a majority of its U.S. cereal plant workers have voted against a new five-year contract, forcing it to hire permanent replacements as employees extend a strike that started more than two months ago.

Temporary replacements have already been working at the company’s cereal plants in Michigan, Nebraska, Pennsylvania and Tennessee where 1,400 union members went on strike on Oct. 5 as their contracts expired and talks over payment and benefits stalled.

“Interest in the (permanent replacement) roles has been strong at all four plants, as expected. We expect some of the new hires to start with the company very soon,” Kellogg spokesperson Kris Bahner said.

Kellogg also said there was no further bargaining scheduled and it had no plans to meet with the union. 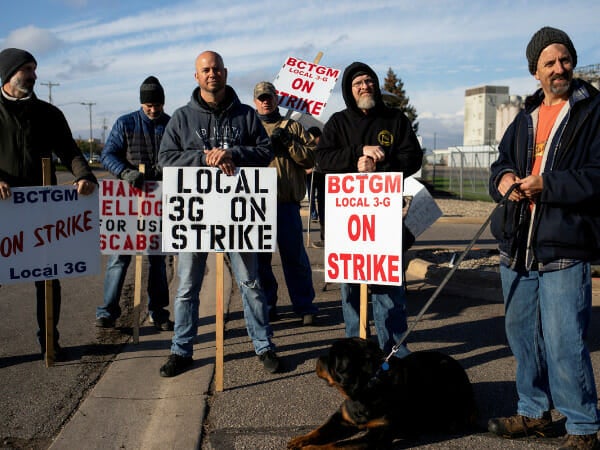 A group of union workers from Kellogg’s picket outside the cereal maker’s headquarters as they remain on strike in Battle Creek, Michigan, U.S., October 21, 2021. REUTERS/Emily Elconin/File Photo

The company said “unrealistic expectations” created by the union meant none of its six offers, including the latest one that was put to vote, which proposed wage increases and allowed all transitional employees with four or more years of service to move to legacy positions, came to fruition.

“They have made a ‘clear path’ – but while it is clear – it is too long and not fair to many,” union member Jeffrey Jens said.

Union members have said the proposed two-tier system, in which transitional employees get lesser pay and benefits compared to longer-tenured workers, would take power away from the union by removing the cap on the number of lower-tier employees.

Several politicians including Bernie Sanders and Elizabeth Warren have backed the union, while many customers have said they are boycotting Kellogg’s products.

Kellogg is among several U.S. firms, including Deere & Co, that has faced worker strikes in recent months as the labor market tightens.

(Reporting by Praveen Paramasivam in Bengaluru; Editing by Arun Koyyur and Shounak Dasgupta)