Squid Game - Truth and Meaning Behind It I Entertainment

The truth and meaning behind Squid Game

Netflix has made it once again! Just as expected with any action superhero plots to hit it big, you know it’s pretty huge if it made noise on social media. The ever-popular Netflix series Squid Game has created a buzz blowing up on social media platforms.

Originally set to be called “Round Six”, Netflix has announced plans for the series in September 2019. Though this isn’t one of those feel-good Netflix movies that’ll sweep you up your feet, we can guarantee this show is something that’ll wake up your senses.

Whether you’ve already finished watching Squid Game, or you’ve just been bombarded by memes your friends tagged you on, start watching now! According to Fox Business, Squid Game was one of the most-watched series on Netflix.

The Squid Game numbers are insane 🤯

Netflix says the show has created $900 million in value but cost just $21 million to produce.

If you’ve already joined the bandwagon and have seen every meme or TikTok post, there’s still a bunch you probably didn’t know. Warning though, there are tidbits of spoilers ahead. We wanted to keep you in the loop so here’s the truth and every meaning behind Squid Game.

Something this great couldn’t possibly be just an overnight success. The creation of the story dated back to 2008. It took over a decade for the creator to find a network to produce it. His idea of the plot came from reading a comic book with a similar plot. Over the years, he tried selling the story to different locations. But no one was open to doing such a violent plot at that time. While the creator revealed that he also struggled with funding, times turned and Netflix picked up his story 10 years later.

Hwang said, “After about 12 years, the world has changed into a place where such peculiar, violent survival stories are welcomed.” 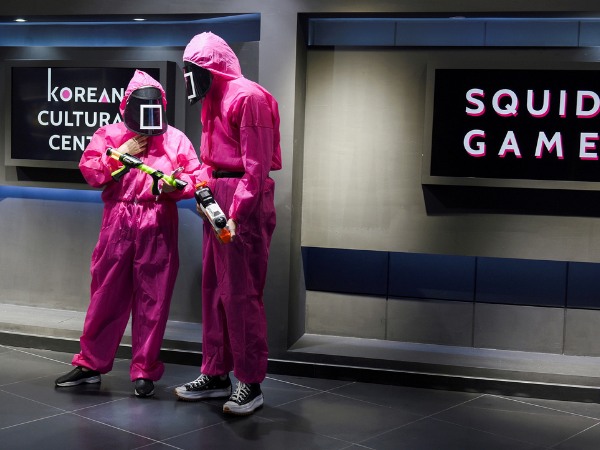 Squid Game was supposed to be a movie

There’s no surprise in here knowing the creator’s background on films. With his hit movies “Silenced” and “The Fortress”, he also directed the musical “Miss Granny” that’s a popular Korean film. Hwang told Variety that this project was created as a film.

He also revealed that the original movie cast doesn’t include police officer Jun-Ho. Not only that, Ji-Yeong the woman who sacrificed herself for Sae-byeok was originally a male. According to Hwang, the gender change seemed necessary as “a bond between women would make more sense”.

The phone number on the Squid Game card is real

Remember the first episode? It’s where the contenders get in the game by dialing in the number on the mysterious cards. Well, that phone number belongs to someone.

Yes, you’ve read it right. The phone number is real and belongs to a man named Gil-Young Kim. Unfortunately for him, 4000 calls a day have been pouring in since Squid Game’s massive hype.

Though there’s still no update if the Squid Game team has to face any repercussions for displaying a real phone number on the show. However, with the popularity of the show, South Korea’s president has offered $85,000 to the owner of the number. This is in exchange for the phone number.

Though these are subtly hidden by the high bunk beds of the Squid Game players, some drawings are also clues for the games.

You can see and visit the creepy oversized doll

If this eerie doll has been in your nightmares, wait until you see it in person. Oh yes, it’s a real creation! This doll is in Jincheon County, an area that’s three hours from North Seoul. Though this giant doll was just borrowed for filming, it guards the entrance of a horse-carriage museum. Though recently the doll was missing its one hand. Which is why it has been temporarily taken away.

The dalgona candy gave birth to a new TikTok trend

We won’t be surprised if this game has been everyone’s favorite. No wonder it has spawned a TikTok trend wherein TikTokers are creating their version.

Though the candy just consists of sugar and baking soda, the challenge is quite difficult. The image on the treat should be cut precisely without breaking it.

Creator Hwang said he wanted to showcase the real issues some of the Korean families are facing. Thus, he used a real-life report during the last episode. A news anchor reported on that episode, “In this country household debt is on the rise, topping the global average. It’s the biggest increase in the world besides China due to lifted government restrictions on financial loans.”

While many of us are waiting for the next season, sadly there weren’t any plans yet for the second part. Hwang told Variety, “I don’t have well-developed plans for Squid Game 2. It is quite Siri ng just thinking about it. But if I were to do it, I would certainly not do it alone. I’d consider using a writer’s room and would want multiple experienced directors.”