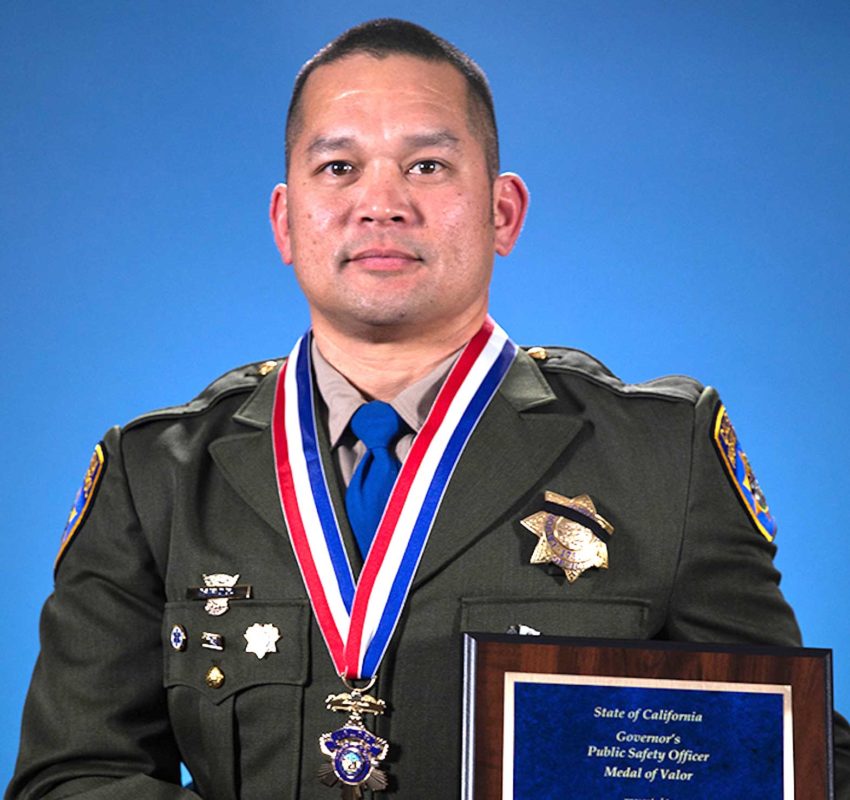 SACRAMENTO, California – California Highway Patrol Officer Michael Panlilio received the Medal of Valor from Governor Gavin Newsom and Attorney General Xavier Becerra on Jan. 25 for “unparalleled heroism in service to their communities, risking their own safety to save lives.”

On June 19, 2019, CHP Officer Michael Panlilio responded to a request for assistance by the Sacramento Police Department (SPD) at a Sacramento residence. The SPD advised Panlilio that Officer Tara O’Sullivan of the SPD had been shot and was lying in the backyard of a residence. Any attempt to rescue her was met with gunfire by the barricaded suspect.

Panlilio responded to the scene without hesitation and began working with allied agency personnel to actively assess the situation. The suspect was using a high-power rifle, capable of penetrating department-issued ballistic vest material. The suspect was also shooting from an elevated position, obscured behind the walls of his home, and using security cameras to monitor the exact positions of on-scene law enforcement personnel.

Despite the extreme danger, Panlilio made the decision to leave his position of safety and join the effort to rescue O’Sullivan. He entered an armored vehicle, which came under fire as it breached the backyard fence and was positioned between the gunman and O’Sullivan.

Panlilio helped carry Officer O’Sullivan approximately 30 feet away from the armored vehicle to an awaiting SPD patrol vehicle so that she could be transported to the hospital. The gunman fired several rifle rounds at Panlilio and Deputy Nielson as they moved to the patrol vehicle.

Once inside the vehicle, Panlilio directed the driver to transport them immediately to the UC Davis Medical Center. While en route, Panlilio used his advanced medical training to guide Deputy Nielsen in helping him perform a two-person cardiopulmonary resuscitation. Unfortunately, despite their valiant efforts, Officer O’Sullivan succumbed to her injuries.

For his extraordinary bravery, heroism and courage in the face of imminent and personal life-threatening peril, Officer Panlilio’s actions were “above and beyond the call of duty and exemplify the highest standards of a California public safety officer.”