On July 4, 1946, following Japan’s defeat in World War ll, the United States granted independence to the Philippines, a U.S. possession since 1898. Today, the 4th of July is observed in the Philippines as Philippine-American Friendship Day, a day that pays tribute to the long partnership between the two countries.

More than 260,000 Filipinos fought during the four-year campaign that resulted in some 57,000 killed and thousands more wounded. The Japanese invasion resulted in the capture of some 76,000 American and Filipino Prisoners of War who endured the Bataan Death March.

Despite the fall of the Philippines to Japan, Filipinos remained loyal to the U.S., with hundreds of thousands of soldiers and citizens forming guerrilla regiments during the occupation to engage in sabotage and intelligence work and help lay the groundwork for the U.S. return in 1944.

MAGDALENA LEONES, ‘a soldier with a distinguished record of service.’ 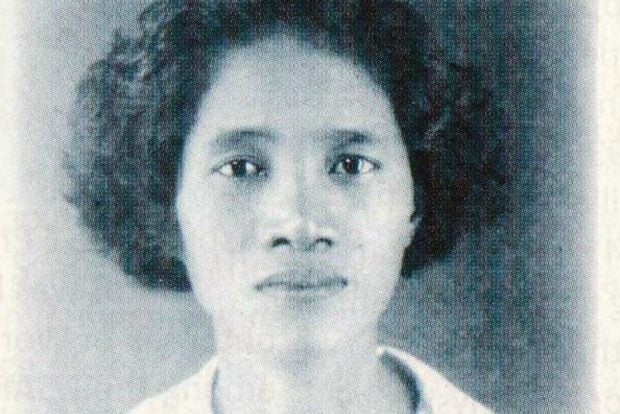 Among these brave citizens was Magdalena E. Leones. Born in the mountains of Kalinga, she was a 22-year-old teacher studying to be a nun. She and her family served with American missionaries prior to the war. When Corregidor fell on May 6, 1942, she was incarcerated along with the missionaries in prison camps, where she learned to speak Nippongo, the Japanese language. After her release seven months later, she joined the guerrillas and became an intelligence officer for the United States Army Forces in the Philippines-Northern Luzon (USAFIP-NIL). For her “tenacity, determination and uncommon courage,” Col. Volckmann formally enlisted Leones into the Philippine Army with a rank of Corporal, and later promoted her to Lieutenant.

Operating mostly by herself, Leones infiltrated behind enemy lines, exchanged information with resistance leaders, carried medical supplies and, more importantly, collected information on enemy dispositions and installations. She took note of the names of enemy ships docked in La Union, their contents and the names of their skippers. She was also credited with blowing up planes on an airstrip in Tuguegarao.

Although she was detained by Japanese Forces three times, she escaped to continue with her tasks. She witnessed the execution of Filipinos and intervened to save the lives of others through her knowledge of Niponggo, which she learned while she was in jail. At one point, she explained to a Japanese commander who was ready to fire upon a group of returning Filipino evacuees that they came from a wedding.

“For gallantry in action at Luzon, Philippine Islands, from 27 February to 26 September 1944. During the period cited, Corporal Leones repeatedly risked her life to carry important intelligence data, vital radio parts and medical supplies through heavily garrisoned enemy-held territory. Although she knew that detection by the enemy would result in torture and execution, Corporal Leones fearlessly continued her perilous missions between guerrilla forces throughout Luzon with notable success. Through her intrepidity and skill as a special agent, Corporal Leones contributed materially to the early liberation of the Philippines.”

After the war, Leones moved to California in 1969 where she worked as a clerk at Pacific Bell. She kept a low profile and never talked about her war exploits. One of her sons only learned about it when he started doing research. “She always kept it a big secret,” her son said. Her granddaughter once wrote a school report about her and had to bring the medal to school because her teacher didn’t believe that her grandmother was a war hero.

Her body was flown to the Philippines where she was buried in full military honors at the Heroes’ Cemetery. She is survived by her lone surviving daughter, Ali Leones Matyas,  three sons, 13 grandchildren, and three great grandchildren.

While Leones was an unsung hero in the Philippines, whose achievements were not written about in history books, she was awarded the Philippine Liberation Medal, the World War II Medal, and the Philippine Independence Ribbon. She has also earned the title, “Lionness of the Filipina Agents.”

In a tribute to Leones on Memorial Day last year, FilVetREP Chairman Maj. Gen. Antonio Taguba said: “All too often, we present men who were recognized for gallantry and intrepidity in the face of the enemy. This woman is clearly extraordinary, a soldier with a distinguished record of service fighting the Japanese Imperial Forces in the Philippines.” 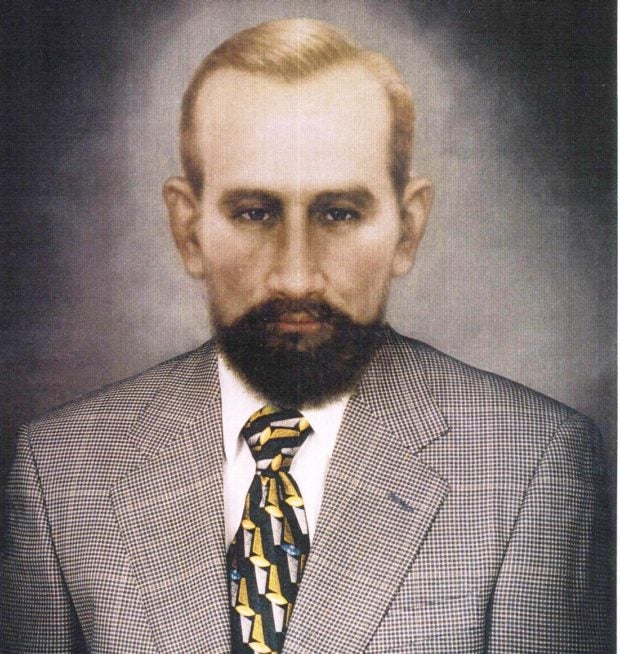 Master Sgt. Aaron Kliatchko, known as the “Rabbi of Cabanatuan,” was honored on June 28, 2018 with a formal military funeral at Arlington National Cemetery.

When the Japanese invaded the Philippines in December 1941, Kliatchko volunteered as an American intelligence agent, fighting the invading Japanese on the Bataan peninsula. He was on Bataan when U.S. forces surrendered on April 9, 1942; he survived the Bataan Death March.

In June 1942, after the Japanese released the captured Filipino soldiers, the surviving American POWs were moved to the Cabanatuan Prison Camp, where Kliatchko remained until December 1944.

At the prison camp, Kliatchko helped lead Jewish services and funerals, comforting Jew and Gentile alike. With his long white beard and impressive singing voice, he soon became known as the “Rabbi of Cabanatuan.”

At the camp, the Japanese assigned him to shepherd carabaos (water buffalo) that transported supplies from the town to the POW camp. The task took him outside the camp where he would smuggle notes, money, and medicines for his fellow prisoners. Unfortunately, his Japanese captors eventually discovered his courier service and subjected him to months of solitary confinement with reduced rations.

On December 13, 1944, Kliatchko was among more than 1,600 prisoners, mostly officers and medical personnel, who were boarded on the hell ship Oryoku Maru, destined for slave labor in Japan. It was the last hell ship from the Philippines to Japan. This ship was sunk near Subic Bay by American bombers off the carrier USS Hornet shortly after leaving Manila.

The survivors, including Kliatchko, were put aboard two other hell ships to continue the voyage north. Kliatchko died from his wounds on December 31, 1944 aboard the Brazil Maru as it arrived in Takeo Harbor, Formosa. It is unknown where his body rests. In 1948, he was posthumously awarded the Medal of Freedom, the highest honor the U.S. can give a civilian.

Born in 1887 to an Orthodox Jewish family in Minsk, the capital of today’s Belarus, Kliatchko was a teenager when he was forced to serve in the Russian Imperial Army during the Russo-Japanese War (1904-05). After the war, he studied to become a cantor, a singer of Jewish liturgical music.

In 1907, he immigrated to the United States and later enlisted in the U.S. Army, becoming a U.S. citizen in July 1913. When the U.S. entered World War I, he joined the American Expeditionary Forces.

In November 1915, he boarded the troop transport USAT Thomas to the Philippine Islands. His regiment was stationed there to help modernize the fortress island of Corregidor in Manila Bay. He remained in the Philippines during World War II and helped in the country’s liberation. 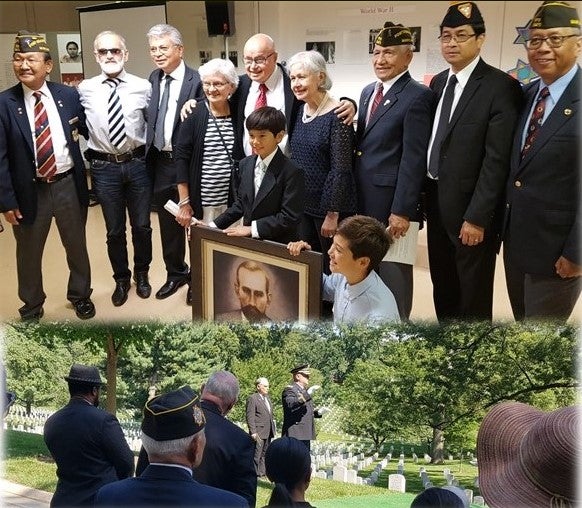 “Today, we remember with gratitude Corporal Magdalena Leones and Master Sgt. Aaron Kliatchko,” Taguba said. “One way to honor them is to tell their stories and remember their courageous acts and uncommon valor.”

To ensure that their stories are preserved for posterity, the Filipino Veterans Recognition and Education Project (FilVetREP) is creating a national program in partnership with the Smithsonian Institution, Department of Education, U.S. Army, colleges and universities, education and nonprofit organizations, and community organizations. The goal is to educate the public and raise public awareness of the Filipino and American Soldier experience and outstanding contributions during World War II.

The Filipino Veterans of World War II Congressional Gold Medal will be the focal point and centerpiece of this program.

To make this undertaking possible and make it accessible to schools and the public, FilVetREP is appealing for support from the community. “This is an American story, with historical and educational significance in U.S. history and culture,” Taguba said.

To donate, go to www.filvetrep.org.