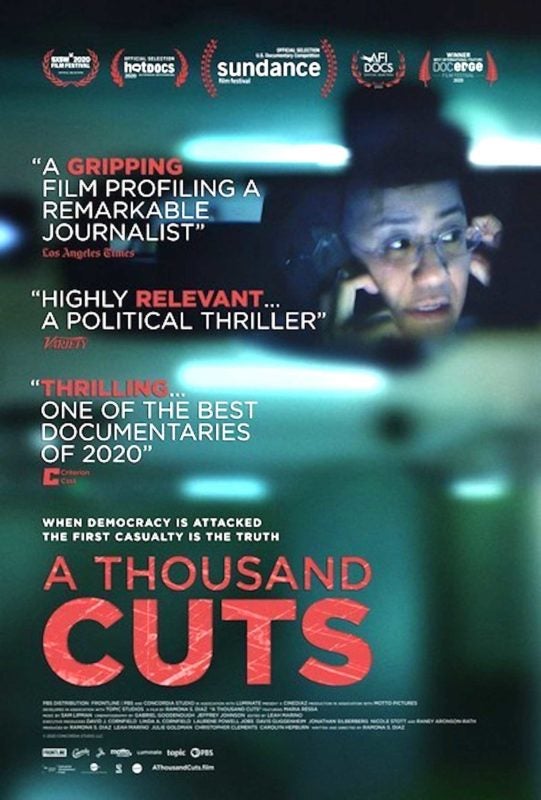 “In 2016, it was really, really laughable. And I thought, ‘Oh, doesn’t matter.’ I laughed,” said the country’s most well-known journalist and leader of the independent Rappler news organization.

Grim reality set in as Ressa was arrested and thrown in jail, targeted in a series of criminal cases and convicted this summer on libel and tax evasion charges seen widely as attacks on press freedom. She now faces six years in prison.

The film argues that Americans should learn from the recent history of the Philippines, where social media has helped to divide the country and critical press outlets are regularly lambasted by the president. ABS-CBN, the country’s largest TV network, was shut down by the government’s telecommunications regulator in May.

Promoting the film in a Zoom interview from her home in Manila, Ressa shook her fists and laughed with dark humor — “Urgh! Angry!” — about what she called her “war of attrition” with the government. She’s pleaded not guilty and is appealing her convictions.

“You don’t know how powerful government is until you come under attack the way we have. When all the different parts of government work against you — it’s kind of shocking,” she said. “I can’t wait to really write this — because I can’t write at all right now, because then I would be in contempt of court.”

Facebook has become the center of the internet for most Filipinos, and Rappler utilized it to grow rapidly as a startup news site. But the film shows how Duterte’s populist campaign harnessed the platform to spread its message and target Ressa and other journalists.

Duterte supporters live-streamed protests at the Rappler office, and death threats flooded the comments alongside red heart emojis. Disinformation on the social media platform exacerbated the problem, she said.

“Social media, the tech platforms have created a system where lies laced with anger and hate spread faster than facts. And it has placed people like me at risk,” Ressa said.Ressa began wearing a bulletproof vest because of threats. She is seen in the film repeatedly pleading with Facebook representatives to delete violent posts or cut live streams. Last month, she grew frustrated watching Facebook founder Mark Zuckerberg and other tech leaders speak before the U.S. Congress.

“For the tech giants, it’s willful blindness, willful ignorance, willful arrogance — because people like me are feeling the impact of the decisions they make,” Ressa said.

Diaz, who spoke from her home in Baltimore, hopes her film can help protect Ressa — and other independent journalists.

“It’s a global story,” she said. “There are very many Marias around the world. And that’s why it’s key to keep the story of press freedom … and the importance of independent media alive.”

Even during a pandemic shutdown and under court-ordered restrictions, Ressa is doing her part.

“Part of the reason we’ve survived the last four years is because I haven’t stopped talking,” she said. “That’s the best strategy so far to deal with a government that wants you to shut up. Don’t shut up!”