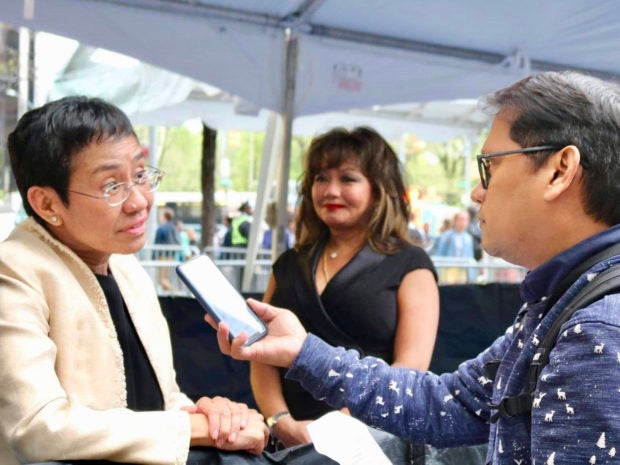 NEW YORK — Maria Ressa, CEO and executive editor of Rappler.com, was in town Tuesday night, April 23 to be honored at the TIME 100 gala. Listed as one of the 13 icons among the 100 Most Influential People of 2019 along with Michelle Obama, Spike Lee and Lady Gaga, Ressa is the only Filipino honoree. Her unshrinking courage was lauded by former United States Secretary of State Madeleine Albright in the tribute published by TIME.

Before walking the red carpet at the TIME 100 gala, Ressa answered INQUIRER Correspondent Elton Lugay’s 10 questions with healthy conviction, at times looking straight into the camera as though addressing President Rodrigo Duterte, who has branded her as one of the journalists seeking to depose him. Excerpts from the interview:

INQ: Tell us how much this TIME 100 honor means to you.

Maria Ressa (MR): For us, it’s actually great in the sense that it shows that the eyes of the world are on the Philippines. And that’s positive and negative—positive for those fighting for press freedom, negative in the sense that, you know, I think part of the reason I’m even here is that we have to fight for press freedom! So I hope with the kind of attention that we’re getting, that the government helps bring a more robust democracy in place. 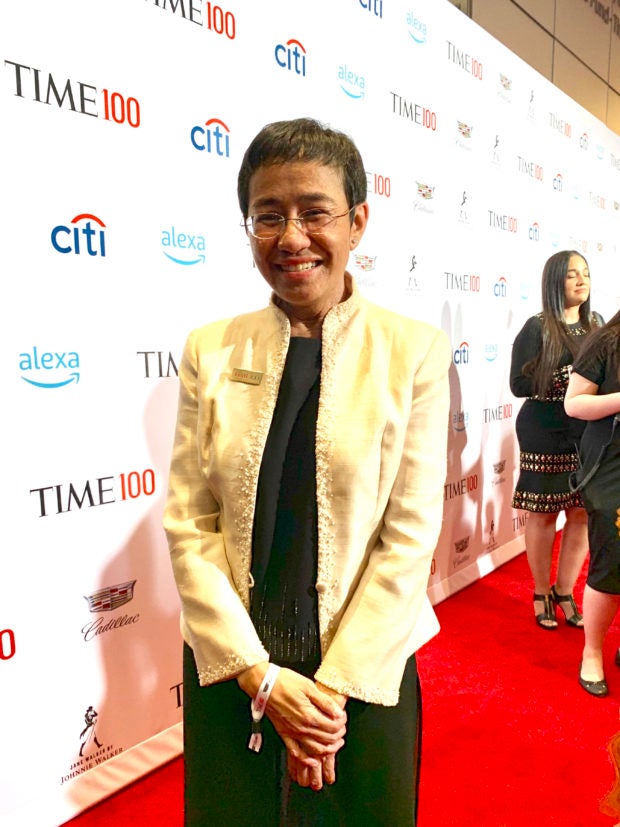 Maria Ressa, CEO and Executive Editor of Rappler.com, flew to New Yorkfor the 2019 TIME 100 gala Tuesday night. She is the only Filipino onthe list of 100 Most Influential People in the World. ELTON LUGAY

INQ: You are getting this recognition amid President Duterte’s strong defiance to everyone’s human rights allegations. Is there any sense of vindication on a professional level?

MR: I don’t know. You know, I’m not fighting Duterte! All I’m trying to do is to do my job, ‘di ba? We’re just trying to do our jobs! He does his job. Let us do our job. He should just answer the questions.

INQ: How do you get yourself going each morning knowing that the country’s highest leader is watching your every move?

MR: Oh, I don’t think he is. I hope he does his job because his job is huge, right? I think that what we’re trying to do is to be the best journalists we can be in the world. And the fact that Time has recognized our work, the work of Filipino journalists, that’s incredible.

Now, I think we have, like the rest of the world, a battle in front of us. It’s an existential moment for both journalism and for democracy. And we need to make sure that our people understand that social media (are) both a force for good and a force for evil. That they should not be manipulated, that information operations on social media should not allow our democracy to get cut down.

INQ: Maria, do you get death threats? And if so, do you take them seriously?

MR: You know, I think more when I was reporting on terrorists. I mean, this is a new type of terrorism, weaponizing social media. Everyone feels that, right? Weaponizing the law—well, Rappler is an example of how far the government will go. Eleven cases in 14 months? That’s almost a case a month. That’s insane! And then, now there’s been this matrix that everyone has turned into a meme because the foundation of it is just really ridiculous.

I always hope for the best. And I believe that if we do our jobs well, we will create a better society and a better system of governance.

INQ: On Duterte’s ouster plot, your name has been mentioned yet again as among the journalists involved. Where do you think this came from?

MR: Fantasy? Somebody dreamed it up. I mean, you can see from the reactions of the journalists, the lawyers [and] human rights advocates who are there. I mean, it’s fantasy! I can’t think of any other word because it actually shows us a lot more about the state of mind of the administration and this level or lack of intelligence of our intelligence services. We expect better! Good God! Medyo nakakahiya na siya, ha! (It’s quite embarrassing.)

INQ: Why do you think you’re a favorite target or scapegoat of Duterte allies?

INQ: What was going through your mind when you got arrested three weeks ago?

MR: I couldn’t believe it. Really, I couldn’t believe it. But at the same time, I was like, “Uh, it’s happening.” And so the first is really anger management, “di ba?” You don’t want to be angry. And shock that, you know, many of the NBI, the police, would say, “Ma’am, pasensya na po. Trabaho lang po ito.” (“Ma’am, we’re just doing our jobs.”) [Me] Hindi po ito trabaho lang, ha! Kung may sinasabi po sa inyo na dapat niyong gawin na hindi po makatarungan, dapat hindi niyo po ‘yun ginagawa! Magtanong po tayo ngayon, ‘no?! (Excuse me, that’s not the case. If someone tells you to do something that is unjustifiable, then you should not do it. It’s time to ask questions)

Thirty-three years after the people power revolt, it is sad that we are returning or regressing to (something) that looks like what we had already fought hard to get out of–revising history. Facts are facts!

INQ: At this point, do you fear for your personal safety and the future of Rappler as a news organization?

MR: Let me put it this way, prepare for the worst and hope for the best. We know the risks that are there. But, part of the reason I continue to speak, as we all should, is because if you don’t exercise your rights, they will be taken away from you. This is the time to speak! This is the time to draw the line and hold the line, right? Post-elections! Maria Ressa: “I’m a journalist… I fight for the rights that areguaranteed by the Philippine Constitution.” RASMIN DIAZ

These elections are incredibly important to the Philippines. If we lose an independent Senate, a lot of things can change. A new Constitution can be put in place, in which case, we may no longer be a democracy. As long as we are a democracy in name, let’s be a democracy in substance.

INQ: Would you consider yourself as an activist?

MR: I’m a journalist, you know. I fight for the rights that are guaranteed by the Philippine Constitution.

INQ: If there’s one thing to admire about Duterte’s leadership style, what would it be?

MR: Some of President Duterte’s critics say that Rappler helped elect him. I think all we did was we covered him fairly. He is a novelty. The way he speaks is very authentic. I suppose what I hope for is that a competent system of governance [be] put in place along with plain talk, along with an authentic style. And I also hope that we’re cautious about rolling back values like women’s rights, empowerment of women! The level of sexism and misogyny that we’ve had to endure is off the scale.

But did I answer your question? What is good? I mean our economy so far is doing well. But you would expect that. It was coming from a high. We’re halfway through, right? Or almost halfway through. I think that really, truly governing a nation is challenging. I think that the government should focus on the problems that they need to solve instead of focusing on perceived enemies or on information operations on social media that is meant to mislead its own people. It should not be afraid of its people. It should not be afraid of journalists. It should try to make our democracy better by having discussions with facts.