A determined Indiana fightback and last-minute heroics by Malcolm Brogdon and Domantas Sabonis led the Pacers to a dramatic 105-102 upset of the NBA-best Los Angeles Lakers on Tuesday.

LeBron is having the best Year 17 we've ever seen, says @HowardBeck 👑

Lakers vs. Bucks is Thursday night on TNT pic.twitter.com/uhSXQi9llY

“Definitely a big win for us,” Brogdon said. “We really wanted to send a message to the elite teams in the league and get some respect. We’ve had some big wins but this is the biggest one.”

The Lakers (24-4) fell level with Milwaukee for the NBA’s best record just two days before they visit the Eastern Conference leaders in a potential NBA Finals showdown.

LeBron James if he saw something special in Dwight Howard tonight as the Lakers big man went 10-for-10 from the field tonight: pic.twitter.com/ZY2HltSG9y

“The difference between winning and losing was made shots versus missed shots,” James said. “Sometimes the ball happens that way.”

Davis — the Lakers’ leader in points, rebounds and blocked shots — was absent due to a right ankle sprain suffered in a Sunday victory over Atlanta.

Dwight Howard had 20 points on 10-of-10 shooting for the Lakers. 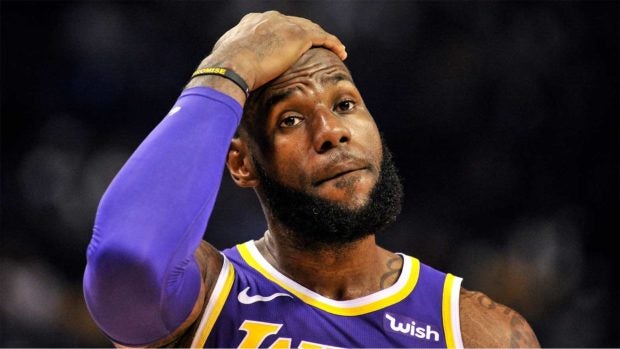 “Our guys competed for their tails off,” Lakers coach Frank Vogel said. “I’m very proud of them.”

LA, which led by as many as 10 points, was ahead only 52-50 at half-time with James hitting 13 points, seven rebounds and six assists in the first half.

After Brogdon’s layup gave Indiana a 104-102 lead, James missed a 3-pointer and a video reversal on an out-of-bounds call gave the Pacers the ball. Sabonis made a free throw but missed the second to give the Lakers a final chance but Rajon Rondo missed a last 3-point shot and LA’s seven-game overall win streak was over.

“We just had to execute down the stretch, get some stops and make good shots,” Sabonis said. “We played a whole 48 minutes. We got the stops out there. That was key for us.”

Bahamian 21-year-old center Deandre Ayton, the 2018 NBA Draft top pick, returned to the Suns after a 25-game suspension for testing positive for a banned diuretic following the season opener.

Ayton scored 18 points on 9-of-19 shooting from the floor and grabbed a game-high 12 rebounds.

“It was the biggest mistake in my life, an unintentional mistake,” he said of his doping ban. “I did not know what I put in my body. I was guilty of it. (I’m) closing the circle much tighter and cooking my own food.

“I have an organization that loves me. They helped me a lot on this journey so I could come back and play.”

Spencer Dinwiddie scored six of his game-high 31 points in overtime to lead the Brooklyn Nets past host New Orleans 108-101.