House Votes on Impeaching Trump for Abuse of Office

House Votes on Impeaching Trump for Abuse of Office

President Donald Trump was facing a historic vote in the House of Representatives to impeach him for abuse of office on Wednesday, as the US leader furiously accused rival Democrats of an “assault on America.”

The bitterly divided chamber opened its session with a prayer for “wisdom” by its chaplain before debating the charges of high crimes and misdemeanors brought against the 45th US president.

It's wonderful to see Rep. @tedlieu back to his usual, insightful self on the floor of the House for today's #TrumpImpeachment debate.pic.twitter.com/fS6pJPLO1h

The Democratic-controlled House is expected to approve two articles of impeachment — abuse of office and obstruction of Congress — after a debate lasting much of the day, setting up a January trial in the Senate, where Trump’s Republicans hold a 53-47 seat edge.

The stark partisan split over impeaching the convention-wrecking billionaire populist was on display from the very start of the proceedings on the House floor.

“It is tragic that the president’s reckless actions, make impeachment necessary,” House Speaker Nancy Pelosi said in her opening remarks which were greeted with applause by fellow Democrats.

“He gave us no choice,” Pelosi said. “The president is an ongoing threat to our national security, and the integrity of our elections, the basis of our democracy.”

Doug Collins, a Republican lawmaker from Georgia, countered that “the president did nothing wrong.”

Democrats were seeking to impeach Trump because they are afraid to face him in the November 2020 presidential election, Collins said.

#MerryImpeachmas #tRumpImpeachment
I really shouldn't be Tweeting this… but I just can't help myself.
I hope Santa doesn't give me a lump of coal now. pic.twitter.com/F24KCRezbs

“They said we can’t beat him if we don’t impeach him,” he said. “The American people will see through this.”

Debbie Lesko, a Republican from Arizona, said Trump was being subjected to “the most unfair, politically biased rigged process that I have seen in my entire life.

“There is no proof, none, that the president has committed an impeachable offense,” Lesko said. “This is the most partisan impeachment in the history of the United States.”

Trump is accused of withholding military aid to Ukraine to try to force the country to open a corruption probe into a main 2020 rival, Democrat Joe Biden.

The president is also accused of obstructing Congress by refusing to cooperate with the impeachment investigation, barring staff from testifying and holding back documentary evidence.

This abuse of power undermines the integrity of our elections. #ImpeachmentDay #TrumpImpeachment pic.twitter.com/4wi81crDDR

Facing the biggest political crisis yet of his tumultuous three years in the White House, Trump adopted his usual tone of fiery defiance.

Arguably the most polarizing US leader in living memory, Trump was spending the day holed up at the White House, sending out streams of tweets reflecting his frustration, anger, and predictions of revenge in next year’s election.

“Can you believe that I will be impeached today by the Radical Left, Do Nothing Democrats, AND I DID NOTHING WRONG! A terrible thing.”

“He will be briefed by staff throughout that day, and could catch some of the proceedings between meetings,” Grisham said.

Later Trump was to fly to the electoral swing state of Michigan for a rally with thousands of his most loyal supporters — possibly right around the time of the House vote. 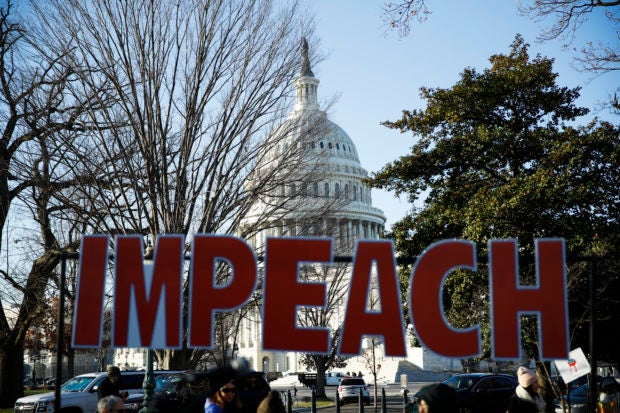 Protesters demonstrate as the House of Representatives begins debate on the articles of impeachment against President Donald Trump at the U.S. Capitol building, Wednesday, Dec. 18, 2019, on Capitol Hill in Washington. (AP Photo/Matt Rourke)

Although impeachment will put an ugly asterisk by Trump’s name in the history books — alongside Andrew Johnson in 1868 and Bill Clinton in 1998 — he predicts the scandal will galvanize his base in the 2020 presidential polls.

On the eve of impeachment, he wrote an extraordinary six-page letter to Pelosi accusing her of an “attempted coup,” a “charade” and treating him less fairly than at a witch trial.

Republicans in Congress reject the impeachment unanimously. Democrats overwhelmingly support, but leaders are sweating over the possibility that several legislators may break ranks and vote no out of fear of retribution from pro-Trump voters in swing districts back home.

Trump is Not All There

Massachusetts Democrat Jim McGovern said it was up to the House to decide “whether the United States is still a nation where no one is above the law.

“Or whether America becomes a land run by those who act more like kings or queens as if the law doesn’t apply to them.”

Pelosi has tried to show she is taking the high road in a saga that has seen both sides, and especially Trump himself, repeatedly accuse opponents of everything from treason to stupidity.

But she dropped her icy demeanor after Trump published his lengthy letter, much of it reads like an extended version of his stream-of-consciousness tweets.

The letter was “really sick,” she said.

Protests in support of impeachment broke out in several cities including New York, Boston, New Orleans, and Los Angeles and as the House debate got underway, demonstrators rallied outside making their views clear in giant red letters spelling out the word “IMPEACH.”