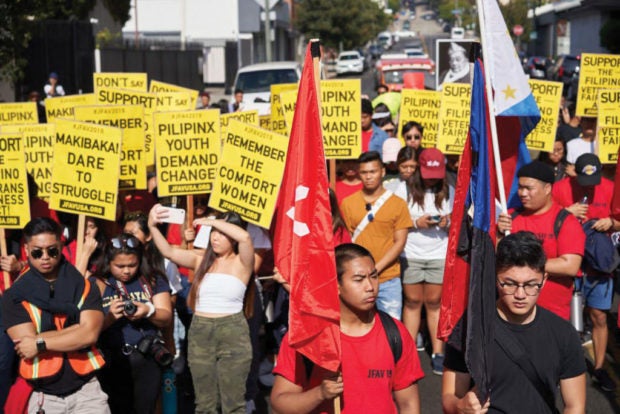 Monday’s march marked the 19th year that JFAV has hosted the demonstration aimed at raising awareness and showing support for the nearly quarter-million Filipino WWII vets who have gone decades without recognition for their service.  AJPress/Noel Ty

HOLLYWOOD — Filipino veterans and their advocates once again came together Monday, November 11 to press for recognition and the rights for Filipino World War II veterans.

Monday’s demonstration was the 19th annual march, organized by Justice for Filipino American Veterans (JFAV), and just like past marches, it called for national recognition and legislative solutions for the concerns of the nearly quarter-million Filipinos who fought under the American flag during WWII.

Placard-bearing Filipinos of all ages gathered on Hollywood Boulevard and Ivar Avenue in the heart of Hollywood, their hearts filled with passion for the cause that brought them together.

In 2017, the United States awarded the Congressional Gold Medal to the surviving Filipino WWII veterans and the family members of those who had fallen, but JFAV is calling for concrete solutions that could “appropriately bring justice” to the Filipino veteran community.

“It was a milestone for our Filipino WWII veterans and their families to receive this honor, but today we are asking for four things, four things that could bring us closer to appropriate recognition of the Filipino World War II veterans,” Art Garcia of JFAV said on Monday.

“These four things won’t take away the decades of negligence on the part of our nation’s lawmakers, but they will right the wrongs and build a foundation for the future, the future of how we treat our veterans.” 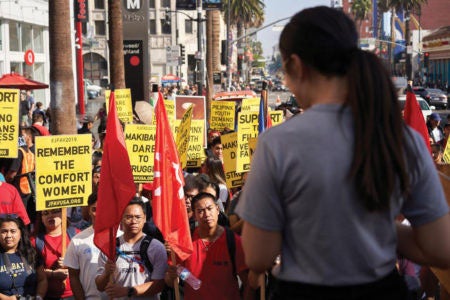 Dozens of Filipino veterans and their advocates once again came together to press for recognition and rights for Filipino World War II veterans last Monday, November 11 in Hollywood, Los Angeles. AJPress/Noel Ty

Garcia explained that the impetus of the march, the four-pronged demand, included passing The Filipino Veterans Fairness Act (HR 2823), reinstating the Filipino WWII Veterans Parole Program, securing pension eligibility for survivors and their families, and removing the quitclaim.

First proposed in 1993, HR 2823 aims to guarantee citizenship to Filipinos who have served under the United States Armed Forces. Despite the bill’s failure in nearly every Congress since 1993, it continues to be re-introduced by U.S. representatives and senators of both parties.

Similarly, the Filipino WWII Veterans Parole Program, established during the Obama administration, was a family reunification immigration program that allowed family members of Filipino WWII veterans (those who were citizens or green card holders) to remain in the U.S. pending approval of their own immigrant visas.

Passed in 2016, the temporary program was set to last until 2021. But the Trump administration announced on August 2, 2019 that it would suspend the program prematurely.

As the march and protest grew throughout Monday afternoon, protesters began speaking on a so-called “cultural erasure” of Filipinos in American history.

“When we learn about World War II in school, we hardly get any mention when there were more than a quarter-million Pinoys in the war effort fighting on behalf of the Americans, and this is how they’re treated,” Sheryl Lagasan told the Asian Journal. 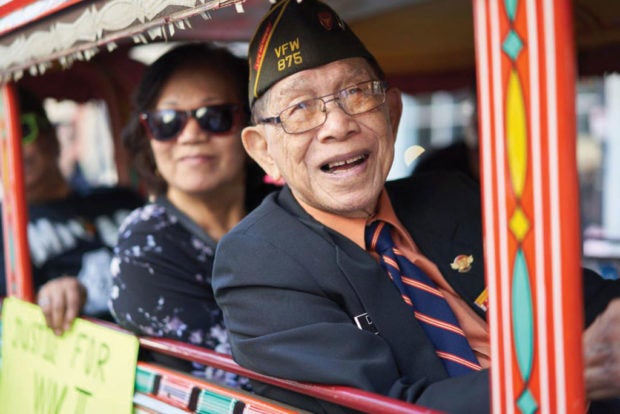 In addition to WWII veterans, Filipino veterans of the Korean, Vietnam and Gulf Wars joined the march as an act of solidarity. AJPress/Noel Ty

Lagasan referenced the Rescission Act of 1946 which denied military benefits to the 250,000 Filipinos who fought in the war.

“Though it was a big deal for the veterans to receive the congressional gold medal, we need structural change to address the very real needs of these veterans, a community that has been neglected for so long,” Lagasan said.

Others called for extending the awareness to other concerns of the veteran community, pointing out the dissonance of instituting a federal holiday in the name of veterans while, at the same time, failing to address their needs through policy and government programs.

“Of course, it’s important that we have this day, Veterans Day, to honor, not just Filipino veterans, but all veterans. Of course, it’s a really significant thing we do as Americans,” Filipino American Los Angeles Community College student Paul Chavez, whose grandfather fought in the Korean War, told the Asian Journal after the demonstration.

“But it means nothing, all this praise, it means nothing if we don’t have these actions to back that up. You can’t have this sentiment without addressing the needs of these veterans and their families, and that means looking out for their mental and physical health, housing and, you know, securing all their needs.”