Donald Trump Jr. released a provocative book on Tuesday that rails against his father’s opponents, as he admitted he had caught the political bug and may consider running for office in the future.

In “Triggered: How the Left Thrives on Hate and Wants to Silence US,” the president’s eldest son lets rip at the usual suspects: Hillary Clinton, special counsel Robert Mueller, and the mainstream media.

“This is the book that the leftist elites don’t want you to read!” screams a blurb on Amazon.

Let’s send a loud message to the liberal elites. It would TRIGGER our haters coast to coast if we made the NYT list! This is the book that liberals don’t want you to read or share with others. Get your copy now! https://t.co/HKA9knF0Ko

“If you love America and red meat, and you don’t care for political correctness… you’ve come to the right place,” adds the inside cover.

Trump Jr dedicates the 300-page part memoir, part polemic to “deplorable” — a clear dig at Clinton who infamously used the term to describe Trump supporters during the 2016 presidential campaign.

The book, which details a heavy drinking youth, quickly rose to third on Amazon’s list of bestselling books after the president encouraged his 66.5 million Twitter followers to order a copy.

“A great new book that I highly recommend for ALL to read,” Trump tweeted on Monday.

Trump Jr regularly goes after the president’s enemies on social media and deploys predictably combative language in the book.

Had a great time today chatting about my new book #Triggered on #TalkIsJericho with #LeChampion @IAmJericho. We had an awesome conversation and he's a really cool dude. The podcast drops later this week and you won’t want to miss it!!! pic.twitter.com/dfZnfLZ5Is

He calls Mueller, who investigated Russian meddling in the 2016 election, an “old over-the-hill puppet” and refers to “morons” in the House of Representatives and Senate.

Trump Jr, who manages the family’s business interests with his brother Eric in New York, also says he was “vaccinated” against socialism during visits to see his grandparents in former Czechoslovakia.

He slams Bernie Sanders, a favorite of the left, and fellow Democratic 2020 candidate Joe Biden, who he says would be the “easiest candidate for my father to take apart.”

Trump Jr titles a chapter about the press “The Enemy of the People?”.

He also talks about partying too hard and giving up alcohol because he couldn’t drink in moderation.

“I began to realize that with my personality, drinking alcohol was a recipe for disaster,” he writes.

Trump Jr, 41, writes that he is addicted to Twitter and Facebook but accuses social networks of trying to censor him and other conservatives. 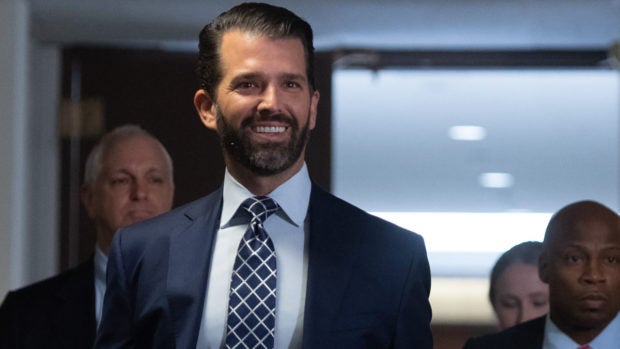 “This ‘shadow banning’ amounts to complete suppression of freedom of speech.
It can’t be allowed to continue,” he writes.

While Ivanka Trump was thought to be the most political of the president’s four adult children owing to her role as a White House advisor, Trump Jr hints that he may be tempted to run one day.

“Until my father announced that he was running for president, the idea of entering politics was about as remote as my becoming a vegan,” he writes.

While promoting the book on CBS Tuesday, Trump Jr. said he enjoyed campaigning.

“I’m interested in winning 2020 for my father right now.
We’ll worry about everything else later, adding: “I don’t rule anything out.”

“Triggered” is published by Center Street, a known publisher of conservative books.

The president has published several books, most famously “Trump: The Art of the Deal” in 1987 which became a New York Times bestseller.