A former top aide to WeWork co-founder Adam Neumann is accusing him and other executives of discriminating against her for becoming pregnant.

Medina Bardhi says in a federal complaint filed Thursday that she was demoted, derided for going on leave, and ultimately fired for raising concerns.

Bardhi, who was Neumann’s chief of staff until she was fired in October, is seeking class-action status against New York-based WeWork, claiming a pattern of discrimination against women at the office-sharing company.

Once a wool storage facility, this Sydney office space has been transformed into a beautifully designed home for WeWork 100 Harris St. We love how our designers left these original rough timber beams in place. #wework #weworksydney #sydney pic.twitter.com/XfipBaVnlv

The complaint, filed with the Equal Employment Opportunity Commission, describes a culture at WeWork in which women were paid less than men, demeaned for getting pregnant and subjected to sexually offensive conduct at alcohol-fueled company events.

“Our hope is that this class action complaint will send a loud and clear message to WeWork and other startups that pregnant women cannot be forced out of their jobs, that women must be paid fairly and afforded equal opportunities,” said Douglas Wigdor, Bardhi’s attorney.

The former CEO of WeWork is expected to get a big windfall after SoftBank said it agreed to take a majority stake in the company #WSJWhatsNow pic.twitter.com/iVh6t1Lo8n

“We have zero tolerance for discrimination of any kind.
We are committed to moving the company forward and building a company and culture that our employees can be proud of,” Rocco said.

The complaint raises a new challenge for WeWork as it tries to regain the confidence of its employees, investors, and customers in the wake of a failed attempt to enter the stock market.
Neumann stepped down as CEO on Sept. 24 and gave up his controlling shares of the company in a financing deal with Japanese conglomerate Softbank that saved WeWork from possible bankruptcy.

Bardhi said the discriminatory behavior began with her first job interview at WeWork in 2013 when Neumann “unlawfully and intrusively” asked her if she planned to get married and become pregnant.
The complaint claimed that Neumann routinely asked that question of female job candidates.

When she became pregnant in March 2016, Bardhi said she waited only a month to tell Neumann because she felt she could no longer accompany him on flights on private jets where he and other WeWork employees smoked marijuana.

She said Neumann later made derogatory comments about her in front of other WeWork employees, including some who were pregnant.
At one point, Neumann told her, “I hope you are going to have fun on your vacation while we’re here working.”

The complaint cited another top executive, WeWork Chief Legal Officer Jennifer Berrent, saying she also made derogatory comments, repeatedly referring to Bardhi’s pregnancy as a “problem” that needed “to be fixed.” 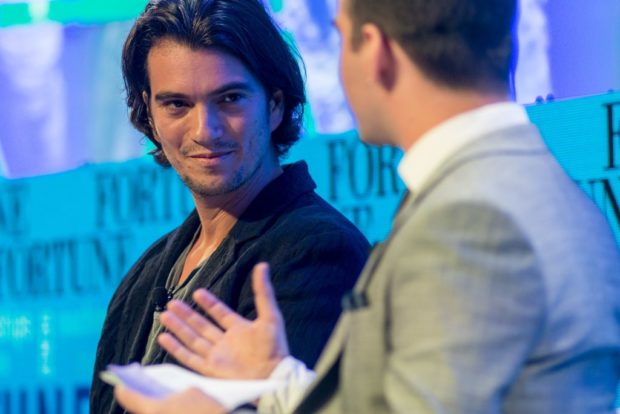 Bardhi claimed that Neumann told her soon after learning she was pregnant that he was looking to replace her as chief of staff and demote her to another role.
The complaint said the role went to a man who was offered a salary more than double what Bardhi had been earning.

Bardhi was eventually reinstalled as chief of staff.
But she claims she faced similar problems when she became pregnant again in February 2018, getting sidelined and replaced by a man who was underqualified for the job.

Despite never receiving clarity about her role after returning from leave, Neumann eventually sought her help with WeWork’s impending initial public offering of stock, according to the complaint.
At one point, in a car leaving a bank’s offices, Neumann told her in front of another employee, “I hope you enjoyed your vacation.”

Bardhi described raising complaints with multiple officials, including WeWork’s general counsel.
She said she was fired on Oct. 2 in a phone call after being told there was no role for her following Neumann’s departure.

Two other women have filed lawsuits against WeWork in New York state.
One employee, Lisa Bridges, said she coordinated a study that found gender-based pay gaps at the company, but when she presented her findings, Berrent responded by saying that men take more risks than women.
Another, Ruby Anaya, alleged she was sexually assaulted by male employees at company events.