In a windowless hangar at New York’s John F. Kennedy airport, dozens of law enforcement officers sift through packages, looking for fentanyl -a drug that is killing Americans every day.

It’s a laborious job, with more than one million items of mail, the vast majority of it innocuous, arriving at the postal sorting center from around the world every day.

“We’re looking for the proverbial needle in the haystack,” says a Customs and Border Protection (CBP) agent, standing amid piles of parcels and letters in the vast, fluorescent lamp-lit warehouse.

The US Postal Service facility has become one of the multiple fronts in America’s war on opioid addiction, which kills tens of thousands of people every year and ravages communities across the nation.

Sixty percent of all mail arriving in the United States from abroad comes through the center at JFK, and officers spend day and night checking suspicious-looking packages for deadly narcotics.

They are mainly hunting for illegally made fentanyl, a synthetic opioid 50 times more potent than heroin and up to 100 times stronger than morphine — but which is sometimes legally prescribed to ease the pain.

According to US government data, about 32,000 Americans died from opioid overdoses in 2018.
That accounts for 46 percent of all fatal overdoses.

The majority of fentanyl seized here, whether original or an “analog” product that has similar effects but a slightly different chemical formula, has been bought on the so-called “dark web,” from sites usually based in China or Hong Kong. 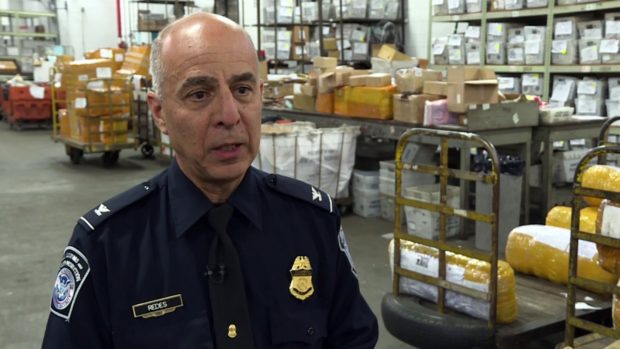 Users, often looking for an ever more euphoric high, generally pay with cryptocurrencies, a simple credit card, or PayPal, according to Ray Donovan, the New York chief of the federal Drug Enforcement Administration (DEA).

“They don’t need to leave their houses.

They can order fentanyl directly from China and have it shipped to their doorstep,” Donovan told AFP.

CBP agent and division chief Robert Redes has worked at JFK airport for more than 15 years.

Surrounded by thousands of letters and packages, he recalls when an innocent-looking musical birthday card arrived from Toronto in March 2018.

Three grams of fentanyl — enough to kill 1,500 people — were hidden inside.

The discovery led to the arrest of a 34-year-old man in Pennsylvania who had bought the synthetic opioid online.

A search of his apartment unearthed a stash of Xanax, LSD, ecstasy, marijuana and hallucinogenic mushrooms.

Because officers are more suspicious of packages coming from China, traffickers often go through an intermediary based in a third country, explains Donovan, who led the capture of Joaquin “El Chapo” Guzman, the Mexican drug lord sentenced to life in jail in July.

It is impossible to check all the mail that arrives at JFK so with the help of trained sniffer dogs, and based on intelligence they have received, officers inspect about 1,000 packages considered high-risk every day. 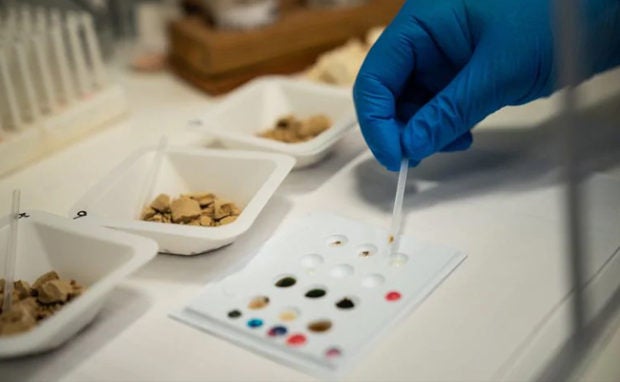 Suspicious parcels are X-rayed or examined using laser technology.
Sometimes they are opened with a knife — carefully, since inhaling just a few milligrams of fentanyl can prove fatal.

Fentanyl purchased on the internet is often extremely pure, says Redes.
It is cut and then sold on the streets.

“We’re dealing with rather small quantities,” as opposed to seizures of heroin or cocaine, which are measured in kilograms, he says.

“But it doesn’t take very much fentanyl to result in overdoses and even deaths.”

A laser spectrometer is the officers’ best weapon.
It is connected to a database that can identify 450 types of narcotics without opening the package.

Unlike private competitors such as FedEx or UPS, the US Postal Service has limited electronic tracking of mail.
Only 40 percent of incoming correspondence is tracked, complicating the work of agents.

A federal law requiring 100 percent tracking of international packages will come into force by the end of next year.

The US government has even launched a competition offering $1.5 million in prize money to anyone who can invent technology that makes it easier to detect opiates in the mail.

“It may seem overwhelming.
(But) it’s a technology that’s really going to win the day,” says Redes.

For New York’s special narcotics prosecutor Bridget Brennan — who has seen cocaine, crack, heroin and now fentanyl ravage communities in her more than 20 years investigating the drug trade — fentanyl is the “perfect product” for traffickers.

It takes about four months to turn poppies grown in Mexico’s Sierra Madre range into refined heroin, Brennan says at her Chinatown office.

Compared to making heroin, manufacturing a kilogram of fentanyl in a laboratory requires less labor and is much faster, because Mexico’s unpredictable weather is not a factor.

Fentanyl is so powerful that half a million pills can be made from just one kilo. They are then sold on the streets of the United States for $8-10 each.

According to the DEA, a kilo of fentanyl purchased in China for between $3,000 and $5,000 can generate revenue of more than $1.5 million in the United States.

Fentanyl, a powerful painkiller approved by the US Food and Drug Administration for a range of conditions, has been central to the American opioid crisis which began in the late 1990s.

The epidemic was sparked by doctors, encouraged by the pharmaceutical industry, overprescribing opioid pain medication oxycodone, sold by Purdue Pharma under the brand name OxyContin.

Drug overdoses are so frequent in part because users who purchase on the street don’t know what they are buying, says Brennan.

“They are getting pills that say they are oxycodone but are fentanyl.
Sometimes sellers don’t know what they are selling,” she told AFP.

Purdue — owned by the Sacklers, one of America’s richest families — filed for bankruptcy last month in a settlement aimed at warding off thousands of state and federal lawsuits related to the opioid emergency.

Powerful opioids like oxycodone had been intended to be used for pain relief for serious illnesses such as cancer, because of how addictive they are.

Between eight and 12 percent of patients are addicted by the end of the treatment, and many start to purchase black-market opiates or illicit drugs such as heroin, according to the National Institute on Drug Abuse.

The danger was tragically illustrated in 2016 when music icon Prince died at age 57 after overdosing on the opioid hydrocodone, which had been mixed, apparently without his knowledge, with fentanyl.

The US Centers for Disease Control and Prevention have reported more than 400,000 deaths from opioid overdoses from 1999 to 2018, with an explosion in the death rate between 2013 and 2017.

China was the first country to manufacture illegal fentanyl for the US market, but the problem surged when trafficking through Mexico began
around 2005, according to Donovan.

It was led by major cartels such as El Chapo’s Sinaloa group that were seeking to make up for losses endured when Colombian traffickers began skipping Mexico to export cocaine to Europe, Australia, Russia, and China on their own.

The Mexican cartels began to produce more poppies in an attempt to manufacture heroin as strong as that found in Colombia.

They failed though, so they started to import fentanyl from China and mix it with heroin to make it stronger and give it a competitive edge.

After El Chapo was first captured in Mexico in 2014, his sons and other traffickers started building more fentanyl labs and smuggling the drug to the US as their profits soared, says Donovan.

To reduce costs and evade Chinese laws, they then began to import only the chemical precursors of fentanyl, going on to make the finished product themselves in their clandestine labs.

President Donald Trump declared the opioid crisis a “public health emergency” in October 2017 and accused China of fueling it.

Against the backdrop of a trade war with Washington, Beijing changed its policy in May and designated all analogs of fentanyl as controlled substances.

But the list does not include many of the precursors needed to make it, allowing Mexican traffickers to fill the void, the DEA’s chief for North and Central America, Matthew Donahue, told Congress in July.

He called the manufacturer of fentanyl precursors by Mexican cartels themselves “an alarming development.”

Back at the postal center at JFK airport, seizures of fentanyl are down these days; authorities say most of it is entering the US at official border posts with Mexico.

Mixed with fillers, heroin, methamphetamines or cocaine, or in the form of small blue pills resembling OxyContin tablets, it is hidden in vehicles or trafficked by pedestrians crossing on foot.

CBP’s executive director for cargo and conveyance security, Thomas Overacker, recently acknowledged that officers can only inspect about one percent of private vehicles and 16 percent of commercial trucks that enter the US from Mexico.

Seizures are soaring nationwide, however.

Last year, the CBP intercepted 985 kilos (2,170 pounds) of illegal fentanyl and its analogs, compared to less than one kilo in 2013.

When the fentanyl reaches New York, it is mostly distributed by Dominican crime syndicates, according to the DEA’s Donovan.

They then hand over profits to Chinese money laundering gangs associated with the Mexican cartels, and which are increasingly present in Mexico, highlighting the global nature of drug trafficking networks.

US authorities have been fighting the drug trade for half a century, but in fentanyl, they are facing the deadliest drug yet.

As well as cracking down on traffickers, the government recognizes that it must also focus efforts elsewhere, such as treating addiction.

The National Institutes of Health has devoted almost $1 billion to tackle the opioid crisis.

“The fight against drug abuse is a generations-long struggle. I
t will not be completed overnight,” Donahue told the congressional hearing.