Brave Blossoms Making Rugby Popular in the US

It is early morning outside the sportswear store near the Prince Chichibu Memorial Rugby Stadium and customers are already queueing to get their hands on Japan’s hottest property: a Brave Blossoms replica shirt.

The red-and-white jerseys are flying off the shelves as the Japan team continues to defy expectations at the Rugby World Cup, winning three from three and on course for a historic quarter-final.

Japan games are played in front of a sea of red-and-white shirts and sales have exceeded even the most optimistic forecasts — with 90 percent of the stock for the whole tournament already gone.

Shirts are being sold as soon as they can be replaced, said Danny Robinson, manager of the Rugby World Cup megastore in Tokyo.

“Everybody loves Japanese jerseys. It’s much, much more than we anticipated.
Every day people are waiting at the door and coming in to grab the jerseys.
So it’s very difficult to keep them on the shelves.
We keep bringing them in every day,” he told AFP.

However, it’s not just Japanese who are snapping up the shirts.
Robinson estimates that around half of the people buying Brave Blossom jerseys are foreigners. 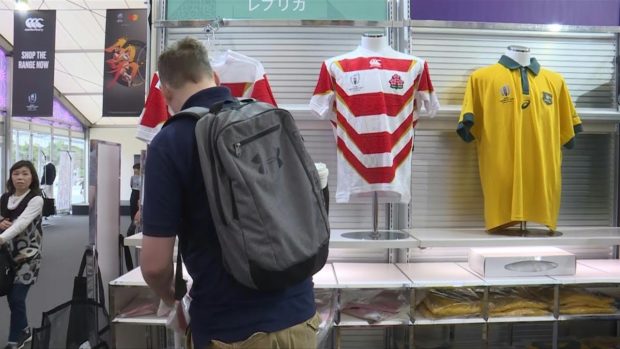 Jesai Knight, an Australian rugby fan, has been searching high and low for his souvenir.

“I came today to get one of those Japanese jerseys.
We came here yesterday at about 9:30 in the morning, and they were sold out already at that point.
And they told us to come back at like 9 o’clock today to get one,” said Knight.

The 38-year-old has also encountered an issue many foreigners living in Japan find infuriating — finding the right size for the Western build.

“I am an extra-large… it was a little difficult,” he told AFP, gleefully snapping up the one XL jersey available.

The availability of Brave Blossom shirts has not been helped by a supply problem with a warehouse in Chiba, to the east of Tokyo, that was affected by Typhoon Faxai a fortnight before the tournament began.

“The warehouse actually lost electricity,” said Robinson.
“So people were picking by hand with flashlights to get the products here.”

The hiccup was resolved “a long time ago” and deliveries are now coming in two or three times per week, he added. 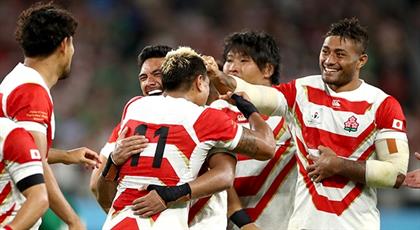 The World Cup has been a bonanza for Canterbury, the company that produces the Brave Blossom shirts along with other rugby gear.

They had forecast sales of 200,000 throughout the tournament — which ends on November 2 — and “90 percent has already been sold”, said Yoshi Katsuta, head of Rugby World Cup operations for Canterbury Japan.

“We are truly sorry” that some fans cannot get their hands on a Brave Blossoms jersey, but such demand was “really difficult to predict”, Katsuta told AFP.

“We expected foreigners to also buy Japan shirts but not on this scale,” he admitted.

Another feature of this World Cup — the first held in Asia and in a non-traditional rugby hotbed — is how the home fans have “adopted” teams and dutifully bought their replica jerseys.

“I’m not sure we’ve ever seen a World Cup where the home fans have supported all of the teams this well,” tournament organizer Alan Gilpin told AFP in a recent interview.

“And the merchandising sales for replica jerseys for every team being bought by Japanese fans is brilliant.”

The famous black shirts of defending champions New Zealand have proved especially popular, not just because they are one of the tournament favorites but also because “the Japanese love the haka”, said Robinson.

Also being snapped up are England, Scotland and Ireland shirts. “I think Japanese rugby fans are showing a kind of ‘no side’ spirit,” enthused Japanese fan Masashi Miho, referring to their respect for the opposition.

“I see them hugging a rival team ‘s supporters once a game is over,” he said, as he went off to buy a New Zealand shirt.