Toxic Vaping Products: Illnesses Spread by Fake Vape Gear.- A short walk from police headquarters in the heart of downtown Los Angeles, a cluster of bustling shops are openly selling packaging and hardware that can be used to produce counterfeit marijuana vapes and CBD cartridges that have infected California’s cannabis market. 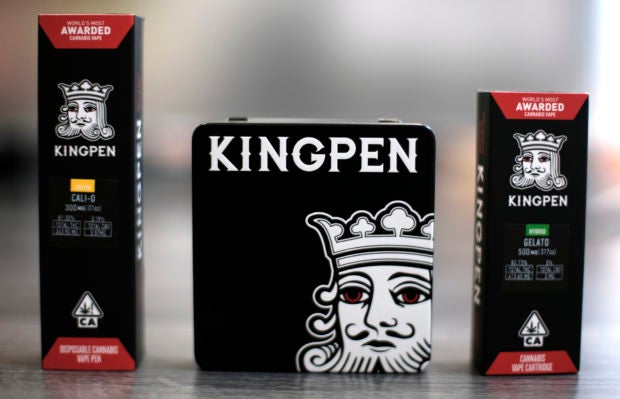 This Tuesday, Sept. 10, 2019, photo shows the new Kingpen packaging, center, flanked by the previous packaging in Los Angeles. Bootleggers eager to profit off unsuspecting consumers are mimicking popular vape brands, pairing replica packaging churned out in Chinese factories with untested, and possibly adulterated, cannabis oil produced in the state’s vast underground market. As a result of the bootleggers, the company had to change and innovate their new packaging. (AP Photo/Richard Vogel)

The result: Authentic-looking vape cartridges sold by unlicensed dispensaries and delivery services, along with rogue websites.

The deceptive rip-offs on the street could be linked to an emerging public health crisis.

Hundreds of people across the U.S. have been sickened, mainly by toxic vaping cannabis oil, and six deaths have been reported.

Public health officials aren’t sure what’s causing the lung issues, vomiting, and other symptoms, but in California, they say most patients reported purchasing vapes from pop-up shops or other illegal sellers that are a pipeline for counterfeit products.

The problem has gotten so pervasive that a major legal brand, Kingpen, is investing millions of dollars to redesign its packaging and product security, The Associated Press has learned. 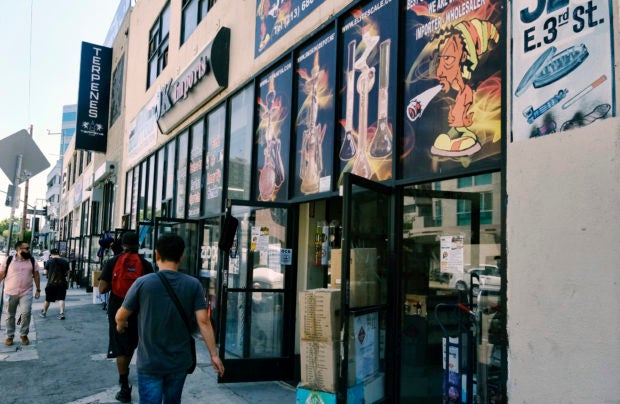 This Wednesday, Aug. 28, 2019, photo shows a bustling street lined with wholesale shops selling marijuana paraphernalia and vape supplies in downtown Los Angeles. A short walk from police headquarters in the heart of downtown, a cluster of bustling shops are openly selling packaging and hardware that can be used to produce counterfeit, and potentially dangerous, marijuana vapes that have infected California’s cannabis market and possibly sickened dozens of people. (AP Photo/Richard Vogel)

The distributor for another major brand, Heavy Hitters, devotes a section of its website to report phonies and has hired a former federal prosecutor, Priya Sopori, to help the company deal with counterfeiting.

“The danger presented by counterfeit products is just a natural result of not having the money, the resources or the people power to enforce licensing,” Sopori said. “Someone is buying this packaging, buying these cartridges and filling them with whatever. It’s being sold as our brand.” 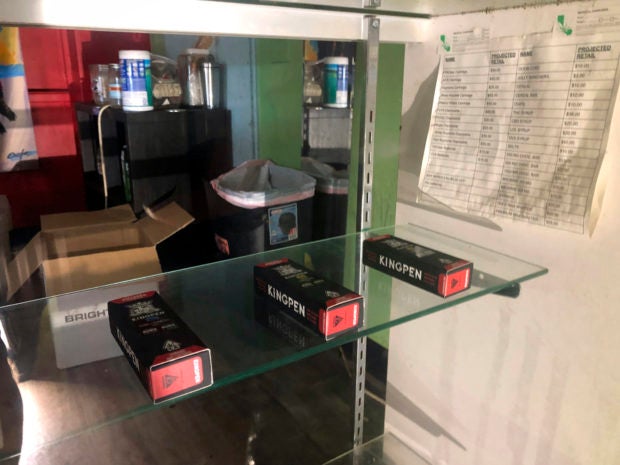 In this Aug. 28, 2019, photograph, boxes of what appear to be Kingpen marijuana vape cartridges are displayed in an illegal dispensary in Los Angeles that was shut down by police. Kingpen is a widely counterfeited brand and the company says it has no contractual relationship with the dispensary, raising the possibility that these products are fakes. Phony packaging and hardware to make Kingpen knock-offs can be purchased in downtown Los Angeles. (AP Photo/Michael R. Blood)

As marijuana has gone mainstream, versions of e-cigarettes that vaporize high-inducing cannabis oil are one of the hottest-selling items, popular for those who don’t want the smoke that comes from lighting up a joint.

In addition, to quickly delivering a high, there’s a perception not supported by science that vaping is a healthier alternative to smoking.

In California’s legal market, the world’s largest, the state requires cannabis oil to be tested before being placed on the shelf for sale.

For example, safety checks are made for the presence of 66 pesticides, mercury, lead and other heavy metals, and 21 solvents that could be used in the extraction process, when oil is pulled from cannabis.

But it can be hard for consumers to tell whether a product they’re buying is made by a legitimate company.

The phony packaging is convincing to the untrained eye, some even carrying bogus labels that appear to carry state-required test results.

Most consumers probably wouldn’t know the difference — until they vape it. The taste and THC levels could be significantly different from the authentic product.

To add to the confusion, consumers can have trouble distinguishing legal dispensaries from unlicensed shops, which in Los Angeles sometimes operate in the same neighborhoods and appear indistinguishable.

“My biggest fear of counterfeiting is people are getting an unsafe product, and illegal product, and think it’s coming from our company, a legal company,” says Bryce Berryessa, a board member of the California Cannabis Manufacturers Association whose company, Skunk Feather, produces concentrates and vape cartridges.

In another warning of consumer risk related to vaping, an Associated Press investigation Monday found that some operators are substituting illegal synthetic marijuana in vapes marketed as natural CBD, a chemical in cannabis that doesn’t cause a high and promises mainly unproven health claims. 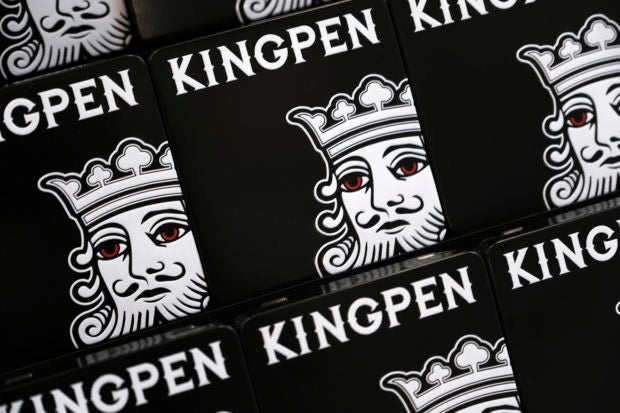 This Tuesday, Sept. 10, 2019, photo shows a display of the new packaging for the cannabis vape pen Kingpen seen at its parent company Loudpack, in Los Angeles. Bootleggers eager to profit off unsuspecting consumers are mimicking popular vape brands, pairing replica packaging churned out in Chinese factories with untested, and possibly adulterated, cannabis oil produced in the state’s vast underground market. As a result of the bootleggers the company had to change and innovate their new packaging. (AP Photo/Richard Vogel)

In storefronts along Los Angeles’ Boyd Street, a narrow commercial strip that has become a de facto bazaar for all things cannabis, there are displays of fake packaging and ready-to-fill vape cartridges for sale for popular brands including Heavy Hitters and Kingpen.

At one shop, the knock-off Heavy Hitter packages were selling for $225 for 100 empty cartridges and boxes; the Kingpen sets sell for $200.

Counterfeit packaging and vape cartridges can also be easily found with a few mouse clicks on Alibaba, China’s largest online commerce company, and other websites.

Once purchased, a counterfeiter would add cannabis oil that is widely available in the illicit market — one recent online ad was selling oil for $6 a gram when purchased by the liter.

It’s not clear who’s behind all the different scales, and California law enforcement agencies have been overmatched by the widespread illegal market.

In Los Angeles, the police department’s chief focus is shuttering an estimated 200 illegal dispensaries across the city, not pursuing the source of fake vapes that might be for sale inside them, Los Angeles Police Department spokesman Josh Rubenstein said.

One recent study estimated that consumers are spending roughly $3 in the state’s underground pot economy for every $1 in the legal one.

And in Wisconsin, authorities uncovered a 10-man operation that manufactured thousands of counterfeit vaping cartridges every day for almost two years loaded with oil containing THC, the high-producing ingredient in marijuana.

A likely link between copycat vapes and the stores that sell them was illustrated on Aug. 28.

An illegal shop padlocked by police in Los Angeles had a display case prominently displaying Kingpen vapes that turned to be Toxic Vaping Products.

The company said it had no relationship with the shop, which was selling vapes at bargain-basement prices, meaning they were almost certainly faking.

Kingpen has taken matters into its own hands, suing Chinese companies that produce fake packaging, sending scores of cease-and-desist letters to businesses that sell them and filing complaints with the state, only to see nothing change regarding Toxic Vaping Products.

“There is no feedback. There is no action,” said Danny Corral, Kingpen manufacturer Loudpack’s vice president of sales regarding the Toxic Vaping Products sold as his own.

Others have gone so far as to hire private investigators to locate illicit suppliers but find dead ends.

That’s led many in the industry to believe the counterfeit operations are an organized, sophisticated practice.

“We have every reason to believe that the same criminal gangs and cartels that dominate the global pharmaceutical counterfeit drug trade will similarly wrestle control of California’s cannabis counterfeit drug trade,” says a report compiled by Mammoth Distribution and submitted to state regulators.

Toxic Vaping Products in the Market

With counterfeits leaching into California’s illegal vape market, the threat for licensed companies is not just millions in lost revenue.

They worry their highly-valued brands could be forever tainted if people get a mouthful of foul-tasting vapor, or even become sick, from a bogus product carrying their name.

To fight off rampant counterfeiting, the parent company of Kingpen is preparing to shelve millions of dollars in packaging and hardware, then spend millions more launching a redesigned product.

Loudpack is partnering with a technology company and this month plans to roll out an anti-counterfeiting program that will allow customers to verify the authenticity of Kingpen products purchased from licensed dispensaries in the state.

The rectangular paper box will be gone, replaced with a square, metal container.

The company’s logo remains, a rendering of a bearded, bloodshot-eyed king, but his face is partially obscured like he is peering around a corner. There is also a unique code so consumers can validate the Toxic Products.

In a statement, the company said it hopes the makeover will give consumers “peace of mind in knowing that any Kingpen product purchased legally is in fact authentic.”