Barbie Celebrates Day of the Dead : Barbie has been many things — from a bathing beauty to an astronaut to even president. Now, she is donning skeleton face paint and a crown of marigolds to honor Mexican culture, but some are crying foul.

Mattel has unveiled a new version of the iconic doll that is inspired by Mexico’s traditional Day of the Dead celebration.

The doll — to be sold for $75 — is based on the famous “Catrina” character drawn by cartoonist Jose Guadalupe Posada in 1912. She wears a black gown decorated with marigolds, butterflies, and skulls.

Diego Rivera also immortalized the character in a mural completed in 1947. 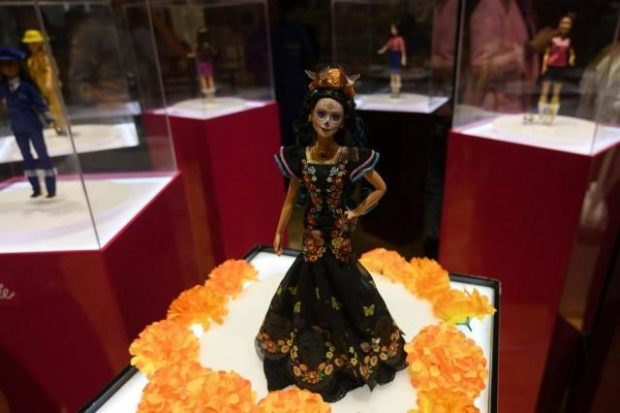 The Day of the Dead festival, celebrated in Mexico on November 1-2, is believed to be when the gateway separating the living and the deceased open, allowing people to pay their respects to those who have passed.

“That the tradition is recognized with this doll, the best known in the world is something that makes me proud,” Mexican toy collector Jaqueline Vidal told AFP in Mexico City, where the collectible doll was officially unveiled on Thursday.

The doll has nevertheless aroused controversy by some who consider it “cultural appropriation” — using a time-honored tradition to make money.

“The design of this Barbie has no elements identical to indigenous clothing,” said Octavio Murillo, director of cultural heritage at the National Institute of Indigenous Peoples (INPI).

More than one billion Barbies have been sold globally since the American brand’s launch 60 years ago.