A showdown between the Los Angeles Lakers and Los Angeles Clippers, likely to feature LeBron James against Kawhi Leonard, will be this year’s feature NBA Christmas game, Lakers News.

Four-time NBA Most Valuable Player James and new teammate Anthony Davis will lead the Lakers against reigning NBA Finals MVP Kawhi Leonard and Paul George of the Clippers as the NBA’s premier pairs display their skills. 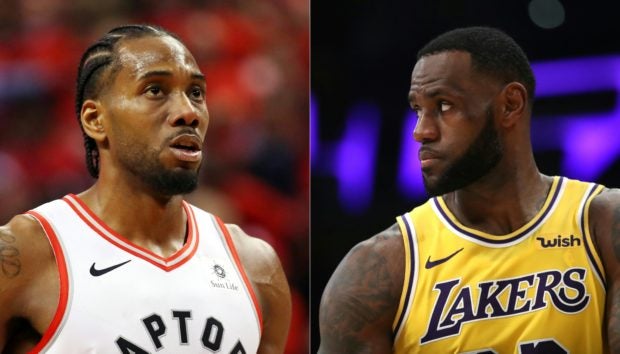 (COMBO) This combination of pictures created on August 02, 2019 shows Kawhi Leonard #2 of the Toronto Raptors reacts in the first half against the Golden State Warriors during Game Five of the 2019 NBA Finals at Scotiabank Arena on June 10, 2019, in Toronto, Canada, and
LeBron James #23 of the Los Angeles Lakers looks on during the first half of a game against the Los Angeles Clippers at Staples Center on March 04, 2019 in Los Angeles, California. – A showdown between the Los Angeles Lakers and Los Angeles Clippers, likely to feature LeBron James against Kawhi Leonard, will be this year’s feature NBA Christmas game, ESPN reported August 2, 2019. (Photos by Gregory Shamus and Sean M. Haffey / GETTY IMAGES NORTH AMERICA / AFP) / NOTE TO USER: User expressly acknowledges and agrees that, by downloading and or using this photograph, User is consenting to the terms and conditions of the Getty Images License Agreement.

For James, it would be a 14th Christmas appearance, two shy of Kobe Bryant’s all-time record. James has scored 338 points on the holiday, trailing only Bryant’s 395 and Oscar Robertson’s 377.

Other Christmas matchups, according to the report, find the New Orleans Pelicans at Denver, Boston at reigning NBA champion Toronto, Houston at Golden State and Milwaukee at Philadelphia.

It would be the first Christmas appearance for Toronto since 2001.

Lebron James Out For Another Week Due to Groin Injury

NBA scoring champion James Harden and new teammate Russell Westbrook would lead Houston into a visit to the Stephen Curry-powered Warriors in their new arena.