DRAFT ALERT - Durant Offered 175 Million and It's Not The NETS

Kyrie Irving has been playing a major role in influencing Kevin Durant to sign with the Brooklyn Nets, It’s surprising how a close friendship is able to influence someone’s decision in such a manner that is taking Kevin away from Golden State, Steph Curry comment earlier today that he will be happy for any decision that Kevin Durant makes, he would love to continue to play with him in the future and bring one more championship home. FILE – In this April 21, 2019, file photo, Golden State Warriors forward Kevin Durant, top, dunks as Los Angeles Clippers guard Landry Shamet defends during the second half in Game 4 of a first-round NBA basketball playoff series in Los Angeles. Rarely relevant at the same time on the basketball court, the Knicks and Nets are front and center in the free agency race, two of the teams best positioned to make a splash when the market opens.
Both can afford two top players, with hopes of landing not only a Kevin Durant or Kyrie Irving, but possibly even both. (AP Photo/Mark J. Terrill, File)

Curry: “of course he will be hard to lose such a great peer friend and inspiration. I consider KD one of the best players on the NBA, definitely a future Hall of Fame holder,  I feel blessed I was able to play with him KD for such a long time, we will all miss him”

The Brooklyn Nets are aware that if they decide to go with Kevin Durant he will be out for the first 15 to 18 games of the season which raises the question: Is it this a good trade for The Brooklyn Nets?

We are not talking a little bit of money here, we are it’s $164 million that the Nets will pay for Kevin Durant on the four year contract these years Kevin Durant is calculated to make $38 million despite his severe injury and rehab time, Irwin will sign four years with the Nets for $141 million Dollars. 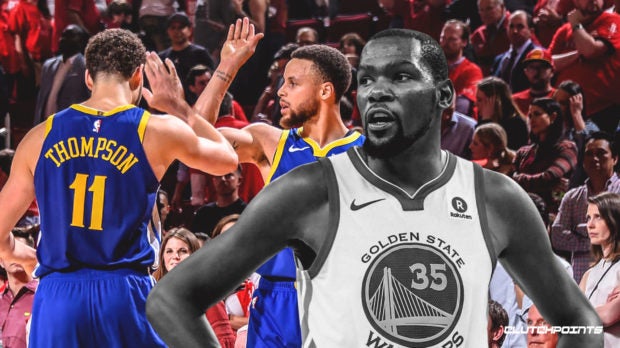 Irwin is putting a timeframe into Kevin to signing the contract with the NETS, as a close source tell those that there is a second team that is talking to Durant in secret and has made a $175 million offer to Durant as the deal with the Brooklyn Nets is not finalized yet.

Durant won titles with Golden State in 2017 and ’18 then was injured for much of the postseason this year as the team lost the NBA Finals in six games to the Toronto Raptors.

A ruptured right Achilles tendon could keep him out the entire next season, and whenever he returns it will be in the Brooklyn black.

ESPN first reported Durant’s decision, saying he had agreed to a four-year deal worth $164 million. Durant could have gotten five years and about $221 million to remain with the Warriors.

Durant, a 10-time All-Star who just completed his 12th NBA season, was leading all postseason scorers at 34.2 points per game when he strained his right calf on May 8 in Game 5 of the Western Conference semifinals against the Rockets. He had seven 30-point performances during the recent playoffs.

It’s unclear how he will play whenever he can return, but the Nets were willing to take a chance with a team on the rise.

CBD 101: Everything You Need To Know.

Brooklyn finished 42-40 this season and lost in the first round of the playoffs, then got a huge victory Sunday when it beat out the Warriors, New York Knicks and Los Angeles Clippers for Durant.

Durant, who grew up in the Washington area and spent one college season at Texas, played his first year with the Seattle SuperSonics before they departed for Oklahoma City, where Durant played eight seasons with the Thunder before joining the Warriors in 2016.

He was heavily criticized for that move, seen as taking an easy route by joining a team that had just won an NBA-record 73 games. But it worked out for Durant and the Warriors, as he was the NBA Finals MVP in their championships in both 2017 and 2018.

This season was filled with talk of his future, though for much of the season it was focused on the Knicks if he decided to leave. But the Nets became a more attractive option with young talent that should help them be competitive next season even while Durant recovers.