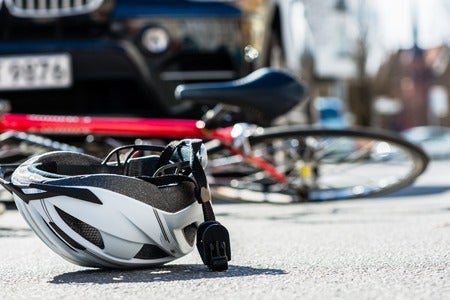 A hit-and-run suspect was arrested after a policewoman made use of social media to help crack the case.

Washington State Patrol (WSP) District 1 public information officer Johnna Batiste implored the public to help solve the case of a cyclist who died after being hit by an unidentified black vehicle.

She made the appeal through a Twitter post on Aug. 9. She included photos of the fallen bicycle, which was damaged during the incident, as well as a part of the unidentified vehicle.

The roadway is open SR7/320th. Troopers and detectives are still looking for a black vehicle believed to be involved in this mornings tragic bicyclist fatality. If you know anything regarding this collision, please call the Washing State Patrol. pic.twitter.com/pafJLeh54i

The photo of the unidentified black vehicle ended up on Reddit the next day after Batiste made the post. The photo was posted in the sub-Reddit “whatisthisthing” which was made to identify unclear objects and creatures.

One Reddit user, JeffsNuts, commented that the unidentified part is a headlamp bezel belonging to a 1988 Chevy Silverado. He also shared a link to the photo of the car’s headlamp bezel to support his claim.

The Reddit user said he was a former Maryland state inspector and has a good knowledge of headlamp adjustments. Because of his background, he was able to determine the decade when the car the part belongs to was made. He said he first suspected that the part belonged to a 1988 Dodge Ram 1500. However, while he was looking at the photos of the said vehicle, he chanced upon a photo of a mid-’80s Chevy truck.

The WSP arrested the suspect not long after the photo was posted in the sub-Reddit. While the Reddit user’s claim did not match the model of the suspect’s car, 1986 Chevy K-10, it did help the police find the previously unidentified vehicle.

“WSP detectives made an arrest today for Thursday’s fatal bicyclist [hit-and-run] in Eatonville,” wrote Batiste on Twitter on Aug. 14. “Reddit users identify a photographed broken car part as a mid-1980s Chevy truck headlight assembly. Local anonymous tip confirms and led to the arrest of a driver of [a] 1986 Chevy K-10.”

WSP detectives made an arrest today for Thursday’s fatal bicyclist hit and run in Eatonville. Reddit users identify a photographed broken car part as a mid 1980s Chevy truck headlight assembly. Local anonymous tip confirms and led to the arrest of a driver of an 1986 Chevy K-10. pic.twitter.com/WaIlkkClfr

Netizens lauded the “collaboration” between the police and Reddit users. One netizen was amazed by the fact that they were able to identify the suspect’s vehicle with the car part.

Insane they figured that out from that little chunk of car! Amazing!

Another netizen praised how social media became instrumental in solving the hit-and-run case.

Look at the internet today, being all useful and everything. Great police work and civilian assist

As one netizen, Melanie De La Cruz (@Mel_Ociraptor), puts it, “Look at the internet today, being all useful and everything.” JB

Man with autism who wants to eat underage girl, make her his sex slave, gets probation