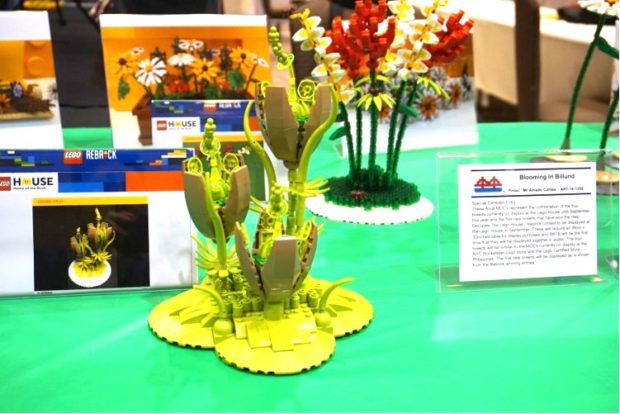 SANTA CLARA, California – It wasn’t too long ago when Amado Canlas (AC) Pinlac was just picking up LEGO parts to tidy up his New Jersey home when his three sons left for high school. Being a “Star Wars” fan and working in IT, Pinlac’s bent for tinkering made him build … LEGO flowers.

Last July, Pinlac picked up the award for clever and innovative use of LEGO parts in the Brick by the Bay LEGO fan convention at the Santa Clara Convention Center.

At the LEGO convention, it wasn’t unusual to find 10-foot models of rockets, functioning moats in castles with piped in music, animated and lighted pumps, robots, futuristic cities, firebase camps in Vietnam and Afghanistan complete with troops detailed in camo, and even Civil War battle fields.

But flowers? Well, Pinlac’s were inspired by Amazon’s pitcher plants and they do look outerworldly in their perfection. Marleth and Amado Canlas Pinlac at the Brick by the Bay LEGO convention in Santa Clara. ROBIN BARKIN

Pinlac says he does have large Star Wars-theme constructs, but the flowers were the result of last year’s LEGO House exhibit theme of nature. He’s one of the first to build LEGO flowers.

He is also one of only 34 LEGO hobbyists to be invited to exhibit at LEGO House in Billund, Denmark last year. And the only Filipino at that.

Bricks by the Bay President Erik Wilson, himself a biochemist when not snapping together LEGOs, said Pinlac’s work “is very artistic.” Wilson cited five of Pinlac’s LEGO flowers exhibited at the convention.

In April, Pinlac and wife, Marleth, took back some LEGO flowers to the Philippines; they are now in a moving display schedule in five LEGO stores in Quezon City. Pasig, Bonifacio Global City, Alabang, and ultimately at the UP Village.

Pinlac has been at it for 15 years now, the first eight years building Star Wars constructs and winning countless awards since then. His creations have popped up in books, magazines, and shared in blogs. He warns that you could get inundated with images of his work if you Google him. The Theed Hangar is his signature Star Wars creation. It was featured in Star Wars: The VisualDictionaryin May 2014 and the Brick Journalmagazine issue number 37 in December 2015. Last year it was exhibited at PlayFair NYC at the Jacob Javits Convention Center in February, the Brick Fair Virginia in August, and Brick Fair New Jersey in September. And then again at Brick Fest Live Philly in April 2017.

He is allowed to work in the basement only. “It will take as long as it gets because you don’t want to rush a work of art. Besides, you get better at it if you keep at it.”

He doesn’t glue or cut LEGO parts (to get a round contour effect). He won’t even use non-LEGO parts to compromise the total effect. He calls using a 3-D printer “cheating to us purists.”

He will use Google, screen shots and photos but won’t project his build on to a grid. He would pick a LEGO part and build on it for scale. Picture a great master painter just eyeballing the model and putting up his thumb for scale, or a hot shot fighter pilot ignoring instrumentation distance read-outs and engaging the target head on.

Pinlac’s electrical engineering degree is from Angeles City. As a proud son of Pampanga, he has embarked on a project to build a LEGO replica of his town’s church. He started work on his LEGO replica of the Holy Rosary parish church (Pisamban Maragul) in February 2016. Pun aside, this is by no means a small feat of engineering. He completed the front façade in April. A couple of months later, he had half the interior done.

But due to his first commitment to exhibit LEGO flowers at LEGO House, in Denmark in September 2017, he stopped. He was also short of one specific part with a specific color.

But as it happened, the trip actually opened up access to LEGO Corporation’s inventory. He got the hard-to-find part and is back at it after bagging the prize in Bricks by the Bay. The front façade of Holy Rosary church was exhibited at the East Brunswick Public Library for the whole month of 2016. The ultimate goal is to bring it home to Angeles City where the Angeles Museum, private groups and others have expressed interest.

He says it’s a work of love and won’t put a price on his efforts and expenses. And like a work of art, Pinlac says, “It will be finished when it is finished.”