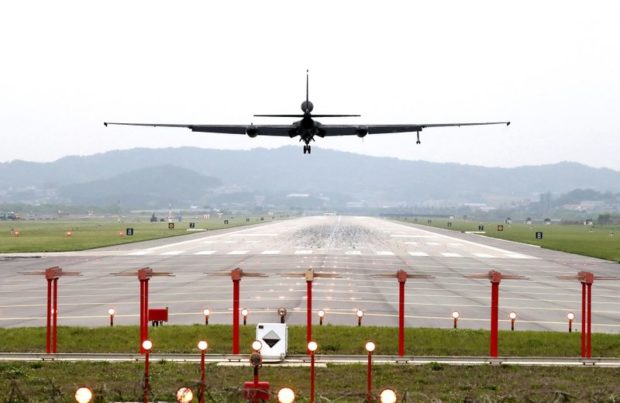 A U.S. Air Force U-2 spy plane prepares to land as South Korea and the United States conduct the Max Thunder joint military exercise at the Osan U.S. Air Base in Pyeongtaek, South Korea, Wednesday, May 16, 2018. North Korea on Wednesday canceled a high-level meeting with South Korea and threatened to scrap a historic summit next month between President Donald Trump and North Korean leader Kim Jong Un over military exercises between Seoul and Washington that Pyongyang has long claimed are invasion rehearsals. AP PHOTO

SEOUL, South Korea— North Korea on Wednesday threatened to scrap a historic summit next month between its leader, Kim Jong Un, and U.S. President Donald Trump, saying it has no interest in a “one-sided” affair meant to pressure the North to abandon its nuclear weapons.

The warning by North Korea’s first vice foreign minister came hours after the country abruptly canceled a high-level meeting with South Korea to protest U.S.-South Korean military exercises that the North has long claimed are an invasion rehearsal.

The surprise moves appear to cool what had been an unusual flurry of outreach from a country that last year conducted a provocative series of weapons tests that had many fearing the region was on the edge of war. Analysts said it’s unlikely that North Korea intends to scuttle all diplomacy. More likely, they said, is that it wants to gain leverage ahead of the talks between Kim and Trump, scheduled for June 12 in Singapore.

Sanders said Wednesday that threats from the North to scrap the meeting were “something that we fully expected.”

Sanders said President Donald Trump is “ready for very tough negotiations,” adding that “if they want to meet, we’ll be ready and if they don’t that’s OK.” She said if there is no meeting, the U.S. would “continue with the campaign of maximum pressure” against the North.

North Korean first vice foreign minister Kim Kye Gwan said in a statement carried by state media that “we are no longer interested in a negotiation that will be all about driving us into a corner and making a one-sided demand for us to give up our nukes and this would force us to reconsider whether we would accept the North Korea-U.S. summit meeting.”

He criticized recent comments by Trump’s top security adviser, John Bolton, and other U.S. officials who have said the North should follow the “Libyan model” of nuclear disarmament and provide a “complete, verifiable and irreversible dismantlement.” He also took issue with U.S. views that the North should fully relinquish its biological and chemical weapons.

Some analysts say bringing up Libya, which dismantled its rudimentary nuclear program in the 2000s in exchange for sanctions relief, jeopardizes progress in negotiations with the North. Kim Jong Un took power weeks after former Libyan leader Moammar Gadhafi’s gruesome death at the hands of rebel forces amid a popular uprising in October 2011. The North has frequently used Gadhafi’s death to justify its own nuclear development in the face of perceived U.S. threats.

The North’s warning Wednesday fits a past North Korean pattern of raising tensions to bolster its positions ahead of negotiations with Washington and Seoul. But the country also has a long history of scrapping deals with its rivals at the last minute.

In 2013, North Korea abruptly canceled reunions for families separated by the 1950-53 Korean War just days before they were scheduled to begin to protest what it called rising animosities ahead of joint drills between Seoul and Washington. In 2012, the North conducted a prohibited long-range rocket launch weeks after it agreed to suspend weapons tests in return for food assistance.

On Wednesday, senior officials from the two Koreas were to sit down at a border village to discuss how to implement their leaders’ recent agreements to reduce military tensions along their heavily fortified border and improve overall ties. But hours before the meeting was to start, the North informed the South that it would “indefinitely suspend” the talks, according to Seoul’s Unification Ministry.

In a pre-dawn dispatch, the North’s official Korean Central News Agency, or KCNA, called the two-week Max Thunder drills, which began Monday and reportedly include about 100 aircraft, an “intended military provocation” and an “apparent challenge” to last month’s summit between Kim Jong Un and South Korean President Moon Jae-in, when the leaders met at the border in their countries’ third summit talks since their formal division in 1948.

Kim Dong-yub, a North Korea expert at Seoul’s Institute for Far Eastern Studies, said the North isn’t trying to undermine the Trump-Kim talks. The North’s reaction is more like a “complaint over Trump’s way of playing the good cop and bad cop game with (Secretary of State Mike) Pompeo and Bolton,” he said.

Seoul’s Unification Ministry, which is responsible for inter-Korean affairs, called North Korea’s move “regrettable” and urged a quick return to talks. The Defense Ministry said the drills with the United States would go on as planned.

Annual military drills between Washington and Seoul have long been a major source of contention between the Koreas, and analysts have wondered whether their continuation would hurt the detente that, since an outreach by Kim in January, has replaced the insults and threats of war. Much larger springtime drills took place last month without the North’s typically fiery condemnation or accompanying weapons tests, though Washington and Seoul toned down those exercises.

The KCNA dispatch said the U.S. aircraft mobilized for the drills include nuclear-capable B-52 bombers and stealth F-22 fighter jets, two of the U.S. military assets it has previously said are aimed at launching nuclear strikes on the North. Seoul has said F-22s are involved in the drills, but has not confirmed whether B-52s are taking part.

In Washington, the U.S. State Department emphasized that Kim had previously indicated he understood the need and purpose of the U.S. continuing its long-planned exercises with South Korea. State Department spokeswoman Heather Nauert said the U.S. had not heard anything directly from North or South Korea that would change that.

“We will continue to go ahead and plan the meeting between President Trump and Kim Jong Un,” Nauert said.

U.S. Army Col. Rob Manning said the current exercise is part of the U.S. and South Korea’s “routine, annual training program to maintain a foundation of military readiness.” Manning, a Pentagon spokesman, said the purpose of Max Thunder and exercise Foal Eagle — another training event — is to enhance the two nations’ abilities to operate together to defend South Korea.

“The defensive nature of these combined exercises has been clear for many decades and has not changed,” Manning said.

Washington and Seoul delayed the earlier round of springtime drills because of the North-South diplomacy surrounding February’s Pyeongchang Winter Olympics in the South, which saw Kim send his sister to the opening ceremonies.

Kim told visiting South Korean officials in March that he “understands” the drills would take place and expressed hope that they’ll be modified once the situation on the peninsula stabilizes, according to the South Korean government.

Despite Kim’s outreach, some experts were skeptical about whether he would completely give up a nuclear program that he had pushed so hard to build. The North previously vowed to continue nuclear development unless the United States pulls its 28,500 troops out of South Korea and withdraws its so-called “nuclear umbrella” security guarantee to South Korea and Japan as a condition for its nuclear disarmament.

Wednesday’s threat could also be targeted at showing a domestic audience that Kim is willing to stand up to Washington. Kim has repeatedly told his people that his nukes are a “powerful treasured sword” that can smash U.S. hostility.

On Tuesday, South Korea’s military said North Korea was moving ahead with plans to close its nuclear test site next week, an assessment backed by U.S. researchers who say satellite images show the North has begun dismantling facilities at the site.

The site’s closure was set to come before the Kim-Trump summit, which had been shaping up as a crucial moment in the decades-long push to resolve the nuclear standoff with the North, which is closing in on the ability to viably target the mainland United States with its long-range nuclear-armed missiles.