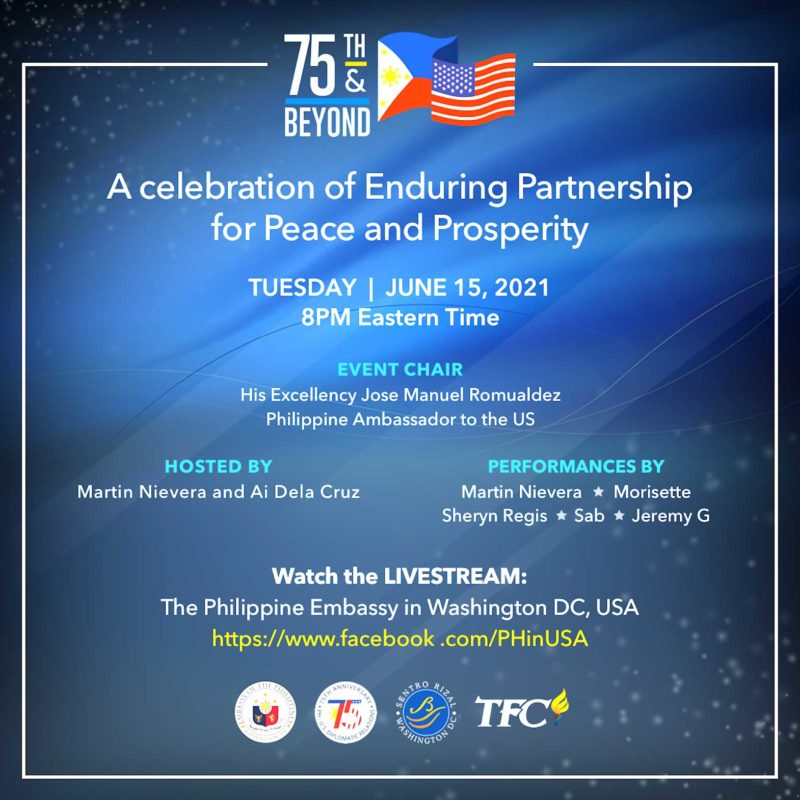 WASHINGTON, D.C. – A musical showcase will mark this year’s grand celebration of the 75th anniversary of the establishment of diplomatic relations between the Philippines and the United States.

Meanwhile, the live reception will be hosted by ABS-CBN North America News Bureau Chief TJ Manotoc.  VIP dignitaries from various countries will be at the reception at the Philippine Embassy on Massachusetts Avenue.

Nievera will also perform virtually from the Philippines and joining him is an elite line-up:

“Many will say that 75 years is a long time to stay as friends, partners, and allies, but I believe this is an undeniable testament to the depth and quality of the bilateral relationship of the Philippines and the U.S.. Our ties have withstood the test of time and have served both our countries and peoples well. This special celebration with TFC captures the essence of our partnership with the U.S.: trusted, enduring, excellent and forward-looking,” said Philippine Ambassador to the U.S. Jose Manuel G. Romualdez.

“ABS-CBN TFC has helped promote not only the best of the Filipino but also cultural understanding between the Filipino and other societies by serving as a connecting bridge on the air and online for over 25 years,” said ABS-CBN North and Latin America Managing Director Jun Del Rosario. “Our participation in this event is to celebrate the goodwill generated by years of mutual understanding.”