A 72-year-old gunman killed himself when approached by police on Sunday, about 12 hours after he had carried out a Lunar New Year massacre at a dance club that left 10 people dead and another 10 wounded.

The gunman tried to carry out another shooting at a separate club just minutes after the first one on Saturday night. Still, authorities said two bystanders wrestled the man’s weapon away from him before any shots could be fired. He fled that scene. 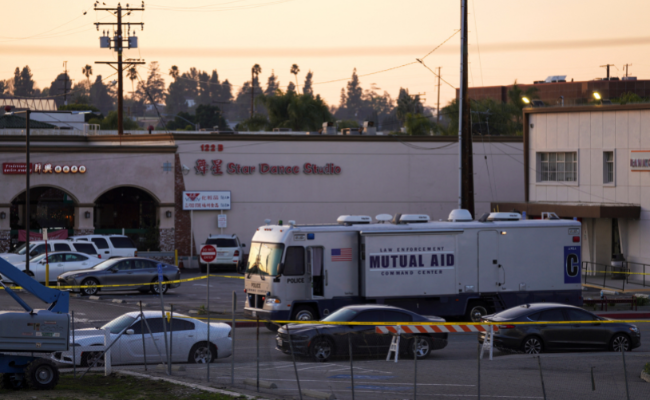 A law enforcement command center is set up at the scene of a shooting that took place at Star Dance Studio during a Chinese Lunar New Year celebration, in Monterey Park, California, U.S. January 22, 2023. REUTERS/Allison Dinner

Investigators did not yet know a motive, although gun violence is frequent in the United States. Luna did not identify any of the victims but said the five men and five women appeared to be in their 50s, 60s, and beyond. The sheriff said the pistol Tran used appeared to be illegal in California, where state laws ban any magazine holding more than 10 rounds.

After police say Tran carried out the shooting in Monterey Park at about 10 p.m. PST on Saturday (0600 GMT on Sunday), bystanders confronted him at a second dance club in the neighboring city of Alhambra about 20 minutes later, Luna said.

“I can tell you that the suspect walked in there, probably with the intent to kill more people, and two brave community members decided they would jump into action and disarm him,” Luna said. People come together in a prayer as members of the community hold a prayer vigil near the scene of a shooting that took place during a Chinese Lunar New Year celebration, in Monterey Park, California, U.S. January 22, 2023. REUTERS/Allison Dinner

The sheriff said that Tran turned a handgun on himself on Sunday as police approached a white van he was driving in Torrance, about 20 miles (34 km) from the site of the shooting at the Star Ballroom Dance Studio in Monterey Park. Officers heard a single gunshot from the van as they approached, then fell back and called for a SWAT team.

Seven of the 10 people injured were hospitalized Sunday night, with at least one person in critical condition.

The shooting took place around the location of a two-day Chinese Lunar New Year celebration where many downtown streets are closed for festivities that draw thousands of people from across Southern California.

Residents stood gazing at the many blocks sealed off with police tape on Sunday in Monterey Park. Chester Chong, chairman of the Chinese Chamber of Commerce of Los Angeles, described the city of about 60,000 people as a quiet, peaceful, beautiful place where everybody knows each other and helps each other.

The city has for decades been a destination for immigrants from China. Around 65% of its residents are Asian, according to U.S. Census data, and the city is known for its many Chinese restaurants and groceries. 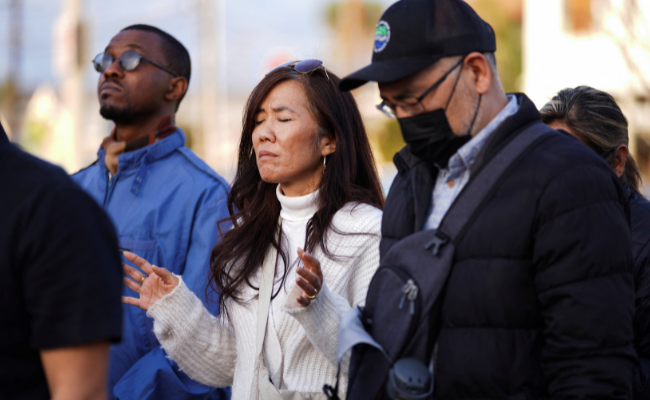 A woman holds her arms up in prayer as members of the community hold a prayer vigil near the scene of a shooting that took place during a Chinese Lunar New Year celebration, in Monterey Park, California, U.S. January 22, 2023. REUTERS/Allison Dinner

“People were calling me last night. They were scared this was a hate crime,” Chong said at the scene.

Most of its patrons are middle-aged or seniors, though children also attend youth dance classes, according to a teacher at the studio who asked not to be named.

“Those are normal working people,” the teacher said. “Some are retired and just looking for exercise or social interaction.”

The gunshots were mistaken by some for new year fireworks, according to Tiffany Chiu, 30, who was celebrating at her parent’s home near the ballroom.

“A lot of older people live here. It’s usually really quiet,” she said. “This is not something you expect here.”

President Joe Biden condemned the killings in a written statement and said he had directed his Homeland Security adviser to mobilize federal support to local authorities.