Trudeau on Tuesday announced a rare written “supply-and-confidence” agreement that will see the NDP prop up his minority government until 2025 in exchange for more social spending.

Top of the list is a dental-care program for low-income Canadians and a national prescription drug plan, both of which will likely be costly, permanent spending initiatives, economists said. Details of the two programs should emerge in the federal budget due to be presented next month.

With the Canadian economy already at capacity and price pressures mounting, incremental spending – even if merited – could complicate efforts to keep inflation expectations moored, said Rebekah Young, director of fiscal and provincial economics at Scotiabank.

“The finance minister risks further undermining Ottawa’s credibility in its commitment to tackling inflation,” she said.

Young expects the pact, which has been denounced by the main opposition Conservatives, will lead to an additional C$15 billion-C$20 billion ($12 billion-$16 billion) in government spending over the life of the three-year deal and potentially C$40 billion in total by fiscal 2026-2027. 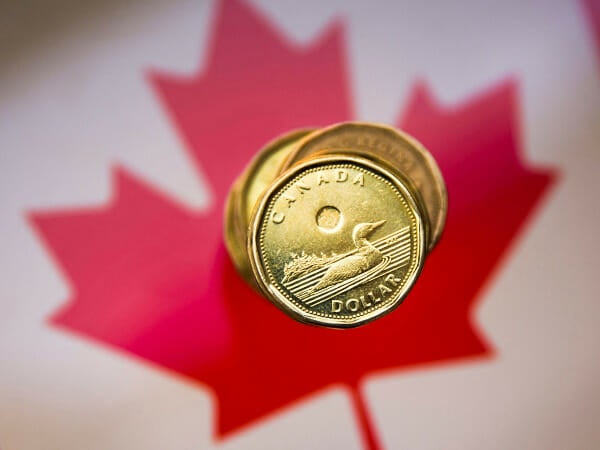 A Canadian dollar coin, commonly known as the “Loonie”, is pictured in this illustration picture taken in Toronto, January 23, 2015. REUTERS/Mark Blinch/File Photo

The jump in tax revenue resulting from surging inflation will likely mask much of the new spending in the near term, she said, but the deal could add half a percentage point to structural deficits over the medium term.

The federal government’s COVID-19 pandemic support programs have already pushed Canada’s debt-to-GDP ratio to a projected peak of 48.0% in 2021/2022 from 30.9% in 2018/2019. It could decline more slowly from there due to the increased spending.

“It does look like it would open the pocket books at the federal level,” said Pedro Antunes, chief economist at the Conference Board of Canada.

Canada, like other countries globally, is grappling with red-hot inflation, which hit a three-decade high of 5.7% in February. At the same time, businesses are scrambling to hire enough workers to meet booming demand.

New federal dental and prescription drug programs would require more specialized workers, who may demand higher wages, which could then create another round of inflation, Antunes said.

“We can start getting to that vicious spiral that we don’t want to be in,” Antunes said.

The Liberals pledged C$78 billion in stimulus over three years during last year’s election campaign. The NDP’s platform had priced a national drug plan at C$38.5 billion over five years and C$11 billion for dental coverage.

Spending under the deal will likely look quite different.

With Canada’s economy firing on all cylinders, analysts say the center-left Liberals should be focused on balancing the budget rather than adding stimulus so businesses do not grow concerned about the possibility of higher taxes.

“The right path is to grow the economy to pay for new spending measures – not the other way around,” said Robert Asselin, senior vice president of policy at the Business Council of Canada.

Adding to swelling expenses is the response to Russia’s invasion of Ukraine, which may prompt Canada to boost defense spending.

“Our investments in our Canadian Armed Forces will continue to increase and we will have more to say about this at the appropriate time,” said Trudeau, speaking at a summit in Brussels to address the Ukraine crisis.

Trudeau said his deal with the NDP will not impact defense spending plans.

(Reporting by Julie Gordon in Ottawa and Fergal Smith in Toronto; Editing by Paul Simao)