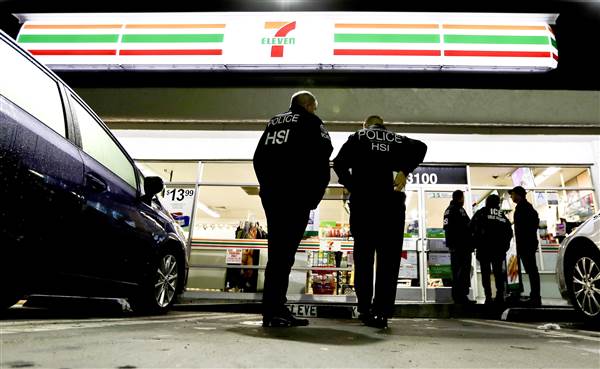 LOS ANGELES — Seven immigration agents filed into a 7-Eleven store before dawn Wednesday, waited for people to go through the checkout line and told arriving customers and a driver delivering beer to wait outside. A federal inspection was underway, they said.

Within 20 minutes, they verified that the cashier had a valid green card and served notice on the owner to produce hiring records in three days that deal with employees’ immigration status.

The well-rehearsed scene, executed with quiet efficiency in, played out at about 100 7-Eleven stores in 17 states and the District of Columbia, a rolling operation that officials called the largest immigration action against an employer under Donald Trump’s presidency.

The employment audits and interviews with store workers could lead to criminal charges or fines. And they appeared to open a new front in Trump’s expansion of immigration enforcement, which has already brought a 40 percent increase in deportation arrests and pledges to spend billions of dollars on a border wall with Mexico.

A top official at U.S. Immigration and Customs Enforcement said the audits were “the first of many” and “a harbinger of what’s to come” for employers.

“This is what we’re gearing up for this year and what you’re going to see more and more of is these large-scale compliance inspections, just for starters,” said Derek Benner, acting head of ICE’s Homeland Security Investigations, which oversees cases against employers.

“It’s not going to be limited to large companies or any particular industry — big, medium and small,” he said.

After the inspections, officials plan to look at whether the cases warrant administrative action or criminal investigations, Benner told The Associated Press.

7-Eleven Stores Inc., based in Irving, Texas, said in a statement that the owners of its franchises are responsible for hiring and verifying work eligibility. The chain with more than 8,600 convenience stores in the U.S. said it has previously ended franchise agreements for owners convicted of breaking employment laws.

Unlike other enforcement efforts that have marked Trump’s first year in office, Wednesday’s actions were aimed squarely at store owners and managers, though 21 workers across the country were arrested on suspicion of being in the country illegally. 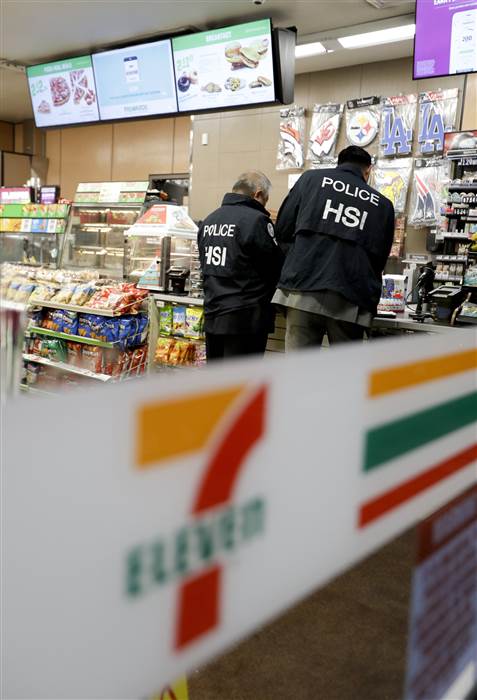 Illegal hiring is rarely prosecuted, partly because investigations are time-consuming and convictions are difficult to achieve because employers can claim they were duped by fraudulent documents or intermediaries. Administrative fines are discounted by some as a business cost.

Amy Peck, an Omaha, Nebraska, immigration attorney who represents businesses, said an employer crackdown will never work because the government has limited resources and there are many jobs that people who are in the country legally do not want.

“When these audits occur, the employees scatter in the wind and go down the street and work for somebody else,” Peck said. “You’re playing whack-a-mole.”

Wednesday’s audits arose from a 2013 investigation that resulted in charges against nine 7-Eleven franchisees and managers in New York and Virginia. Eight have pleaded guilty and were ordered to pay more than $2.6 million in back wages, and the ninth was arrested in November.

The managers used more than 25 stolen identities to employ at least 115 people in the country illegally, knowing they could pay below minimum wage, according to court documents.

Neither 7-Eleven nor was its parent company, Seven & I Holding Co. based in Tokyo, was charged in the case.

Julie Myers Wood, former head of ICE during the Bush administration, said the most recent inspections showed that immigration officials were focusing on a repeat violator. Part of the problem, Wood said, is the lack of “a consistent signal” between administrations that the U.S. government will prosecute employers who hire immigrants without legal status.

“It’s important for Trump to show that they’re not just arresting the hapless schmo from Honduras but also but also the politically powerful American employer,” he said.

In Koreatown, agents gathered in a grocery store parking lot and drove through side streets in unmarked cars to their target location.

The manager was in Bangladesh and the owner, reached by phone, told the clerk to accept whatever documents were served. The clerk told agents he had no knowledge of documents required to prove eligibility to work and was asked to pass along brochures for voluntary programs aimed at better compliance with immigration law