The legal cannabis sector is expected to generate $40 billion and more than 400,000 jobs by 2021 in the United States, according to a study released Tuesday.

The estimate by consulting firm Arcview includes direct purchases by consumers of $20.8 billion and indirect revenue for growers and various subcontractors as well as money spent with businesses not affiliated with the sector, such as supermarkets.

The projection would represent a rise of 150 percent on the $16 billion revenue recorded in 2017, according to the study, released the day after recreational use of marijuana became legal in California.

Arcview and its partner in the research, BDS Analytics, expect $4 billion in taxes to be generated within three years.

The new regime will lead to the creation of nearly 100,000 cannabis industry jobs in California by 2021, about a third of the nationwide figure and 146,000 jobs overall when indirect effects are considered.

Customers and operators in California have complained however about the punitive sales taxes to be applied to cannabis and its derivative products, which can hit 35 percent when state, county and municipal levies are taken into account. 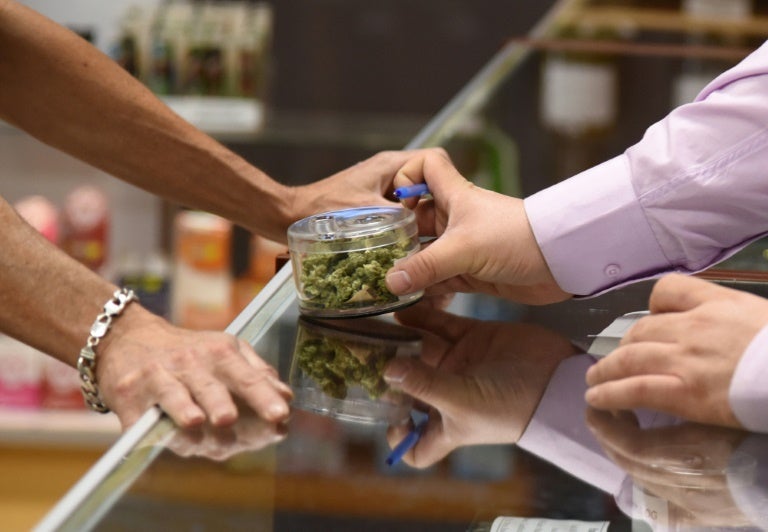 California, the most populous US state, became the largest legal market for marijuana in the world on Monday, and public reaction to the law change has been enthusiastic, with long lines and stock shortages reported at clinics already licensed and open. Image: Robyn Beck – AFP/File

California, the most populous US state, became the largest legal market for marijuana in the world on Monday, and public reaction to the law change has been enthusiastic, with long lines and stock shortages reported at clinics already licensed and open.

Berkeley mayor Jesse Arreguin hailed the reforms at a ceremony on Monday at Berkeley Patients Group, one of the oldest dispensaries in the United States.

“I’m stoked about this historic moment, not just for Berkeley, but for the state of California,” Arreguin said, praising the state for “embracing this new economy.”

Cannabis possession remains illegal under federal law, and Arcview’s Tom Adams said fewer than 100 out of the 3,000 outlets and delivery services operating in California were ready to go with the required local and state permits.

“Those that were [ready to comply] generally report doing multiples of their typical day’s business with a far more diverse and less experienced customer base that need a lot of hand-holding and educating from their bud-tenders,” he added.

“We were very cautious in projecting revenue growth from $3 billion to $3.7 billion in this first year of adult-use legality in California, but we’ll have to revise that upwards if, as now appears likely, San Francisco and Los Angeles are going to get permits issued more quickly than we expected.” NVG

Medical cannabis is safe, says WHO

Why Athletes Use CBD in Sports
Best Cannabis Dispensary Companies
Seniors ask if it’s safe to see their doctors in time of Covid
How risky is dining out during the Covid-19 pandemic?
Does wearing a mask pose any health risks?