19 killed including 9 children in fire at NYC building

19 killed including 9 children in fire at NYC building

Nineteen people were killed, including nine children, and dozens were injured when a fire started by a malfunctioning space heater spread smoke through a low-income building in The Bronx borough of New York City on Sunday, city officials said.

New York City Mayor Eric Adams, just over a week into the job, confirmed 19 people had died from the blaze that broke out around 11 a.m. in the imposing 19-floor Twin Parks North West building which provided affordable housing units and was home to a Gambian community.

Earlier on Sunday, officials said 32 people had been hospitalized with life-threatening injuries and some 60 people were injured in total as smoke drifted through the building on a cold winter morning.

“This is a horrific, horrific, painful moment for the city of New York,” Adams told reporters. “The numbers are horrific.” 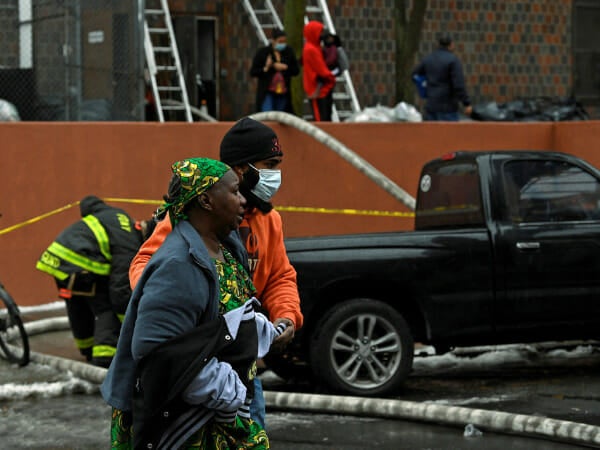 People walk at the scene of an apartment building fire in the Bronx borough of New York City, U.S., January 9, 2022. REUTERS/Lloyd Mitchell

The fire itself started from a space heater in an apartment that spanned the second and third floors of the building, and only made it to the hall, officials said.

But smoke still spread to every floor of the 120-unit building, likely because the door to the apartment was left open, the city’s fire department commissioner Daniel Nigro told reporters at a news briefing.

“Members found victims on every floor in stairwells and were taking them out in cardiac and respiratory arrest,” Nigro said.

Fire marshals had determined through physical evidence and accounts from residents the fire started in a portable electric heater in the apartment’s bedroom, Nigro said. He added the heat had been on in the apartment building and the portable heater had been supplementing that heating. 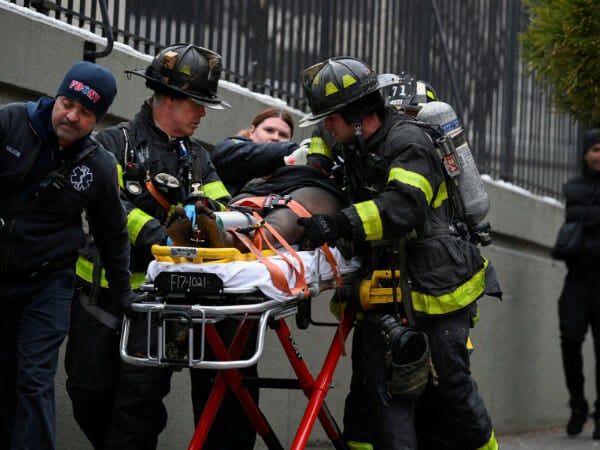 Emergency personnel from the FDNY respond to an apartment building fire in the Bronx borough of New York City, U.S., January 9, 2022. REUTERS/Lloyd Mitchell

The catastrophe was likely to stir questions on safety standards in low-income city housing. This was the second major deadly fire in a residential complex in the U.S. this week after twelve people, including eight children, were killed early on Wednesday when flames swept through a public housing apartment building in Philadelphia.

Adams said many of the residents were from the small west African country of Gambia. The Gambian consulate in New York did not immediately respond to a request for information.

The building did not have external fire escapes, and residents were meant to evacuate through interior stairways, Nigro said. “I think some of them could not escape because of the volume of smoke,” he said.

Some 200 firefighters helped put out the blaze, and some ran out of oxygen in their tanks but pushed through anyway to rescue people from the building, Adams said. 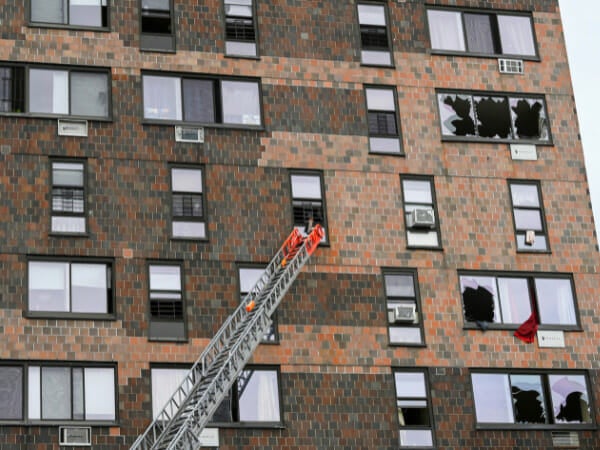 Emergency personnel from the FDNY respond to an apartment building fire in the Bronx borough of New York City, U.S., January 9, 2022. REUTERS/Lloyd Mitchell

“I really want to thank them for putting their lives on the line to save lives,” Adams said.

A Reuters photographer at the scene on Sunday saw emergency responders performing CPR on at least eight people in front of the building. Firefighters with hose lines were working to push smoke out of the building, and one of them was seen breaking a window on an upper floor to release the fumes.

A NYC emergency management official said everyone who needed housing would be registered and would be placed in hotels for an “extended period” until it was safe to return to the building.

Inside a school acting as an emergency shelter, displaced residents sat at tables, dressed in thick coats and with a few belongings huddled around them. Many of the women wore hijabs and several people were on the phone, including one masked woman wrapped in a Red Cross blanket.

A distraught Gambian woman exiting the shelter in heavy rain told Reuters her sister-in-law and her child were missing in the fire. The building was constructed in 1972 as part of a state program to provide affordable housing, a spokesperson for the joint venture said. All 120 units are covered by subsidy programs, the spokesperson said.

The fire alarm system appeared to work as designed and the heat was working, the spokesperson added.

At the Angelo Patri Middle School makeshift shelter on Sunday evening, Frantz Sannon was rushing in to see his parents, who had been living on the fourth floor of the building for years.

Sannon, 45, said his parents must have left their phones in the apartment because he was not able to reach them after learning about the fire.

“I can’t wait to get to speak to them right now,” he said before entering the school.