Oat Milk vs. Almond Milk - Which One is Better for You?

Oat milk vs. almond milk – which one is better for you?

It’s no secret that dairy milk isn’t the best drink for our health. In fact, many people are choosing to ditch dairy milk in favor of plant-based milks like almond milk and oat milk. But which one is better for you? Let’s take a closer look at the benefits and drawbacks of both oat milk and almond milk to see which one comes out on top. 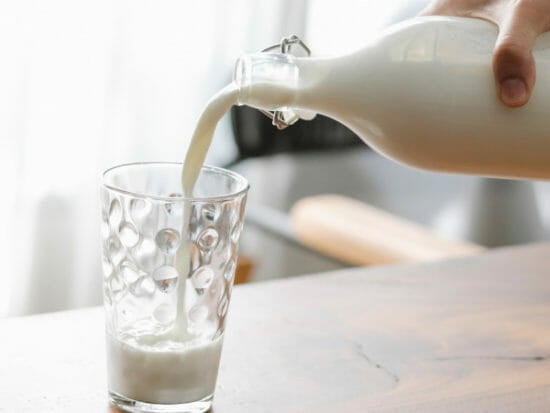 Milk is a good source of protein, calcium, vitamins, and minerals. Its taste and texture are a crowd favorite. After getting so much milk as infants, you would think that adults would grow out of them.

Still, people of all ages enjoy drinking milk, making smoothies, or adding milk to their daily food diet. Even if you’re lactose-intolerant, there is still a milk option for you.

Whole milk is the most commonly found milk in grocery and convenience stores. It has a fat percentage of somewhere between 3.25% to 3.5%.

It’s the closest you might get to drinking raw cow’s milk when it comes to fat percentage. Whole milk has the most calories and cholesterol compared to other types of milk. Some brands also put in added sugar.

Reduced fat and low-fat are sometimes interchangeable. Technically, reduced-fat milk has a fat percentage of 2%, while low-fat milk has 1%. Compared to whole milk, they have fewer calories, saturated fat, and cholesterol. Unfortunately, they also have less nutritional value as Vitamins A, D, E, and K end up down the drain with the reduced fats.

No-fat milk does not contain the same nutritional value as whole or low-fat milk. Its main feature is that it has zero fats, hence, the thin texture of the liquid. It is thinner than your average whole milk’s consistency.

However, it also contains significantly fewer calories and fat. Some have additives, but not all, so be sure to check the label. 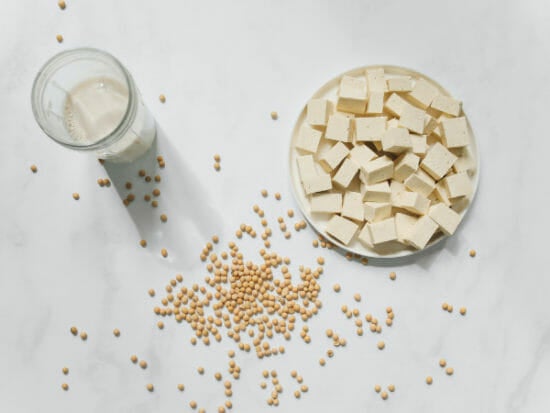 As an alternative to dairy, soy is the most popular type of milk. Soy milk is made from soybeans soaked and then ground up in the water.

Soy contains a lot of protein, roughly the same as whole milk. It also has very little saturated fat and zeroes cholesterol, perfecting diet restrictions. It also happens to be a lactose intolerant individual’s best friend.

Another dairy alternative is nut and seed-based milk like cashew, coconut, almond, and oat milk. These types of milk are free from cholesterol and saturated fats. They contain plenty of vitamins such as Vitamins B12, C, D, and Zinc because they come from natural ingredients. Almond milk is the most common in groceries and one of the most in-demand by consumers. 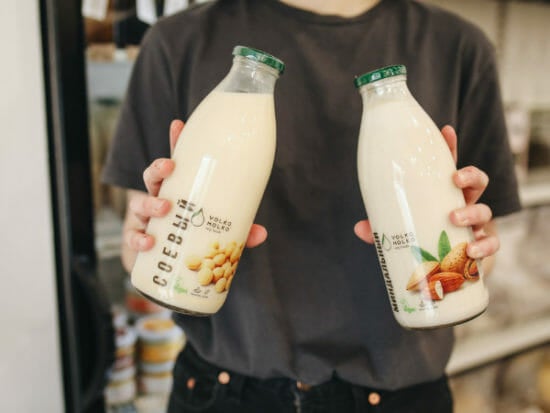 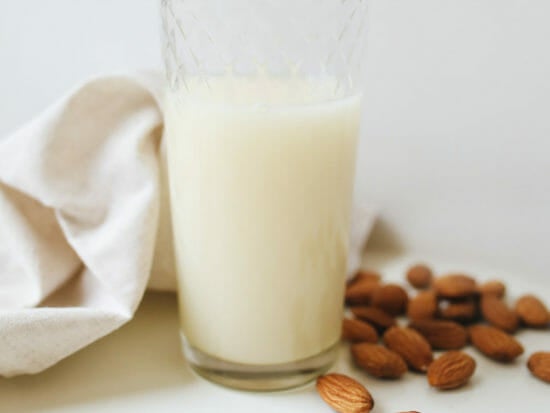 Almond milk is made from almonds and water with some added ingredients, depending on the brand. It has both pros and cons.

Plenty of Vitamin E is found in almonds. It is a good antioxidant that can help fight against carcinogens and slow the signs of aging. The flavonoids present in the nuts can also reduce free radicals in the body and boost your overall immune system.

It contains plenty of vitamins and minerals.

One of the best benefits of almond milk is its wide range of vitamins and minerals. Compared to other types of milk, it has a myriad of benefits. These include copper, zinc, magnesium, potassium, phosphorus, and others.

Good for the heart

Almond milk contains no cholesterol and saturated fats. This means that it won’t damage your cardiovascular health in the long run. It is also high in omega-3 fatty acids to help lower the LDL or the bad cholesterol.

Almond milk is made from almonds grown on trees. This means that no animal by-products are used when manufacturing it. You can even make some in your own home using a food processor or a blender. Some brands may put additives, so be sure to check the label.

Although the production of almond milk uses the least greenhouse gas emissions, it requires plenty of water. It takes 130 pints of water to produce a single glass of almond milk. In California, where 80% of the world’s almonds are grown, water is a huge issue. Farmers are using pesticides to make their crops last longer during droughts.

Not safe for those with tree-nut allergies

Although lactose-free, almonds are still tree nuts. People with allergies to nuts should be cautious when drinking almond milk. Consult a registered dietitian before making any changes to your diet.

Plant-based milk is sometimes less nutrient-dense than whole milk. Processed milk isn’t the same as breast milk or even baby formula. Almond milk isn’t recommended for infants because it lacks the needed vitamins and minerals.

Commercial almond milk often uses thickeners like carrageenan. According to experts, this particular additive may cause inflammation and damage the intestines in the long run. It may also contain sugar or other sweeteners because almonds aren’t naturally sweet. 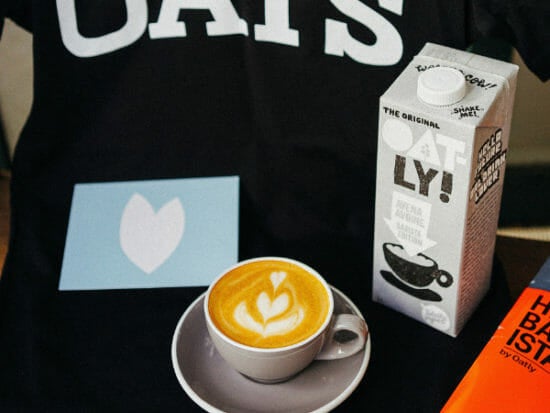 A relatively younger plant-based milk than almond milk, oat milk has been gaining steady popularity since its development in the 1990s. Its thick texture and creamy consistency are similar to whole milk. This is why it has been popularly used as a substitute by millions of consumers. The oaty, slightly nutty flavor is also a crowd favorite.

High amounts of fiber and protein

Protein and fiber help lower cholesterol, promote regular bowel movements, and help in muscle building. Oat is naturally high in fiber and protein, making it a great breakfast meal. Oat milk is a great way to ingest your daily need for fiber and protein in one quick go.

Best for coffee and smoothies

Oat milk’s viscosity and thickness make it the superior choice for coffee and smoothies. Baristas love it because it froths easier and faster than almond milk. It is also good to drink on its own as steamed milk or even just a tall glass before bed.

Oat milk is made from milled oats mixed with water. Due to its heavier texture, it uses less water and doesn’t need thickening additives. It also produces less waste because oats have been around for a very long time. They are low-maintenance and have a long shelf life.

Higher in carbohydrates and calories

One glass of oat milk contains around 130 calories and 25 grams of carbohydrates. If you are on a low-carb diet like keto, you may want to limit your daily or weekly intake of oat milk. It may make you feel full faster and leave you a bit bloated compared to other milk.

Oats are naturally gluten-free, but they can be grown or processed in facilities that make other gluten-containing products. Cross-contamination can happen, but certain brands make sure this doesn’t happen. Look for oat milk that is labeled “certified gluten-free.”

It may contain high amounts of sugar and additives.

Sugar and preservatives are sometimes added to many commercial brands of oat milk. Those commonly stored in stores most likely have these preservatives to have a longer shelf-life. Look for unsweetened oat milk for a healthier alternative.

Healthy Snacks to Buy on Amazon

How Many Calories are in an Avocado?

Which milk is the healthiest? 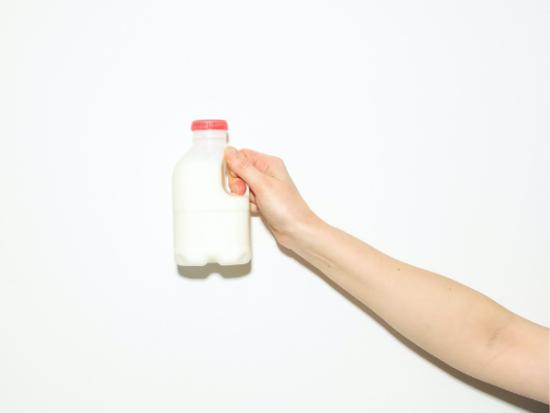 Oat milk is a good source of fiber and essential vitamins and minerals, including calcium, phosphorus, and vitamin D. It also contains beta-glucans, which are believed to have several health benefits, including lowering cholesterol levels and boosting the immune system. However, oat milk is high in calories and carbohydrates, so it may not be suitable for people who are trying to lose weight.