Rittenhouse testifies he 'stopped the threat' at Wisconsin murder trial

Rittenhouse testifies he ‘stopped the threat’ at Wisconsin murder trial

U.S. teenager Kyle Rittenhouse testified in his murder trial on Wednesday that he fatally shot two men and wounded a third with an AR-15-style rifle during chaotic racial justice protests to protect himself after being attacked, at one point breaking down sobbing on the witness stand.

In dramatic and risky testimony in his own defense, Rittenhouse, 18, portrayed himself as wanting to help others by providing medical aid and extinguishing fires during the protests last year in Kenosha, Wisconsin. He said he used his gun only after being attacked and ambushed.

Prosecutors sought to paint Rittenhouse as a vigilante who carried an assault-style weapon into a volatile melee and wanted to use it, asking him about his ammunition and his playing violent video games. 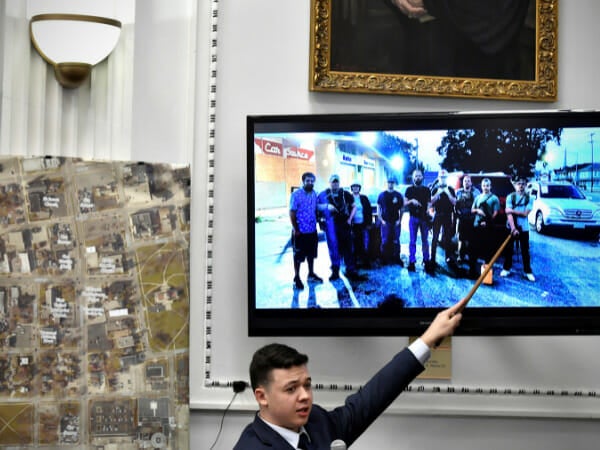 Kyle Rittenhouse points and names people in a photograph taken on the night of Aug. 25, 2020, as he testifies during his trial at the Kenosha County Courthouse in Kenosha, Wisconsin, November 10, 2021. Sean Krajacic/Pool via REUTERS

“I did what I had to do to stop the person who was attacking me,” Rittenhouse said under questioning by Kenosha County Assistant District Attorney Thomas Binger.

“By killing them?” Binger asked.

“Two of them passed away but I stopped the threat from attacking me,” replied Rittenhouse, whose testimony ended on Wednesday in the trial, which the judge said could be finished by Monday or Tuesday. Kyle Rittenhouse listens to his attorney, Mark Richards, as he takes the stand during his trial at the Kenosha County Courthouse in Kenosha, Wisconsin, November 10, 2021. Sean Krajacic/Pool via REUTERS

Rittenhouse is charged in the killing of Joseph Rosenbaum, 36, and Anthony Huber, 26, and the wounding of Gaige Grosskreutz, 27, during protests on Aug. 25, 2020. Rittenhouse, 17 at the time of the killings, has pleaded not guilty.

Rittenhouse has emerged as a divisive figure, with politics coursing through the case. He is a hero to some conservatives who believe in unfettered gun rights and see the shootings as justified during the Kenosha chaos. Many on the left see Rittenhouse as a symbol of an American gun culture run amok.

By the night of the shootings, Kenosha had experienced two nights of tumultuous protests triggered by the police shooting of a Black man, Jacob Blake, who was left paralyzed from the waist down.

Several businesses were burned down and there was looting. Police used rubber bullets and tear gas to control crowds, which included men wearing military-style gear and carrying rifles who confronted the sometimes-violent demonstrators.

Dressed in a navy blue suit and dark blue tie, Rittenhouse initially was composed on the witness stand until his attorney asked him to detail his encounter with Rosenbaum, who he shot four times. Video evidence showed Rosenbaum pursuing and throwing a plastic bag at Rittenhouse before the fatal encounter. Rittenhouse said Rosenbaum grabbed his gun. 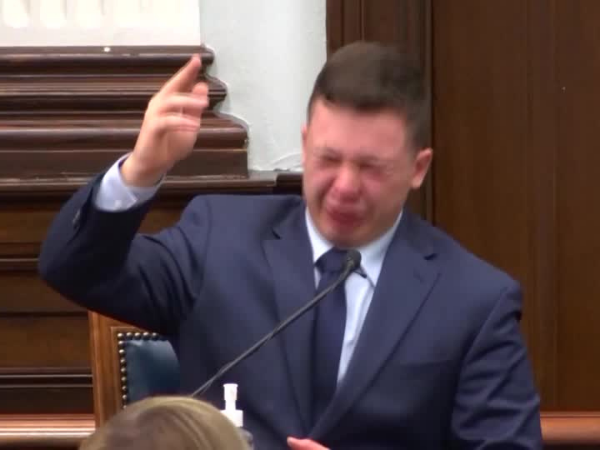 Kyle Rittenhouse, the U.S. teenager charged with killing two men and wounding one other in Kenosha, Wisconsin last year broke down uncontrollably in court on Wednesday while testifying in his own defense about his encounter with one of the men.

“I didn’t notice Mr. Rosenbaum until he came out from behind the car and ambushed me,” Rittenhouse testified, before he started to breathe heavily and lose his composure, shedding tears and sobbing, prompting the judge to call for a break.

Some jurors watched with a look of sympathy as he cried. Rittenhouse’s mother sobbed in the courtroom watching her son.

Earlier in the night, Rittenhouse said Rosenbaum had threatened twice to kill him, first by saying that he would kill the teen if he caught him alone and then telling a group he was with “I’m going to cut your fucking hearts out.” The slain man’s fiance testified that Rosenbaum had bipolar disorder.

Rittenhouse faces a misdemeanor charge of underage possession of his weapon along with five felony counts.

The defense made a motion for a mistrial after Binger asked Rittenhouse about his decision to remain silent until now, as is his right, and about a video recorded two weeks before the shootings in which the teen talked about shooting men he thought were shoplifting at a pharmacy.

Kenosha County Judge Bruce Schroeder had already ruled the video inadmissible. He erupted at Binger after the jury left the courtroom and said he would consider the mistrial motion.

“When you say you were acting in good faith, I don’t believe you,” the judge said to Binger.

The prosecution pressed Rittenhouse about why he took it upon himself to carry a gun and offer assistance normally provided by local authorities in a hazardous situation.

The teen, who had taken some first aid courses, brought a medical kit and testified to helping people with minor injuries. He said he was there to help guard a used car dealership.

“I brought the gun for my protection,” Rittenhouse testified. “I didn’t want to have to kill anybody that night.”

Rittenhouse said when he shot Rosenbaum he had his earlier threats in his mind and was also rattled by a gunshot fired nearby by another man, Joshua Ziminski. Rosenbaum had also wrapped his red shirt around his head, obstructing his face.

Binger repeatedly asked Rittenhouse about whether he understood the power of his rifle and that Rosenbaum and the others could have similarly viewed him as a threat. While acknowledging Rosenbaum was unarmed, he responded that he had no choice.

“I pointed at him because he kept running at me and I didn’t want him to chase me,” Rittenhouse said. “I continued to shoot until he was no longer a threat to me.”

Rittenhouse said he shot Huber, who had swung a skateboard at him, because he pulled at his rifle, and fired at Grosskreutz, who was armed with a handgun, because he had pointed the pistol “directly” at the teen’s head.

(Reporting by Nathan Lane in Kinosha and Maria Caspani in New York; Editing by Will Dunham and Grant McCool)