Tesla Inc shares rebounded on Wednesday, after a multi-day selloff endangered the electric-car maker’s position in the $1 trillion club after top boss Elon Musk polled Twitter users about selling 10% of his stake.

As of Tuesday’s close, the company had lost nearly $200 billion in market value since Monday following Musk’s poll, more than the combined market capitalization of General Motors Co and Ford Motor Co.

Despite the recent selloff, the stock is still up more than 50% for the year, with shares around levels they had breached in a late-October rally that catapulted the company above the trillion-dollar threshold.

The selloff was spurred by Musk’s poll over the weekend asking his Twitter followers if he should sell 10% of his stake in Tesla. Nearly 58% of them backed a sale.

Much is made lately of unrealized gains being a means of tax avoidance, so I propose selling 10% of my Tesla stock.

Do you support this?

Investors are keeping a close watch on Tesla filings with the U.S. Securities and Exchange Commission (SEC) for any clues on the share-sale plans. The SEC rules give companies four working days to report major events.

Hedging activity from market makers, who may have taken the other side of at least a portion of these trades, was likely responsible for exacerbating the rally and the latest tumble in Tesla, the report said.

With the bulk of open Tesla call options set to expire this week and next, there is a “not negligible” risk that further options-driven selling will lead to a larger pullback for the stock, Vanda’s analysts wrote.

The pullback in Tesla’s shares has come while Wall Street awaits the debut of Amazon.com Inc-backed EV maker Rivian Automotive Inc, which was set to fetch a valuation of nearly $107 billion on Wednesday, with its shares indicated to open more than 60% above their offer price on the Nasdaq. 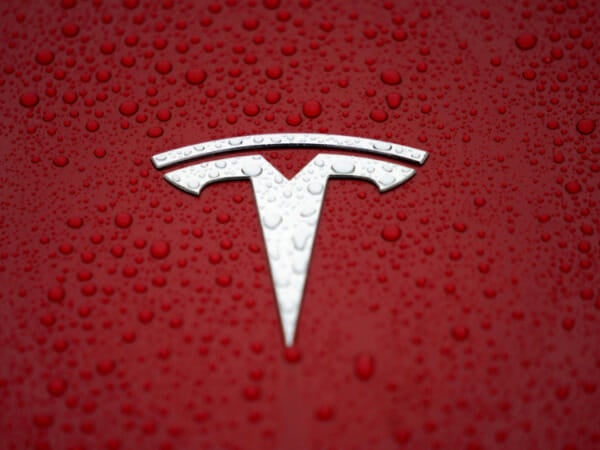 A Tesla logo is seen at the Tesla Shanghai Gigafactory in Shanghai, China January 7, 2019. REUTERS/Aly Song

Wall Street’s biggest institutional investors are betting on Rivian to be the next big player in a sector dominated by Tesla amid mounting pressure on automakers in China and Europe to eliminate vehicle emissions.

Four former and current Tesla board members, including Musk’s brother Kimbal Musk, filed to sell nearly $1 billion worth of shares late last month, according to filings and market data.

“A CEO asking his followers if he should sell a large number of shares is never going to reflect well in the share price. Doing so a day after his brother has sold a large number just compounds investor fears,” said Craig Erlam, market analyst at Oanda.

“That said, we need to take Musk with a pinch of salt and investors may quickly view this as a dip buying opportunity.”

While the reaction to Musk’s possible sale of 10% of his stock has pressured shares, “the company itself is on fire, with strong results,” said Tim Ghriskey, a senior portfolio strategist at New York-based investment management firm Ingalls and Snyder. “That is not going to fade quickly.”