President Joe Biden on Monday sought to assure world leaders the United States would fulfill its promise to slash greenhouse gas emissions in half by the end of the decade, but a setback at home heightened uncertainty about his ability to follow through.

Biden joined leaders from over 100 countries in Glasgow for the start of the COP26 climate conference, which kicked off on the heels of the G20 summit in Rome that concluded with a statement that urged “meaningful and effective” action on climate change but left huge work for negotiators to ensure an ambitious outcome.

Biden, who succeeded former president Donald Trump in January, pledged earlier this year that the United States would cut its greenhouse gas emissions 50-52% by 2030 compared with 2005 levels. The White House has expressed confidence it can achieve that, even as a bill that would help further those goals languishes in Congress, with a key senator on Monday withholding his support, for now. 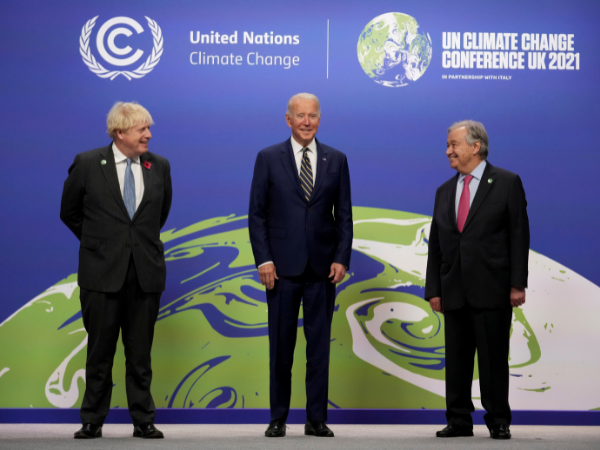 Biden wanted to show to the world that Washington could be trusted to fight global warming despite changes in policies between Republican and Democratic administrations that have undermined its pledges in the past.

“We’ll demonstrate to the world the United States is not only back at the table but hopefully leading by the power of our example,” he said. “I know it hasn’t been the case, and that’s why my administration is working overtime to show that our climate commitment is action, not words.”

Trump withdrew the United States from the Paris climate accord, dealing a blow to international efforts on the subject while he was in office. Biden rejoined when he became president.

“I guess I shouldn’t apologize, but I do apologize for the fact the United States, in the last administration, pulled out of the Paris accords,” Biden said at a separate COP26 event. 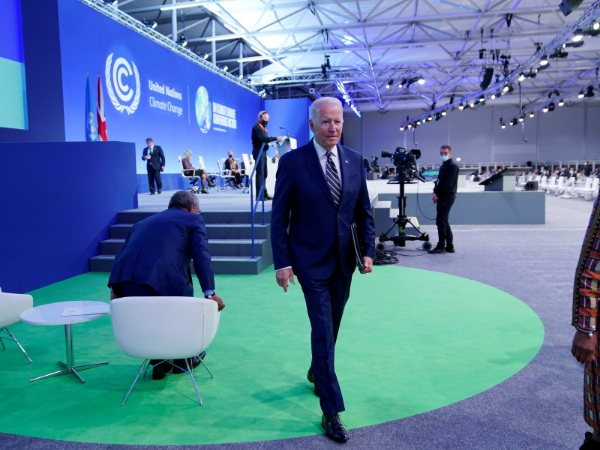 As Biden was meeting with world leaders in Scotland, moderate Democratic Senator Joe Manchin announced he would not yet support a $1.75 trillion legislative framework that is central to achieving the president’s emissions reduction goals.

National Climate Adviser Gina McCarthy said ahead of Biden’s arrival in Glasgow that the bill would unleash $555 billion in climate spending, the largest investment to combat global warming in U.S. history, and allow the country to reduce emissions well over a gigaton or a billion metric tons by 2030.

Biden announced a long-term strategy laying out how the United States would achieve a longer-term goal of net-zero emissions by 2050.

In his COP26 speech, Biden said the world needed to help developing nations in the climate fight.

Biden plans to work with the U.S. Congress to launch a $3 billion program in 2024 aimed at helping developing countries adapt to and manage the impacts of climate change through locally led measures.

“We’re confident that the Supreme Court will confirm what those have before them, which is EPA has not just the right but the authority and responsibility to keep our families and communities safe from pollution,” McCarthy said.