The four would-be citizen astronauts poised to ride a SpaceX rocket ship around the globe as the first all-civilian crew launched into orbit said on Tuesday they were eager for liftoff on the eve of their flight, feeling only “the good kind” of jitters.

“I was just worried that this moment would never come in my life. Let’s get going, let’s do it,” said Sian Proctor, 51, a geoscience professor, artist and lifelong space enthusiast who was a 2009 finalist in NASA’s astronaut candidate program before she was cut.

Proctor also disclosed she and her flightmates received a telephone call from one of her personal heroes, former first lady Michelle Obama, wishing them well, an honor she said “would stay with me the rest of my life.” 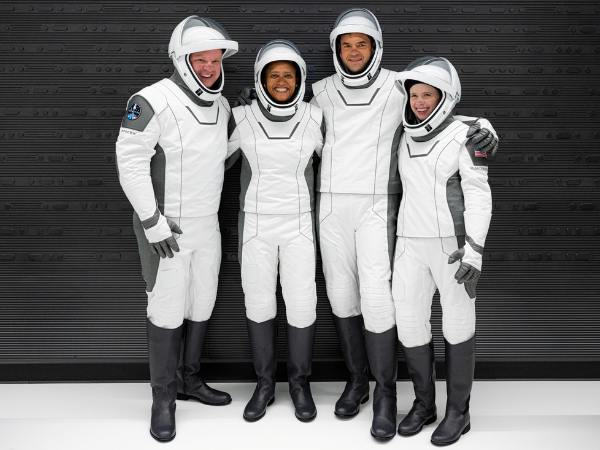 The “Inspiration4” quartet are due for liftoff as early as 8 p.m. on Wednesday (0000 GMT) from launch complex 39A at the Kennedy Space Center in Cape Canaveral, Florida, for an orbital flight expected to last about three days before splashdown.

Behind them, visible in the distance through the hangar’s open doors, stood the SpaceX Falcon 9 rocket and Crew Dragon capsule designed to carry them to a targeted orbital altitude of 360 miles (575 km) over the Earth – higher than the International Space Station.

That is far beyond the inaugural astro-tourism flights made this summer by SpaceX rivals Virgin Galactic and Blue Origin, which carried their respective billionaire founders – Richard Branson and Jeff Bezos – along for the ride.

Those two suborbital trips, while high enough for their crews to experience a few moments of microgravity, were over in a matter of minutes.

Isaacman, founder and chief executive of electronic financial services company Shift4 Payments Inc, is the mission’s originator and benefactor, having paid Musk an undisclosed but presumably enormous sum to fly all four crew members into orbit.

Musk joined in on a pre-flight “check-in” call on Tuesday, “and did give us his assurances that the entire leadership is solely focused on this mission,” Isaacman told reporters when asked about pre-launch nerves. “No jitters, just excited to get going.”

Teslabot – everything you need to know

Arceneaux, a childhood bone cancer survivor who now works with young lymphoma and leukemia patients at St. Jude Children’s Research Center in Memphis, Tennessee, which the Inspiration4 mission was designed largely to promote, said she was “just so excited.”

“Any jitters are the good kind,” she added. “I’m just waiting for tomorrow to get here.”

Joining Tuesday’s event was at least one retired NASA astronaut, Catherine “Cady” Coleman, 60, a veteran of two space shuttle missions who spoke up to wish the Inspiration4 crew well, telling them: “We want to welcome you to the family.”

MOST READ
usa What is the easiest language to learn?
usa Comparing Covid vaccines – which one is the best?
usa Burning of PH flag in Montreal seen as possible hate crime
usa Pope names U.S.-based Filipino priest to Vatican’s social sciences academy
usa What is international health insurance?
usa The national adoption of Bitcoin: Is your country next?
usa What are Dapper Dino NFTs?