Tesla Bot - everything you need to know I INQUIRER.net USA

Elon Musk finally unveiled the Tesla Bot at last month’s press event. Tesla Bot is a humanoid robot run by artificial intelligence that’s capable of doing labor duties. Standing at 5-foot-8, 125 pounds, it transpires as a bit creepy. Nevertheless, Musk was unfazed and said he is going full aboard on the idea.

According to Musk, this bot is capable of carrying 45 pounds and lifting 150 pounds. However, its travel capacity is only 5 mph.

Musk added, “We’re setting it such that it is at a mechanical level, at a physical level, you can run away from it and most likely overpower it.” 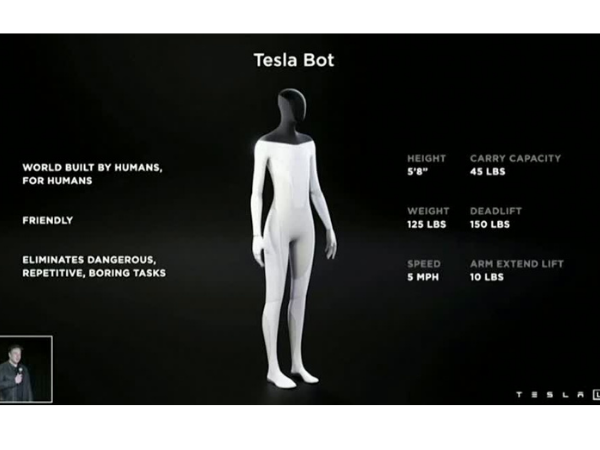 Tesla CEO Elon Musk on Thursday said the company would probably have a prototype of a humanoid robot called “Tesla Bot” by 2022, saying the robot would “eliminate dangerous, repetitive, boring tasks” now performed by humans.

Tesla Bot’s success is a game-changer

Elon Musk never stops reaching new progressive heights in the world of technology. Whether it’s re-imagining space travel or producing a self-driving car, he never dreamed small. Will Tesla Bot become a success? Assess the autonomous car for some hints.

Join us to build the future of AI → https://t.co/Gdd4MNet6q pic.twitter.com/86cXMVnJ59

As Musk plans to power the bot with Tesla’s driver-assist software, it doesn’t have the best record on the track. On some occasions, the software caused a self-driving Tesla car to bump into a parked emergency vehicle. Tesla hasn’t released any official statement on this occurrence.

While some believe Tesla Bot is just for publicity pulling on some applause, some also believed it wouldn’t come to life. If ever Musk pulls it off and produces a prototype, it can be a total game-changer in the tech world. Tesla Bot can be a handyman or a housekeeper that will be a big help to households. Only that, Tesla’s biggest challenge is how people will accept these changes much more into their homes.

All about Tesla Bot

Tesla’s CEO vision of a slender robot is fully powered by Tesla’s Full Self-Driving computer and eight autopilot cameras. Tesla Bot will walk and interact with the surroundings. It will also show a display that users can restore information from and communicate with the humanoid robot.

I will not be able to ensure that robots made by other companies are safe, but I can try my best to do so at Tesla.

Tesla’s Autopilot software and the cameras will aid the bot to feed in the neutral network produced for its Full-Self-Driving software. The neural network would help a Tesla vehicle examine its surroundings, analyze images and routes, and resolve what to do if there are any obstacles.

Musk said, “Our cars are semi-sentient robots on wheels. It kind of makes sense to put the software onto a humanoid form.”

Musk designed the Tesla Bot to manage “dangerous, repetitive, and boring tasks.” It fits more as a servant and not a superhero doing simple chores such as shopping and cleaning your house. It’s intended to perform these tasks and operate in a friendly manner.

Tesla’s CEO showed a visual presentation of the Tesla Bot’s figure, but they haven’t built a real functioning bot yet. Musk said the prototype would be ready sometime next year.

Musk also said the robot fits perfectly into Tesla’s mission and will use the same materials as Tesla cars.

Though Musk hasn’t given a tentative release date for Tesla Bot, he gives assurance of future production. During Tesla’s Autonomy Day in 2019, Musk confirmed that Tesla would have 1 million robot taxis by the end of 2020. However, Tesla hasn’t launched a fully autonomous car, as its software still requires a licensed operator. Tesla Bot is just in its early stage, and with the ramifications of building a robot, it can’t be expected anytime soon.

LATEST
Gas price at $5 tips some US rideshare drivers to wrap cars in ads
Missed break payments should be timely paid and reported in pay stubs
Digital World board receives subpoena over Trump’s social media deal
Ethereum holds its breath for the mean and lean ‘merge’
US recession overshadows outlook for global growth
Juul e-cigarettes to be ordered off U.S. shelves – WSJ